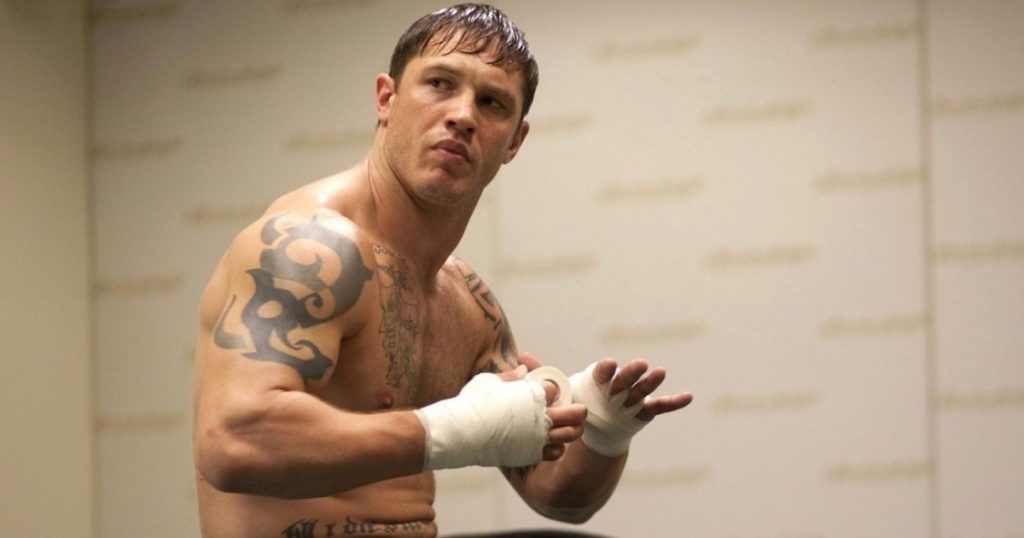 I was listening to a podcast recently looking back at Christopher Nolan’s Inception, and the hosts mused about Tom Hardy, what an impact his presence had on the film, and whether this was his breakout role in Hollywood.

There’s no doubt that even in an ensemble as well-assembled as this, his presence shone. One of the hosts suggested Hardy should be a bigger movie star, that Inception made that case for Hardy’s charisma, but also that he’s been choosing weird indie projects—like his cable series Taboo—rather than capitalizing on the opportunity Inception provided. If that’s true, I suspect Venom and its box-office success has changed that. 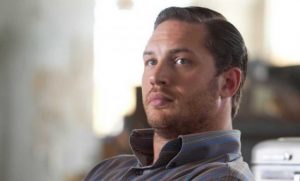 It made me think, in this year of Venom, a pretty crummy movie that’s been inexplicably and globally popular, what are Tom Hardy’s best roles in his best films? Here’s a chronological rundown of 10 recommended, with a few added also rans and upcoming titles, and two at the end better forgotten.

No one argues Tom Hardy’s gifts. The British thesp’s intensity in a variety of roles has been well established, even before Hollywood casting directors took notice. Following the early misfire that was Nemesis (more on that later), he worked in British TV and found small roles in films like Layer Cake and Marie Antoinette. His talent wouldn’t be denied, and 2008 was a particularly good year. Guy Ritchie’s gangster picture isn’t considered one of his best, but it does deliver that quippy, authentic wide boy energy that infused his celebrated pictures Snatch and Lock, Stock, and Two Smoking Barrels. A solid cast, including Idris Elba, Thandie Newton, and Gerard Butler, really lifts it. Hardy’s Handsome Bob is gay, which is unusual for these kinds of genre pictures, and he shines in the part.

Maybe the first Nicolas Winding Refn picture I saw, a biopic about the most notorious convict in the British penal system. For the first time, Hardy’s physicality and slightly unhinged charisma was put to great use. He feels a little like Oliver Reed reborn, and even though there are moments when you’ll ask yourself why anyone would tell a story about such an appalling character, there’s no denying Hardy’s potency on screen.

Christopher Nolan’s dream epic was the first time in a real blockbuster where Hardy showed off his world-crushing charisma. If you didn’t know his work, this role here would have you asking, “Who is that guy?” It’s the beginning of a (so far) three-film run of Nolan-Hardy collaborations.

Hardy further solidified his presence on the up-and-coming lists with this role, the regretful, love-lorn agent in the twist-filled Tinker Tailor Soldier Spy. The sprawling, gloomy John le Carré adaptation had a small role for practically every respected young male actor in Britain at the time (see Cumberbatch, above), and landed Gary Oldman an Oscar nod, but it was Hardy who really impressed. Here he shows  a surprising vulnerability for someone who seems built to have such a tough-guy presence.

I have to admire Hardy’s instincts when it comes to trying new things, and working outside his comfort zone—both with mainstream Hollywood product and indie fare. Here he plays the estranged brother to Joel Edgerton and estranged son to a terrific Nick Nolte. The film indulges in a few overt sports movie cliches, but it’s hard to argue with them when they work, and as a family drama the emotional performances carry the day.

The voice was a big part of the character of Bane, a villain in another big-time Nolan blockbuster, largely because he speaks behind a mask. I thought Hardy had a terrific presence in this as the antagonist, but it does begin the pattern of Hardy choosing roles where his face is covered for most or all of the picture. It’s strangely perverse, but it’s the case here, in Mad Max: Fury Road, and Dunkirk. 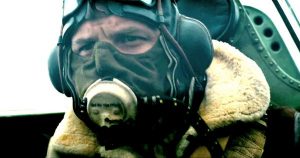 It’s like he’s trying to cover up one of his key assets, a handsome mug, something other leading men like Johnny Depp and Colin Farrell have both tried to do through their careers with make-up and bad wigs. I’m not sure what the psychology is, other than to indicate a lack of vanity, as if that’s a sure sign of acting credibility. It’s laudable, but it can also feel like an affectation. It’s not hard to believe that Hardy has a conflicted relationship to fame, and that being a marquee movie star is much more of a burden than being a respected character actor. Maybe that has something to do with these decisions. Or it could just be a coincidence—the films in question are great ones.

If I had any doubt about Hardy’s versatility and star presence, his title role in the amazing Locke blew that away. He spends the entire film in a car driving on a British freeway through the night, speaking (in a Welsh accent) on the phone to family and colleagues, and that’s where all the action is—we don’t see anyone else in the film. It shouldn’t work, but it was 2014’s best suspense thriller, and it’s hard to imagine anyone else in the role, being able to hold our attention in the same way.

The film reboots the Mel Gibson post-apocalyptic road warrior for the franchise director, George Miller. It had a snowball’s chance of being nearly as good as the more-than-30-year-old originals, and yet it was a triumph, one of the greatest action pictures ever made. One of the picture’s many surprises was that Charlize Theron is the ostensible star, with Hardy offering terrific support to her Furiosa.

Legend was only so-so, but Hardy is terrific as the twin gangsters in 1960s London, lifting the material past the limitations of its screenplay. I confess to being a fan of the last version of this story, The Krays (1990).

John Fitzgerald in The Revenant (2015)

The film earned Hardy an Oscar nod for Best Supporting Actor as the grimy, twisted antagonist in this epic western. Well-deserved, I thought, especially as he stole every scene he was in opposite Leonardo DiCaprio, who ended up winning the Oscar that year.

It’s hard to know how Hardy chooses his roles, but by my metric the guy has made many more smart choices than bad ones. And he smartly stepped away from projects like Suicide Squad, Terminator: Genysis, and Black Mass, none of which turned out too well.

He’s pretty good in John Hillcoat’s little-seen gangster/western amalgam, Lawless (2012), with a script by Nick Cave. At this point, Hardy seems to have absorbed every mumbly, downbeat performance by the masculine greats, the Brando/Hackman/DeNiro/Pacino/Rourke/Penn line, so those kinds of roles fit him like a glove, especially as his accent work is sharp so he convinces as an American.

He delivers another one of these parts in The Drop (2015), opposite James Gandolfini. The film didn’t make much of a lasting impression on me, but it’s good to see these two performers share the frame. Hardy’s in the fascinating musical London Road (2015) as a cabbie, which is blink-and-you’ll-miss-it brief, but he does sing, and the film is terrific.

I haven’t caught up with everything the actor has made. The Soviet-era thriller Child 44 (2015) is unseen by me—the reviews weren’t glowing, but with a cast including Gary Oldman, Paddy Considine, and Jason Clarke, there must be something to recommend it. And, of course, Hardy’s supporting presence enriches Nolan’s Dunkirk (2017).  Hardy has dialled it back a little since his peak year of 2015, preferring to do TV series like Peaky Blinders and Taboo—both interesting in their own way. 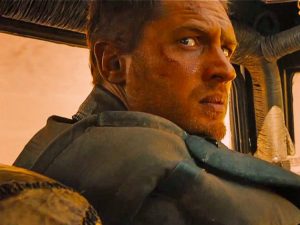 A Mad Max sequel entitled The Wasteland has been announced with the indefatigable George Miller back in the director’s chair, and Hardy’s set to star in Fonzo, an Al Capone biopic from Josh Trank. It’s amazing that filmmaker can get any film made, following the disastrous Fantastic Four, but Hollywood can be forgiving, especially to dudes. Hardy is also slated to be in an Andrew Dominik (Killing Them Softly) picture about Navy SEALS, called War Party. 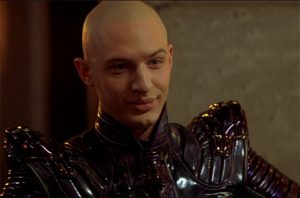 Hardy’s first major part, it should’ve been a springboard to stardom, but the young Hardy missed the gravitas he’s earned with age. His character is Jean-Luc Picard’s clone and the ostensible villain. Opposite veteran performer Patrick Stewart, Hardy seems overawed, all sweaty alienation and theatrics. It’s frankly hard to believe him as a younger version of Picard since they don’t really look alike, even with added prosthetics. It doesn’t help any that the film doesn’t soar, a disappointing conclusion to this key era of the Star Trek mythos. 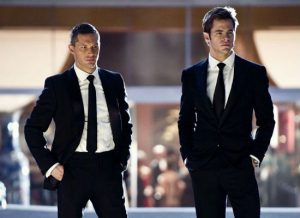 A romcom/spy spoof, with Hardy opposite Reese Witherspoon and Chris Pine. In 2012, Hardy and Pine were both officially hot commodities, but it’s hard to understand why either would take a part in this creepy, unfunny picture. Hardy never really relaxes, which means Pine’s all-American style makes the bigger impact. Honestly, I can’t even remember which guy Witherspoon’s character ends up with, if either of them. I admit the problem could be that I watched this on a plane, never the ideal place for anything to really sink in.