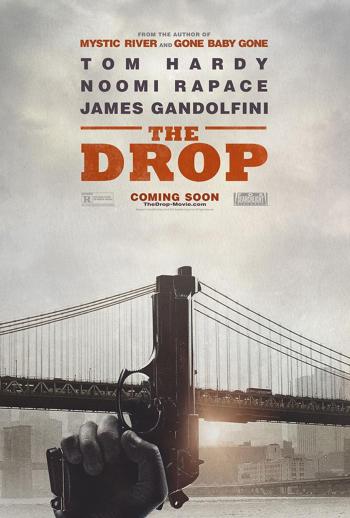 Anyone familiar with Denis Lehane’s other grimy gangster tales brought to the screen—Mystic River and Gone Baby Gone, for example—will recognize the world of The Drop from the get-go. We hear the prevailing myth off the top: Bob Saginowski (Tom Hardy) explains in a voice-over that Brooklyn tough guys like to launder their ill-gotten gains through neighbourhood bars, different joints on different nights.

Cousin Marv (James Gandolfini) used to be a tough guy, he used to be respected and feared, but when the Chechens moved in and stared him down, he blinked. Now they own the bar with his name on it, where he and Bob just serve drinks. Marv’s soul has been bleeding out in a steady stream ever since.

This is a part of Brooklyn where some claim to have killed people just to burnish their rep, and where some abuse puppies and drop them into garbage cans. Bob finds a dog in a sad state and tries to take on the responsibility of a pet with the help of a woman with ties to bad people, Nadia (Noomi Rapace). And when the bar is held up, a cop starts to sniff around—played by John Ortiz, the best bad guy the Fast & Furious franchise ever had. He doesn’t get much from Marv or Bob, but he knew he wouldn’t. He knows how this place works.

As do we all. Secrets are kept around here, and men don’t get old in this town without carrying around a duffle bag of regrets. They might have killed someone that one time. They live with it.

A twist lies in The Drop‘s third act, but anyone paying attention to the way the camera moves and insinuates won’t have any trouble figuring it out. Roskam isn’t doing much here that you won’t have seen many times before, and Lehane’s story doesn’t offer up too many surprises.

What makes The Drop worthwhile is the performances. Hardy adds to a sterling body of recent work. I can’t think of another leading man in Hollywood with his versatility or magnetism. First impressions of Bob are that he may be shallow and simple, but it becomes clear as we go along that he has a lot more going on beneath the surface.

And Gandolfini, in his last feature role, is typically powerful. He’s also as large as I’ve ever seen him, his earlobes creased, sucking on cigarettes like he has nothing to lose. It’s certainly a testament to his gift as an actor that he suffers so convincingly, but watching the man breathe heavily, knowing his life is measured in months, perhaps weeks, from the film’s last shot, gave the The Drop more of an emotional impact with me than it may have had otherwise.