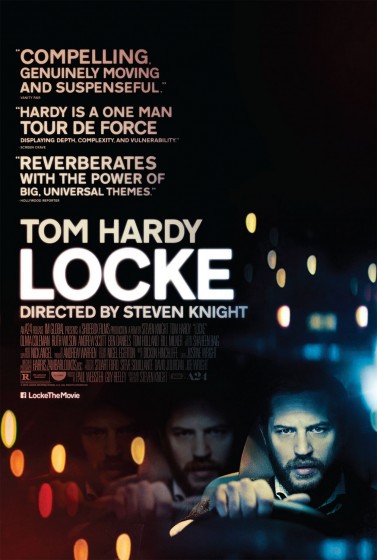 Written and directed by Steven Knight

I make a big deal about it when a quality film doesn’t get distribution in cinemas here in Halifax, but I also understand the reticence of distributors—some feature films just don’t have that crowd-pleasing vibe. And I get that the people making decisions might consider Locke and wonder whether anyone would want to watch a movie set almost entirely in a car. But this is one of those times I wish they had a little bit more imagination than usual: Locke is one of the best movies of 2014—now out on VOD, DVD, and Blu-Ray—and it would have been really cool to see on the big screen.

Ivan Locke is a Birmingham construction manager. It’s around 9pm on the night before a huge “pour”, the day when the concrete goes in to the foundation of a skyscraper. Everything has to be perfect—all the equipment has to work and the roads need to be managed for the hundreds of trucks to come and go to the site. Locke’s got nine years of excellence on his record; he’s reliable, professional.

But instead of preparing for his big day, he’s on the highway, driving to London. In London there’s a woman having a baby.  He needs to be there. And at his home, where his wife and two sons are watching a soccer match, he’s expected for dinner.

So, really, even though we spend all our time in the car, the film has at least three other locations. We may not see them, but we can easily imagine the details of a construction office, a hospital in London, and Locke’s suburban home, all through the desperate voices of the people on the telephone. And when Locke isn’t putting out fires, he’s talking with the demonic spirit of his judgmental father in the back seat, someone only he can see.

Steven Knight is a terrific filmmaker and screenwriter, fascinated by the urban UK nightscape in films such as Dirty Pretty Things, Redemption aka Hummingbird and Eastern Promises. His characters are lost in the dark, caught somewhere between their responsibility, their reputation, and circumstance. Ivan Locke is making a decision he knows will blow holes through his life with every phone call he makes, with every kilometre he drives, but he has no choice, really. He’s wrestling both what he’s inherited and what he will leave behind. Locke feels a little like a Martin Scorcese picture, distilled, Anglisized, and slammed behind the wheel.

As the director of this precise exercise in suspense, Knight does everything he can with the camera to create a dynamic environment, using sound, music, and a constantly shifting focus to bring us into Locke’s car and his state of mind. For a film with one unchanging location moving through space, it’s not about claustrophobia, the way Buried or Phone Booth were, it’s about a journey. And it works so well at no time do you feel like you’re missing out by not being anywhere else. Locke is a perfect short story of a film, but no less powerful because of its limitations. Maybe even more so.

Would Locke have worked at all if it wasn’t for Tom Hardy in the lead? Probably not. The actor is absolutely electric, as he was in Bronson, Warrior, and Inception. He adopts a strong Welsh accent for Ivan Locke, which in my head evokes both Richard Burton and Anthony Hopkins. And I’d say Hardy, now 36, is as good as either of those actors at that age. He’s the next in line.