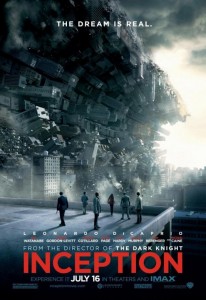 As I write this, August 2010 is about to turn to September. The summer is nearly done, and as such we can look back at the silly season of Hollywood film and assess what worked and what didn’t. To be frank, I’m still catching up on the good, the bad and the ugly, so any call I make tonight would be a bit ill-informed.

What I will say, without fear of contradiction, is that Christopher Nolan’s Inception was the most exciting film of the season.

Now, I didn’t love it outright, like I did his 2008 summer blockbuster The Dark Knight. But I can’t deny it was an exceptionally clever script, and for a large-scale action movie, challenging in a way I’ve not seen in ages. It kept me guessing, wondering, puzzling, throughout its running time and for days afterward.

What didn’t I like about it? In its effort to be a most excellent heist picture, it fell into the trap of turning characters into their jobs and not much more. Thankfully, the casting was bang on, so the charm of actors such as Joseph Gordon-Levitt and Tom Hardy and Marion Cotillard shone through a certain sameness in their character moments. The otherwise delightful Ellen Page was saddled with some tough exposition where she was forced to explain elements of the movie we should have been able to piece together ourselves while watching the thing.

All that said, I haven’t talked about a movie as much as Inception since An Education, an entirely different kind of movie that also provoked a lot of conversation. Which is what I love.

So, anyway. Here’s a link to a piece on Cinematical—thanks to Adam Auch—discussing various interpretations of the plot and its possible problems. I haven’t had these particular discussions of plot holes with people, but I enjoy reading these dissections. I like when people take this shit seriously.