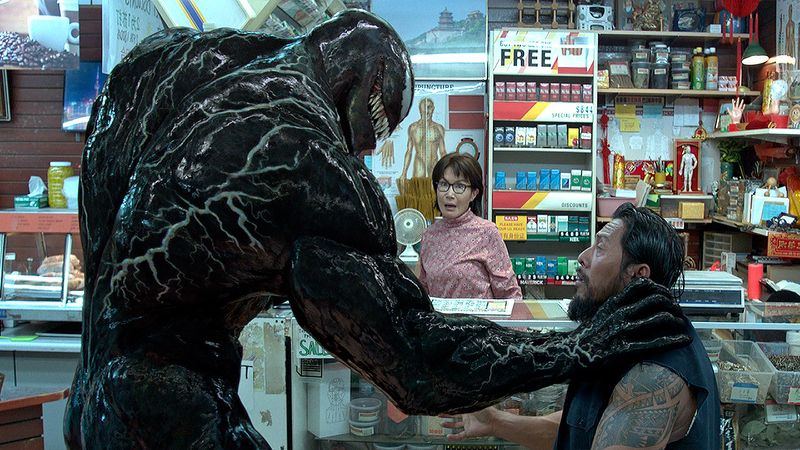 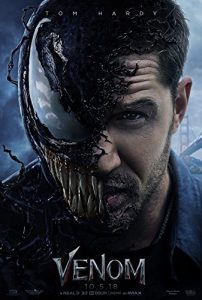 I bailed out of reading Marvel comics just as Venom became a thing. I recall his arrival as Spider-Man’s alien super-suit from Secret Wars and his rapid transformation into a villain, but when Todd McFarlane worked at Marvel as an artist and then a writer, the publisher seemed more interested in sales gimmicks and embossed covers than doing anything interesting with the characters. McFarlane’s art was very stylized, lots of curlicues and ropey textures, something modern CGI easily recreates, but his writing didn’t wow me. The comics at the time felt soulless, and Venom works hard to recreate that vacancy. 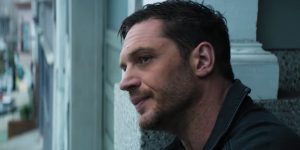 But not from the start—at first it shows a little promise, largely in the presence of its lead and antagonist. You put two of Hollywood’s best performers, Tom Hardy and Riz Ahmed, front and centre, and at least you’ll have something to hold the interest. Hardy’s Eddie Brock is a dogged muckraker with his own TV show in San Francisco—a bit of a local hero. He’s also an aggressively fidgety presence, and not above snooping in the email of his lawyer fiancé, Anne (Michelle Williams, lost here), for dirt on one of her clients, the Elon Musk-esque industrial genius Carlton Drake (Ahmed). One of Drake’s extraterrestrial ships has picked up a collection of amorphous life forms—symbiotes, they’re called. They can’t survive on earth without bonding with a local organism. And, wouldn’t you know it, that’s what happens to Brock and the one called Venom when Brock is brought into Drake’s lab by an ethically compromised scientist (Jenny Slate). 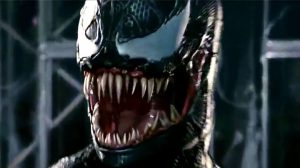 This is all pretty familiar territory if you know the story of another Marvel character, the Hulk. It’s about the monstrous, destructive id hiding inside the body of a kind man until he gets angry and lets it loose. Here Venom has a terrifying form and a terrible hunger. Where the Hulk comparison doesn’t work is that Brock isn’t very kind—he’s edgy, unpleasant, and largely unsympathetic. There’s an opportunity for real character growth in his arc, and Williams offers some kind of redemption, but that’s not really what Venom is concerned with. The movie just wants to set up the next CGI-slathered action set-piece, none of which are anything to write home about. Once we establish our characters, the dialogue, plotting, and stakes all feel about as tasty and deep as cardboard. And this is a hell of a cast—the filmmakers have to go to real trouble to utterly waste someone as fun as Slate.

By the time Brock is infected with Venom, and the alien parasite starts to talk to him with a voice like Sean Connery with a lisp, the plot mechanics feel hollow. Straining to get out but failing is an R-rated horror comedy, something closer to Deadpool—Hardy commented in the media his favourite material from this film was cut out, and you have to think it was that stuff that kept it from being PG-13. If you want to see how an R-Rated movie about a dude possessed can work, go watch this summer’s Upgrade starring Hardy look-alike Logan Marshall-Green. So much fun. This, however, is not. And no surprise, it’s pointless and gloomy-looking in 3D. 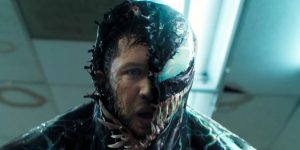 Todd McFarlane always seemed like someone more concerned with baseball memorabilia than character, completely disconnected from the deep hurt and nerdy insecurities of the kids who are actualized through their love of superheroes. Venom feels just like that, like it was made by a committee of dudes with no understanding for what people really love about costumed superheroes or rampaging monsters. I’ll be surprised if there’s a sequel.