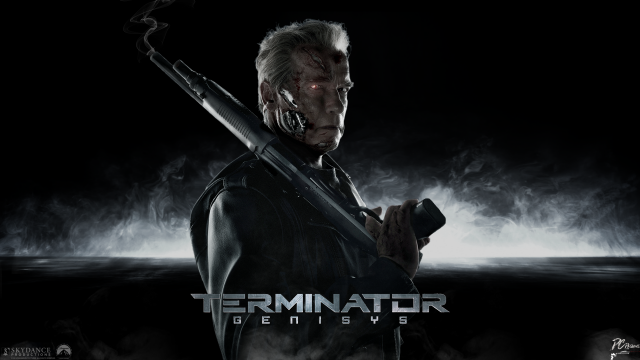 Directed by Alan Taylor, written by Laeta Kalogridis and Patrick Lussier, with characters by James Cameron and Gale Anne Hurd

I’m a fan of time travel pictures, post-apocalyptic visions, and stories of how our tech will destroy us, so James Cameron’s The Terminator and Terminator 2: Judgement Day scratch multiple itches with me.

Then things start going south. The franchise has been going wrong for awhile now, the last one in 2009 a shadow of what made the first two movies so special. When plans for a trilogy of movies set in that terrible killer-robot future of Terminator: Salvation  were scrapped, I figured the franchise was done.

But no. Here we are again, with a picture helmed by Game of Thrones veteran and Thor: The Dark World director Taylor.

And of the three (more than three, really) things I enjoy about these films, only one part really worked for me with Genisys: the time travelling. It’s pretty damn ambitious on that subject. Genisys twists the franchise’s established timelines into a very complicated pretzel, to the point where the cast spends a lot of time trying to explain it. It still left a bunch of questions, too, but let’s assume if this picture does well enough we’ll get answers in the next couple of sequels, for what that’s worth.

While ambition can make up for a lot, it’s too bad so much of Terminator Genisys otherwise feels totally counterfeit. Like JJ Abrams’ Star Trek movies, this isn’t much more than fan fiction feature filmmaking, and I’d say less well-made than those, though Taylor does have a similar affection for lens flare. How much you enjoy such exercises may be directly related to your relationship with the source material. Purists will likely be turned off. It’s hard to imagine anyone feeling this is any kind of improvement over what went before. 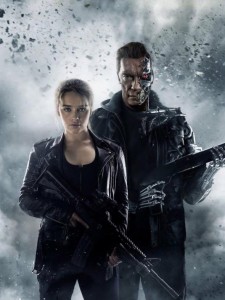 The first 20 minutes serve as a prelude to the opening of the original Terminator, where we get to see more of what happened in 2029: John Connor (Jason Clarke) choosing to send Kyle Reese (Jai Courtney) back in time to protect Connor’s mother, Sarah (Emilia Clarke, best known to Game of Thrones fans as dragon queen Daenerys Targaryen), from a Terminator (Arnold Schwarzenegger), a cybernetic organism also sent back through time by the computer overlords Skynet to kill her and thereby make sure John Connor never exists.

But just as Reese is about to leap through time, he sees Connor attacked by a man with strange powers (Matt Smith, a former time traveller from another dimension), and suddenly he has memories from two separate time streams. When he arrives in 1984, things are not what he expected: He’s attacked by a T-1000 liquid metal Terminator (the model introduced in Terminator 2: Judgement Day) and Sarah Connor is prepared for him, saving him instead of needing to be saved, with the help of an aging T-800 Terminator she calls Pops (Schwarzenegger again), who came back to protect her in 1973 when she was a child. 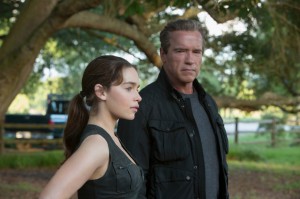 But from what future, you might ask? This franchise is lousy with futures, and where Pops comes from is something the movie refuses to tell us. But this T-800 has the know-how to build a time machine, which Sarah intends to use to go forward in time to prevent Judgement Day in 1997. He’s exceptionally helpful, going so far as contradicting his statement from Terminator 3: Rise of the Machines about being obsolete.

Based on Reese’s adjusted memories, the warrior from the future convinces Sarah to travel to 2018 instead, to another timeline where Skynet is about to go live with a cloud service called Genisys, which promises to unite all your peripheral devices, from your car to your tablet. Does that sound sinister? It should. This is how Skynet intends to bring on Judgement Day in that future. Better late than never, right? And it has a trick up its genocidal sleeve; a surprising ally.

I spent most of the second act of the movie trying to piece together the convoluted timelines, something I generally enjoy about this kind of genre. But even as I flatter myself I’m fairly well-versed in these kinds of stories—go here to listen to my podcast on time-travel pictures—even I found it a struggle to piece it all together.

And despite the cleverness/confusions of the script, the return of Schwarzenegger to the franchise, and the effort to create a direct connection to the 1984 original, Terminator Genisys has none of the style or hard-hitting fun of James Cameron’s film, nor its sequel. 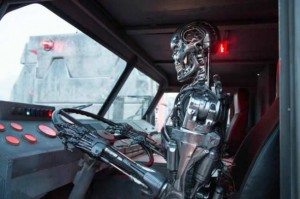 Part of the problem is this is a PG-13 movie—I can’t think of a single example of a franchise where they’ve gone from an R-rated original to a PG-13 sequel and it’s been improved by the attempt to reach a larger audience. And Taylor directs this with little personal style, just a lot of CGI effects and action set-pieces we’ve seen done as well or better in a dozen other movies.

Furthermore, while Clarke does a fine Linda Hamilton impression, especially in her vocal inflections, the script roundly fails to put her in its centre, instead offering Courtney as the largely boring hero of the thing. And he’s got none of the tortured determination of Michael Biehn’s original Reese, none of the feeling of coming from a hopeless, terrifying place. 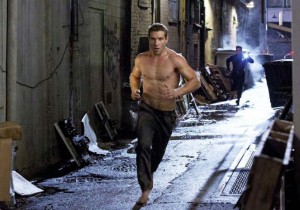 Given the massive collaborative effort that any film must be to succeed, I’m loathe to single out an individual performer, but I can’t understand why Courtney keeps getting hired in blockbusters like this. He seems entirely absent star charisma, and I don’t see much that’s distinctive in his acting.

For his part, Schwarzenegger offers mostly comic relief as another reprogrammed robotic bodyguard. Along with the pleasure of seeing him fighting a CGI version of himself as a younger, beefier Terminator (improved since the one sketched up for Terminator Salvation), there is a sense the actor is having some fun once again in his most recognizable role. 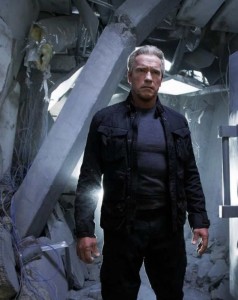 The prevailing feeling from the movie is of a charlatan production, with impostors in the key parts, everything a pretence of the authenticity established by a 31-year-old creation—pretty much the definition of fan fiction, whatever the intent. It might not be cynical, but that doesn’t keep it from feeling like a fake.

For anyone interested, Entertainment Weekly did a fairly comprehensive if spoiler-heavy in-depth look at the conundrums of time travel in the Terminator movies, including and especially Terminator Genisys. And IO9 interviewed the Genisys writers, which helped get a few other questions answered.