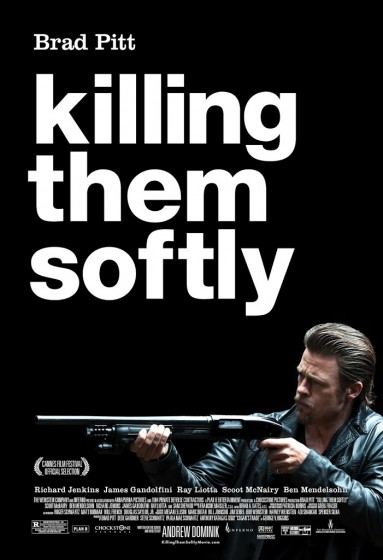 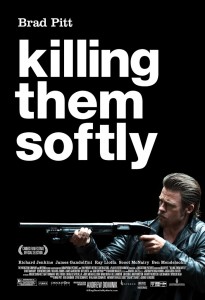 Killing Them Softly is a sour pill of a movie. Adapting Higgins’ 1974 crime novel and setting it during the financial crisis and presidential election of 2008, New Zealander Dominik—who wowed many, including myself, with his epic, languorous 2007 western The Assassination of Jesse James By The Coward Robert Ford—shoehorns political import into a noirish story of bad men cleaning up after themselves, after blood and mess. Are the troubles of a small group of sleazy underworld types somehow reflective of the dodges and power struggles of the people at the top? Are these machinations and murders just wall street blunders and controversial bailouts in microcosm? The ambition to tie these events together is impressive, but the dour, black-comedic tone combined with a cast of wholly unlikeable and desperate characters makes for a grim, unloveable experience.

Brad Pitt is a mob enforcer Jackie, the closest the film has to a cool protagonist, but even he’s a repressed, miserable dude in a crowd of them. He doesn’t like emotion, has no interest in offing a guy he knows personally—doesn’t like the inevitable crying and begging—a guy who enlisted two grimy thieves to hold up the wrong card game. But here’s the problem; everyone seems to know everyone else. As it happens, Jackie’s happy to end the life of the fellow who hosted the card game, Markie (played by Ray Liotta), basically because guys in the street think Markie’s responsible, even if he isn’t.

We spend a lot of time with the thieves (Ben Mendelshon and especially Scoot McNairy—having a great 2012 with solid work in this and Argo) who are as talky as Tarantino gangsters, but not nearly as stylish or funny. We spend a lot of time in big American cars, plenty of them land yachts from the 1970s, lending the film with their presence the patina of the greasy American crime dramas of that bygone era, like the adaptation of Higgins’ The Friends of Eddie Coyle. 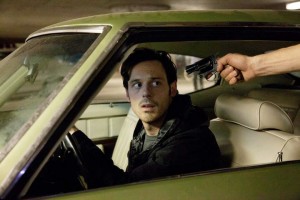 What Killing Them Softly doesn’t have is much of a hook, emotionally or otherwise, beyond its obvious techniques (ubiquitous radio news and TVs on CNN) connecting it with what’s happening in the larger culture of 2008. Like I said, I appreciate the effort of that, since most crime dramas are so insular. And I like the tone, the creative way with a camera in certain scenes—a character dies poetically in slo-mo, car windows shattering around him.

I just wish it all served a more involving tale. There’s little joy—or even just cold satisfaction—evident due to the absence of genre staples: a clever heist, a genuine action sequence, a femme fatale, an antihero you might care for, maybe even some kind of redemption (at a huge price, of course). You’ll find none of that here.

The heavy-handedness ends up being disappointing. It extends to a scene of the thieves shooting up soundtracked to the Velvet Underground; it’s all a little too on the nose.

And that’s a shame given the presence of the always watchable Brad Pitt. In a smaller role, Richard Jenkins is also good, as is James Gandolfini, who basically serves up a three-scene extended cameo. Though what’s the point of his character but to underline that hired killers, in and out of prison, are an emotionally damaged, alcoholic bunch? His self-piteous heavy is magnetic, but doesn’t do much for forwarding the drama.

Since Dominik is a serious talent, and has only directed two films in the past decade, I really wanted to like Killing Them Softly more than I did. But hoping doesn’t make it so.