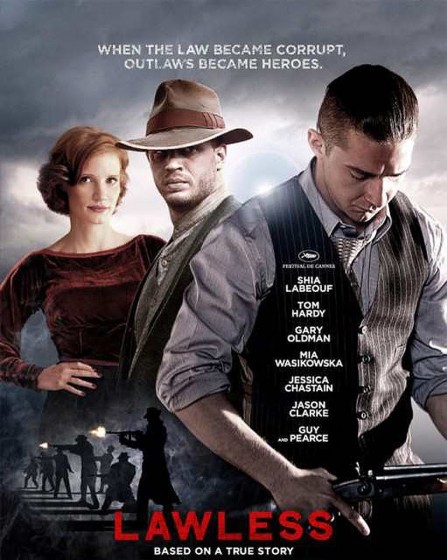 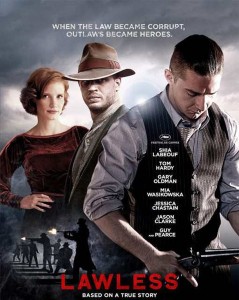 If you enjoyed the gritty Australian western The Proposition, also conjured by antipodean twosome Hillcoat and Cave, you’ll find a similar blood-splattered tonality here, their adaptation of Bondurant’s tale of his grandfather and two great-uncles’ exploits as moonshiners in rural Virginia in 1931.

Forrest (Tom Hardy, taciturn and grunty), Howard (Jason Clarke, thick), and Jack (Shia LeBeouf, all wet-eyed) are the Bondurant brothers, running bootleg whiskey all over Franklin County during the Prohibition. They’ve got no problems with their neighbours or the local law enforcement. Everyone enjoys their work. And when they run into trouble they can handle themselves. Well, at least the two elders can. All Jack’s good for is driving. But then law enforcer Special Agent Charlie Rakes (Guy Pearce, doing the fey and hissable villain thing) comes down from Chicago. He’s an evil piece of work. Meanwhile, the bar the brothers run, Blackwater Station, gets a new bartender also down from the city, Maggie (Jessica Chastain, luminescent), stirring interest in monosyllabic Forrest, while Jack tries to woo the local preacher’s daughter, Bertha (Mia Wasikowska, mostly coy), and show his brothers he’s worth something.

If this sounds to you like a western/gangster mash-up, that’s exactly what I’d call it. (I guess it’s an eastern, really, geographically speaking.) You have your bewhiskered brothers, like the Earps or the Jameses—take your pick. You’ve got the moonshining and machine guns, and a bad guy that’s almost a cartoon. And I haven’t even mentioned Gary Oldman’s cameo as Floyd Banner, a man with, as they said in Miller’s Crossing, “a talent with a Thompson.”

Hillcoat has a gift for authenticity, from the costume department to the dirt under the nails, while never forgetting he’s making a genre picture, even one that’s spliced from two genres. Cave has a way with grotesquery, which shouldn’t surprise anyone who knows him as a songwriter and performer. (And Cave works on the soundtrack too, which is outstanding.) Whether it’s having Forrest crush mens’ faces with his brass knuckles or the sight of a woman running, screaming through the woods, her clothes in tatters, he knows how to bring a creepy edge to the proceedings. There’s some exploration of myth versus truth, but most of that is window-dressing on one of the more violent pictures in recent memory—with some refreshing comedy in the coda.

And this is a hot cast. I’m not sure if Hardy qualifies as a star yet, his mug hidden for most of The Dark Knight Rises behind Bane’s mask, but he’s magnetic, as usual. There’s an argument to be made that Pearce goes too far OTT, his Rakes showing not much more than closeted resentment and venom. But sometimes it’s fun to have an antagonist without a fraction of redemption.

That leaves LeBoeuf, who is asked to carry most of the emotional stuff. He has some acting chops, and does sell the naivete, but his transformation from softie to avenger could have been more convincing. I never liked him much.

(You know who I do like, from his cohort? Emile Hirsch. But I digress.)

It’s September this weekend, folks. And this is the first movie of the fall season, the first in ages that resists being called a popcorn picture, despite having some scale and heaps of buttery entertainment. Enjoy it.