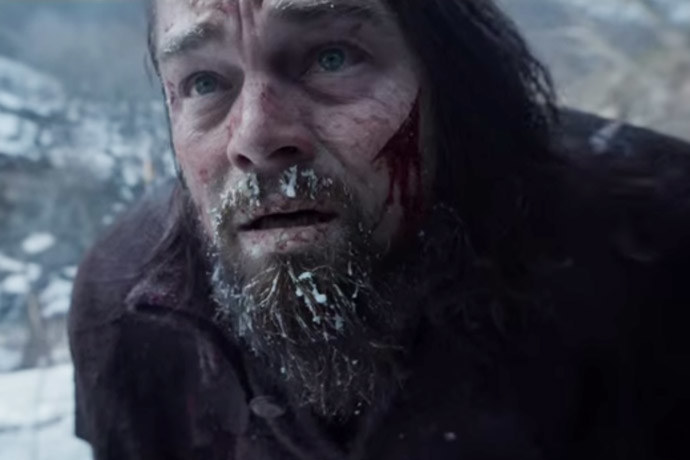 Directed by Alejandro G. Inarritu | Written by Inarritu and Mark L. Smith, from a book by Michael Punke | 156 min. | ▲▲▲△△ 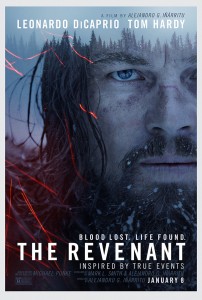 First off, I have to say: If I was reviewing solely the cinematography of Emmanuel Lubezki (Children of Men, To The Wonder, Gravity) the film might get my highest rating.

The camera movement inspires wonder—how does he do what he does? I suspect a judicious use of CGI, which is terrific with only a couple of exceptions—a scene where a herd of bisons is set upon by pack of wolves look a little dicey. A horse and rider going over a cliff, the camera following, is spectacularly done. An immersive attack scene at the film’s beginning, and the much-discussed tussle with a bear, are jaw-dropping highlights. We’re so close to it all exhalation fogs and blood splatters the camera lens.

But there’s more to talk about than just visual magic and spectacle. Inarritu, whose last film was the overrated Birdman, is reaching for the kind of operatic drama of men, brotherhood, and betrayal we’ve seen reached in work by Michaels Cimino and Mann. To his credit he gets close in scale, if not in emotion. 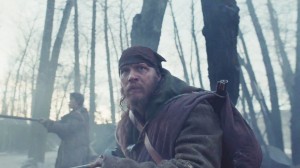 He tells a tale based in fact: Hugh Glass (a shaggy Leonardo DiCaprio) was an early 19th Century scout on the western frontier, where the Americans and French traded and/or fought with the First Nations people, living their manifest destiny.  We meet Glass as part of an expedition to collect pelts, led by Captain Andrew Henry (the increasingly ubiquitous Domhnall Gleeson). Also in the party is Fitzgerald (Tom Hardy), an embittered and frustrated trapper missing his scalp, increasingly at odds with everyone around him, including Glass. Glass is betrayed and left for dead, but despite being grievously injured finds a way to cross miles of frozen waste in an effort to enact his vengeance. All this while a party of Native Americans searches for a woman who was taken from them. These parallel quests will intersect.

Beyond that, apparently, it’s DiCaprio. 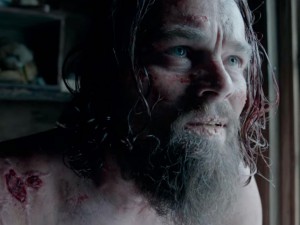 This is where Inarritu and his 18 credited producers have made a critical error. Sure, DiCaprio’s physical commitment to the character is impressive, mirroring the icy hell the crew went through—the production was notorious for shedding people unwilling to put up with Inarritu’s increasingly outrageous demands. But DiCaprio persevered, and he certainly looks uncomfortably cold and pained for the bulk of the overly extended running time, swimming in icy rivers and crawling through the mud with ice on his beard.

But his character is startlingly one-note. There’s little feeling of real emotional vulnerability. He rages, he suffers, but he neglects to actually earn our sympathy, and the script somehow fails to make us feel the injustice of his situation. He’s as icy as the landscape around him.

Meanwhile, the most magnetic, dangerous actor working in Hollywood today, twitchy Tom Hardy, blows DiCaprio off the screen in every scene they share. His Fitzgerald is a wildly complex dude, a desperate, god-fearing sociopath, savvy to  the challenges of nature and creatively managing his own ethically questionable decisions. The story of his father’s religious conversion with a squirrel (I shit you not) is the best bit of dialogue in the picture, powerfully absurd, yet delivered with total conviction by Hardy.

By the time this epic journey wraps up, a good 45 minutes later than it should have, the already anticlimactic conclusion is soured by the fact we’re cheering for the sneaky, snaky Fitzgerald to somehow get the upper hand. 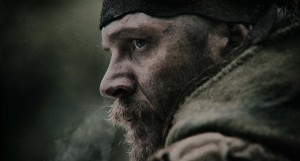 This is a problem.