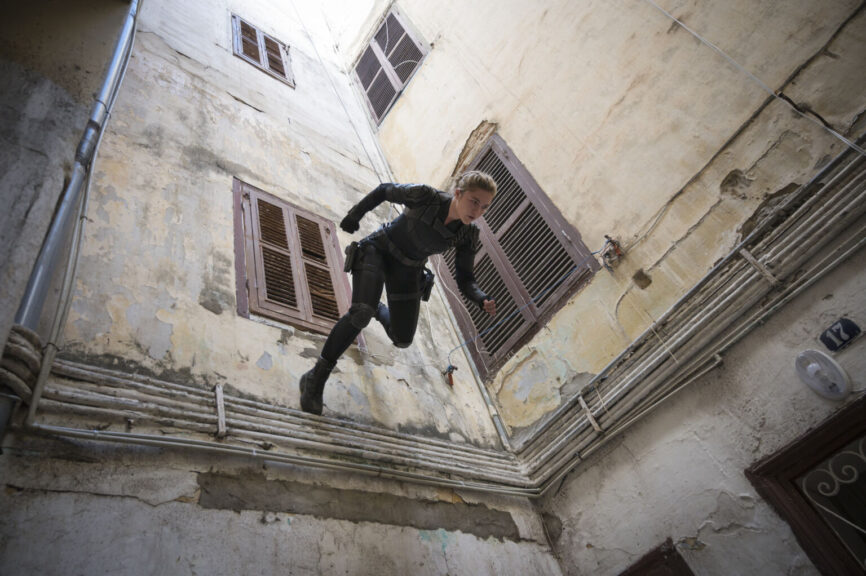 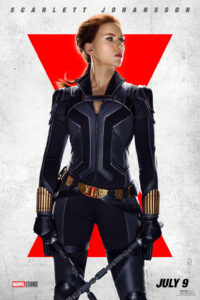 This is a movie that deserved to be up on the big screen way, way before now, and I’m not even talking about the pandemic postponement.

Natasha Romanoff (Scarlett Johansson) aka the Black Widow, Marvel’s Russian superspy-turned-superhero, deserved her own Marvel Cinematic Universe movie almost a decade ago. The prevailing wisdom at the time amongst Hollywood bean counters was that a female-led superhero movie was box office poison, which has been proven entirely wrong in the years since with Wonder Woman and Captain Marvel, .

Hoping to make amends for that obvious mistake, the masters of the MCU have finally provided this prequel, which gives Natasha a bit of a backstory, as well as a full scale adventure during the time she was off the map between Captain America: Civil War and Avengers: Infinity War.

What we get is a largely self-contained, mid-range MCU blockbuster. It’s not bad — it delivers the wall-to-wall action one has come to expect from a big, summer popcorn movie — but it’s not nearly as special as it could’ve been given the unrealized potential of its mysterious lead. What it takes a reasonable swing at, though, is a story about both the family you choose and the one you don’t. 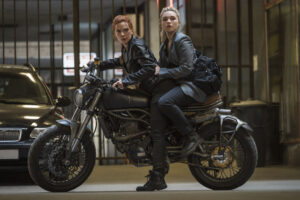 Before this, we knew Natasha Romanoff had been amongst the elite female assassins trained from a very young age at the mysterious Red Room somewhere in Russia, and that in the years before she was an Avenger, she killed a lot of people — many of them presumed innocent. It’s what she calls “the red in her ledger.”

When we first pick up with her here, she’s a tween in Ohio, 1995, part of a “family” of Russian sleeper agents — including a younger sister, Yelena, and parents Melina and Alexei (Rachel Weisz and David Harbour, both appropriately de-aged). Their three-year mission complete, they tear out of the midwest with American spy agency SHIELD hot on their trail. 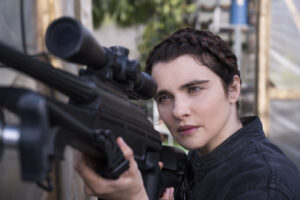 Cue one of the best credit sequences we’ve seen in one of these movies, which over a couple of minutes gives us a far better understanding of what Natasha survived in the Red Room, all to a mournful cover of “Smells Like Teen Spirit,” by Think Up Anger and Malia J.

The next hour or so runs like a greatest hits montage of James Bond 007 — Moonraker shows up on a TV screen — Mission: Impossible, and the Bourne franchise, which Weisz was also once part of.

It’s so breathless you’d be forgiven for not having a friggin’ clue what’s going on as we sprint from Norway to Morocco to Hungary. In the midst of a high-speed motorcycle chase, I found myself wondering who was chasing whom, and why. It’s done with efficiency, if not personality, but Marvel knows better than this by now: plot and character shouldn’t be a few words shouted over machine gun reports.

It’s when the movie reconnects its central four — a funhouse mirror version of TV’s long-running espionage drama, The Americans — that it gets more engaging. 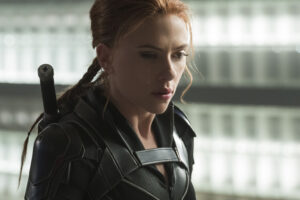 Reunited more than two decades later, our family of spies has a goofy, ersatz charm. As she’s shown in films like Lady Macbeth and Little Women, Florence Pugh is cinematic dynamite in the right ensemble, and as grown-up Yelena her caustic confidence blows up every scene she’s in.  Weisz is a Stepford Mom, weirdly robotic, while Harbour is a big, coarse clown as The Red Guardian, a Russian version of Captain America.

Their time together gives the movie its heart, and suggests its theme: This Marvel movie is actually about the legacy of human trafficking, about women and girls whose bodies are collateral, bought and sold by men, and how they free themselves from that trauma. Heavy stuff for a superhero picture. 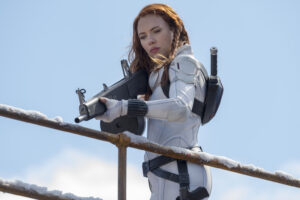 But, not as compelling as it might’ve been.

Black Widow doesn’t tell us much about Natasha Romanoff that we didn’t already know. Of all the Avengers, her backstory, her particular spy-chology, is the most fraught and the most ripe for exploration.

Yes, we learn about at least one former victim of her missions, but it’s not given much emotional weight. Imagine if this movie almost turned her into someone you don’t like, and imagine if that darkness she couldn’t really escape, no matter how hard she tried to fix things? It would help set up what her character chooses to do later in the franchise, a genuinely selfless act for someone she loves.

Instead, it’s almost as if the espionage elements here are at war with the superhero genre notes. We get an unnecessary subplot involving mind-control, which is a suspense killer. Without free will, there’s a whole lot less accountability.

I think it’s worth saying now, with 23 movies in the rearview and an entire cosmic story arc completed over 11 years, what makes an upper-echelon Marvel movie memorable — say a Captain America: Winter Soldier, a Black Panther, or an Avengers: Endgame —  has a lot to do with the antagonist. A terrific villain, one whose motivations are human and understandable, does a lot to help keep audiences invested in the heroes’ journey.

Ray Winstone shows up, barely hiding his patented cockney accent behind a Russian burr. He’s set up to be a Bond baddie in the mould of Hugo Drax or Karl Stromberg, but he doesn’t really get much of a chance to manifest. The Taskmaster, a fascinating heavy in the comics who mimics the moves of every hero he fights, is here a stiff amalgam of The Terminator and one of those old-time Toaster Cylons. This while Olga Kurylenko and O-T Fagbenl (from The Handmaid’s Tale) are welcome but wasted in support. 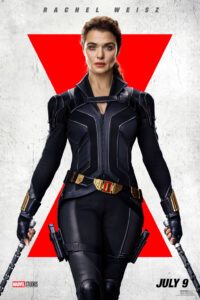 Amidst the massive action set-pieces and the implausible floating lairs, it is a genuine pleasure to see Scarlett Johansson pull on the wrist-shooters one more time in her own movie, even if it, like the rest of this sprawling franchise, never really gives her a proper chance to shine.