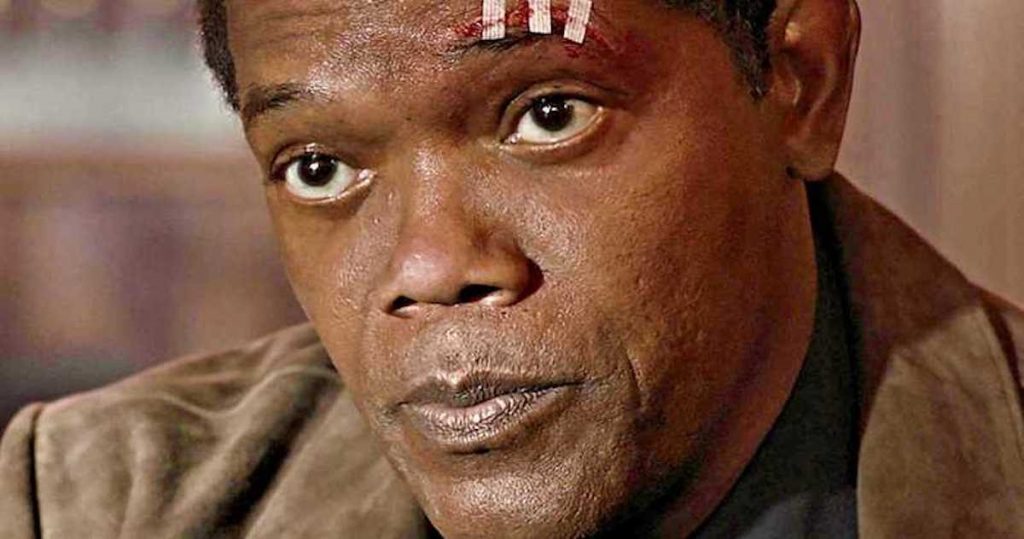 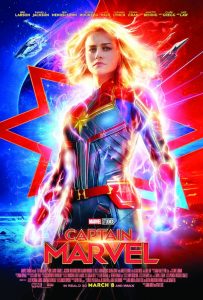 Well, it certainly took them long enough. I’m talking about a Marvel Studios superhero movie with a female lead. It should’ve been Black Widow, way back in the MCU second phase, around 2013. Now that they’ve chosen Captain Marvel, a powerful character from the comics with backstory allowing her one foot in Earth’s superhero community and one out in the broader cosmos, I can understand the appeal. But it’s 2019, and Marvel’s foot-dragging has been disappointing.

My recollection of the comic character Carol Danvers starts with Avengers Annual 10, the Michael Golden-illustrated, Chris Claremont-written, classic. Danvers, back then known as Ms Marvel, was trying to piece together a life having been brainwashed by an immortal being to live in an other-dimensional limbo. When she returned, she’s assaulted by the mutant Rogue, her memories and much of her power stolen from her. Just an average day in the life of one of the Avengers, but the story seemed to set up Carol Danvers as a character steeped in tragedy, someone who’d been victimized and mistreated, even by her friends. I know that more recently, she’s been rebooted in the comics, but the history is key.

Captain Marvel never threatens to get that deep, which is too bad, but it lays the groundwork for a better future. It’s hard to review these Marvel movies without treating them as an ongoing serial, but the best of them delivers a largely self-contained story, one with a satisfying beginning, middle, and end. Captain Marvel is a rough ride in places, but offers a passable intro to a promising character.

The film starts with a sour distinction: The opening 10 minutes is the worst-looking start to a Marvel movie I can remember. Directors Boden and Fleck aren’t known for much visual panache in their previous work, pictures such as Half-Nelson or Mississippi Grind, but this is just awful. The sequence involves a team of Kree warriors looking to rescue one of their agents on some distant planet, amongst them Vers (Brie Larson), a warrior-in-training with special gifts, proton blasts she shoots from her fists, and Yon-Rogg (Jude Law), her mentor. They arrive on a world that looks like a styrofoam set left over from Classic Trek, all smoke machines and ropey special effects. 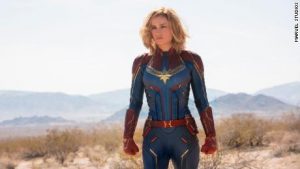 Things improve somewhat when it’s revealed Vers has suppressed memories. She keeps flashing back to Earth, her previous life there as a military pilot named Captain Carol Danvers. Before long, Vers has shown up on Earth: it’s 1995, and there she’s trying to track down a military scientist, Lawson (Annette Bening), who’s being hunted by Skrulls, the metamorphic enemies of the Kree, led by Talos (perennial bad guy, Ben Mendelsohn, who weirdly flips between his original Aussie and American accents). 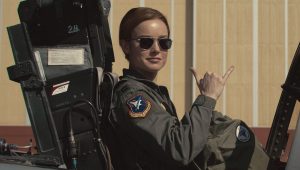 Plot-wise, all this is pretty thin gruel. Carol’s past life was rich—she was tight with another pilot, Maria (Lashana Lynch), and her daughter, Monica (Akira Akbar)—but we never get the sense she feels she’s missing much from that past, or that she feels any real schism between who she was and the Kree warrior she’s become. Bening is barely in it, and when she is she’s wasted, and Law isn’t given enough time to manifest his particular charm. You end up wishing he and Larson’s Vers had bit of a romance, if only to bring more emotion to bear. And the action sequences, overall, are unmemorable.

The opportunity to riff on 1990s culture is paid lip service, but not much more. Nice to hear a few grunge-era tunes on the soundtrack, and chuckle at an Alta Vista browser, but otherwise there’s not much joy to be had from our hero stomping through Los Angeles of 24 years ago, and the filmmakers would do well to remember expressions like “fierce” weren’t really in the cultural lexicon back then. 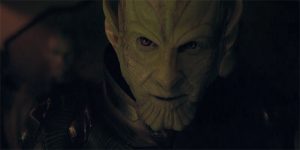 What does work is the chemistry between Larson and Samuel L. Jackson, here de-aged as Nick Fury. (Full marks to the CGI in this case, which is a lot less distracting than it’s been elsewhere in the Marvel Cinematic Universe.) They go on a bit of a road trip together (accompanied by a ginger cat named Goose, not the only nod to Top Gun), providing opportunities to riff off each other and making for a few of the film’s most satisfying moments.

A thematic subtext of how we treat refugees gives the picture a welcome relevance, even if it undercuts the possibilities for a future adaptation of Marvel’s Secret Invasion storyline—for those who know what that’s all about. As far as story elements that reflect a more feminist perspective, Vers/Danvers gets told repeatedly that she’s too emotional, but there’s little evidence of that getting her into any real trouble, or being an obstacle she needs to overcome. Then again, it’s male characters who insist her disposition is a problem, and they’re clearly mistaken. 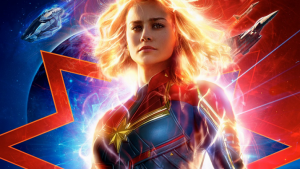 The best part of this middling Marvel picture, and what makes it worth seeing, is Larson. The physicality she brings to the role is a lot of fun. It’s in her posture; her back straight, chin high, elbows slightly bent, and eyes narrowed, all enough to suggest that she’s having fun with her role as a noble warrior hero, and has a good idea of what they’re supposed to look like.