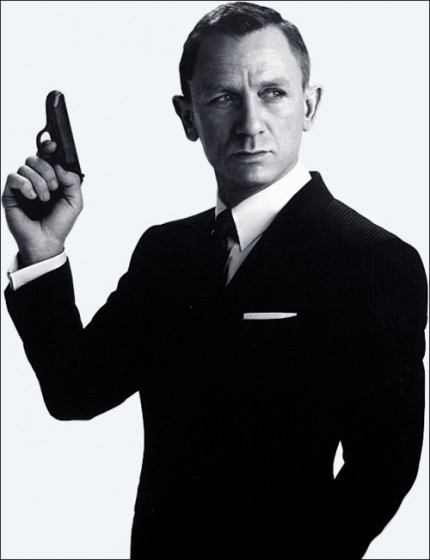 Daniel Craig arrived with a flourish typical of a new Bond, a press conference on the banks of the Thames. The actor had proclaimed his tough guy credentials in a crime drama called Layer Cake, and looked comfortable with props (like guns) in Munich, but seemed far from a shoo-in for the role of James Bond. For one, he’s blonde. And what about all those other actors who were considered? For years, since probably Croupier, I thought they should give it to Clive Owen. How the man looks in the tux is very important, after all.

When Casino Royale finally arrived, the world was a very different place. Not just that four years had passed since the last Bond. Not just that it was a post-9/11 world in a way that would need to be reflected in a spy movie with any grounding in realism. The biggest change since Die Another Day was the arrival of The Bourne Identity and its sequel, The Bourne Supermacy. The Matt Damon thrillers had not only brought the spy genre into the 21st Century with a cold intensity, they had changed the very language of action movies. Paul Greengrass’ signature style in the second film especially, and Damon’s meaty physicality, meant this new Bond movie would have to be very good to not feel outpaced, a relic of another time.

Good thing, then, that it is very good. One of the best. Helmed by Martin Campbell, who also introduced Pierce Brosnan as Bond in Goldeneye, written by Neal Purvis, Robert Wade and Paul Haggis, Casino Royale brings Bond back to his beginnings. He’s only just qualified for his 007 status, his license to kill, with a messy, brutal, fight in a bathroom, shot in high-contrast, gritty black and white and intercut with a Prague office showdown, Bond ending the life of a thieving government agent, also in B&W.

Then we have a gorgeous credit sequence, with the maligned Chris Cornell song “You Know My Name” playing, a track I think is a perfect, adrenalized rocker with percussive opening that recalls John Barry’s many Bond themes. We waste no time; the first act is launched by an astonishing, parkour-based action sequence with amazing crane jumping like nothing we’ve seen in Bond before. Within minutes, not only does Craig perform startling physical feats, establishing his bona fides as a believable action man, we have a sequence as much fun as anything in the Bourne movies. And Bond ruthlessly kills his unarmed quarry.

M is Judi Dench, a carryover from the Brosnan films, maybe a bit tougher on the “blunt instrument” that is this new, more thuggish, cockier Bond. (No Miss Moneypenny or Q, yet.) We have Bond in a bathing suit, upending the Honey Ryder/Jinx imagery, perhaps hoping to appeal to Bond’s female fans, or cultivating a new gay audience? It’s hard to imagine Bond as a gay icon, but who knows what EON has planned going forward. Maybe Bond’s been over-compensating for something all these years…

He wins a classic Aston Martin in a game of chance in Barbados, drives it for about a minute. Chasing bad guys, he travels to Miami, and then to Montenegro, to play a high-stakes poker game (Baccarat is way too 20th Century) against Le Chiffre (the super-creepy Mads Mikkelsen), hoping to bankrupt this international terrorist organization. The purse strings for the crown are held by Vesper Lynd (Eva Green, astonishing, and very much Bond’s equal). Craig is everything he needs to be: grim, athletic, and maybe the best actor to yet essay Bond. He shows the complex layers of the man, a boyish impudence along with a relentless determination to do the job required, fearlessness. When there are quips, they’re cold and lacerating, not jokey. Casino Royale is closest in tone to From Russia With Love, On Her Majesty’s Secret Service and For Your Eyes Only. Good company.

The romance with Vesper is electric, as is the finale, where we finally are given a psychological reason for Bond’s distrust of women. This is a much more emotional character, while still being very recognizably 007. There are unexpected action sequences, brutal violence, and a new Aston Martin, too (though it sadly bites the dust). And the famous Monte Norman theme? It finally appears in the final sequence, as does the famous line: “Bond, James Bond.”

All in all, it’s a keeper. Were I to recommend a Bond movie to a neophyte, this is the one. This 22nd Bond disappointed me when I saw it in the cinema. A second viewing on DVD revealed more pleasures than I’d originally noticed. It’s actually not a bad entry in the 007 canon, it’s just a somewhat more slight relative to the one just before, which was so impressive.

Directed by Marc Forster, written by Paul Haggis and Neal Purvis, this is the first immediate sequel in the history of the franchise. I’m not sure that was the best choice. Fine to keep Mr White (Jesper Christensen) and the mysterious Quantum organization in the picture, a la SPECTRE, but to continue it almost immediately following the end of Casino Royale feels a bit rushed from the get-go. Odd that, if the opening sequence—a solid car chase along the Italian coastline—takes place not long after the conclusion of Casino Royale, that Bond seems to be wearing a different suit.

Turns out the bad guy this time out is a man, Dominic Greene (Mathieu Amalric), who wants to take control of the water supply of Bolivia, so stages a coup with the help of Mr White’s Quantum. I suppose as far as megalomaniacal plans go it has a certain style, but he has no real henchman, and isn’t much of a physical threat to Bond. He’s slippery, but a villain as diminutive as he is should have muscle, too.

We do have the return of Rene Mathis (Giancarlo Giannini), the friend-or-foe contact from Casino Royale who brings a bit of old-world flavour, as well as my favourite Felix Leiter yet, Jeffery Wright, who suffers in his position working for the CIA, given the agency’s role in covert American foreign policy. He and Bond share one of the best written scenes in the movie, crystallizing both their personal friendship and their nations’ interests. “Bond Girls” include Olga Kurylenko as Camille, a woman looking for revenge on Greene and his military compatriots for past atrocities, and Strawberry Fields (only called Fields in the film, but the end credits give up the ginger’s double-entendre handle), a British agent played by Gemma Arterton.

The conclusion at a strangely explosive hotel in the desert isn’t one of the series’ best. Neither is a sequence where Bond and Camille escape a crashing plane. However, Bond slipping out of MI:6’s grasp at the hotel in La Paz to pursue Greene is a great moment. The location cinematography is typically excellent, as is the different fonts for each international city, and the action sequences don’t disappoint. I just wish it felt like there was a little more at stake beyond the water rights of Bolivia.

Whatever its problems, what really resonates from Quantum of Solace is Craig: he proves that Casino Royale was no fluke, he is Bond right to the bone. And we all get some satisfaction at the end with the Vesper Lynd affair tied off for good.

So concludes my last “Bond at 50” post, looking back at many, many hours of entertaining spy movies. For my consideration of the 22 (23 including the non-EON Never Say Never Again. The first version of Casino Royale remains unseen by me, but I gather I’m not missing much) before Skyfall, you can go here: The Sean Connery Era, On Her Majesty’s Secret Service, The Roger Moore Era, The Timothy Dalton Era and The Pierce Brosnan Era.