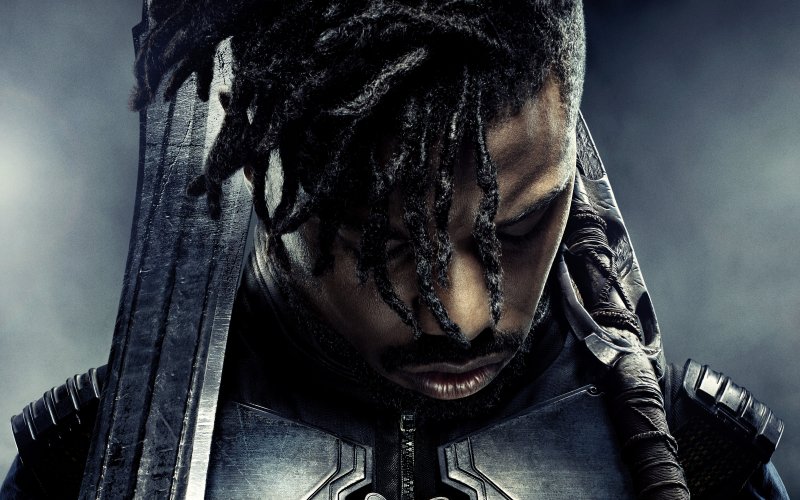 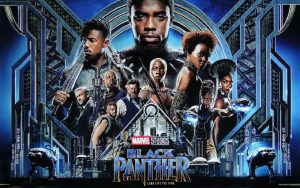 The Stan Lee/Jack Kirby-created Marvel comic character gets his own movie following his introduction in Captain America: Civil War. T’Challa (Chadwick Boseman), the Black Panther, is the king of the fictional African nation of Wakanda. The country presents as impoverished but is, in fact, a technological marvel, powered by the extraterrestrial element Vibranium. It’s as fantastic a vision as Asgard in the Thor films, and in some ways Black Panther most resembles the first two Norse myth adaptations in its tale of fathers and sons, the betrayal by family members, and the terrible responsibility of power. What distinguishes this, of course, is the setting and a cast almost entirely black. 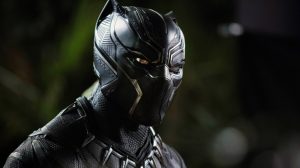 It’s hard to overstate the thrill of a Marvel superhero movie that creates a mythology around a group of African heroes, men and women. I was utterly lifted by it, so what this will do for young people of colour who have not often seen images of themselves in these kinds of movies I can only imagine. The stunning popularity of the film at the box office is testament to the film being embraced across the board, and deservedly so. 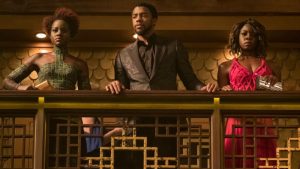 Of the characters and plot, I’ll say this much about the very good:

Having only recently ascended to the throne following the death of his father, Tchalla is aided a trinity of powerful women, starting with his little sister, Shuri (Letitia Wright), who serves as a Q to his Bond, developing new ways to use the Vibranium, from weapons to healing tinctures—this really is magical stuff. Nakia (Lupita Nyong’o), is T’Challa’s ex, recently returned to Wakanda from her work overseas as a spy. And Okoye (Danai Gurira), is a general in the King’s personal guard of spear-wielding warrior women. All are seriously badass and three of the best reasons to see the film.

Despite lots of success keeping Wakanda’s hyper-tech reality a secret from the world, Vibranium is getting out. South African arms dealer Ulysses Claue (Andy Serkis, hamming it up pretty good) has his hands on a sample he helped liberate from a British museum—a location that will be familiar to anyone who saw where they kept Hannibal Lecktor in Manhunter, The High Museum of Art in Atlanta. The planned sale of that Vibranium in Busan, South Korea, T’Challa heads there to stop. The deal goes down at a clone of the Macao casino set from Skyfall, pushing the 007 comparisons. 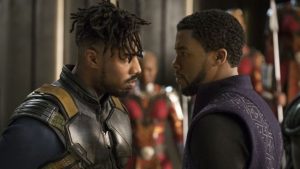 But there’s more going on here than protecting state secrets, and that’s to do with a decision T’Challa’s father made years before, a secret revealed shortly after T’Challa takes the throne. From this hidden past emerges the highly trained American war vet, Killmonger (the wildly charismatic Michael B. Jordan), who has his own reasonable claim to the Wakandan throne.

The production design, sets, costumes, and props are a big part of the overall success of the picture. There are pleasant places to rest the eye in every corner of the frame, from ceremonial garb to high end EMP devices to armour-clad rhinos. For the most part the film avoids any kind of noble savage romanticizing—though Coogler is American and can’t help but present a western perspective, I gather there was a lot of prep and research done in Africa to synthesize cultural elements for this impressive, aspirational world he and his collaborators have created. 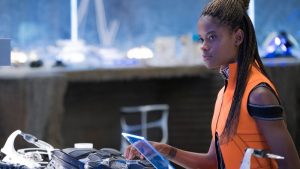 One of the more provocative ideas is that the ostensible villain of the piece, Killmonger, wants to take Wakandan technology and use it to help liberate black people across the globe. The suggestion that colonial western nations, like the United States, where blacks have never had a fair shake, could start again with a clean slate thanks to advanced Wakandan weaponry, is an interesting one. Partly thanks to Jordan’s on-screen presence, and partly to the decision to make him a vengeance-fuelled revolutionary with genuine, thoughtful motivations, Killmonger is the best Marvel antagonist to come down the pike since Loki. 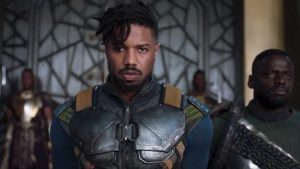 But not everything works so well. A too-heavy hand in CGI slathering turns whole scenes into animated goop, rendering too much of the action sub-standard with blah video game aesthetics. A virtual piloting system is used to drive a car remotely continents away and to pilot an aircraft remotely in a dogfight—it’s pretty cool, but it does tend to deny suspense when the pilots are basically practicing drone warfare. Do we care as much for Tony Stark when he’s not in the suit?

The overuse of computer imagery isn’t new for Marvel movies, but given Coogler’s superb handling of hand-to-hand combat in Creed, including that virtuoso uninterrupted shot through a boxing match, I was hoping for similar genius here and didn’t get it.  And, unfortunately, Martin Freeman returns as the American CIA agent with a seriously dodgy American accent. He’s the sole member of the ensemble who feels miscast. 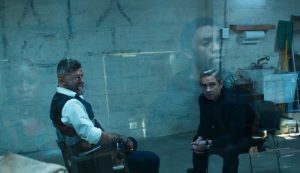 I also wondered why such an advanced civilization would still have leadership determined by ritual exhibitions of physical combat, which allow a strongman like Killmonger a way to power. I suppose the film is making a point that some traditions need to be left behind—isolationism and patriarchal tribalism—and in the new world those overt displays of masculinity are no longer needed. 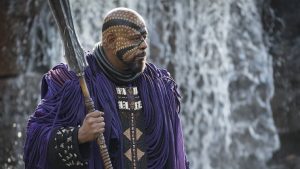 Also notable among the Wakandans are Angela Bassett as Ramonda, the Queen Mother, Forest Whitaker as Zuri, a trusted advisor, and Daniel Kaluuya as W’Kabi, leader of one of the associated tribes. Though they’re all here only in support, the film benefits no end from their built-in gravitas.