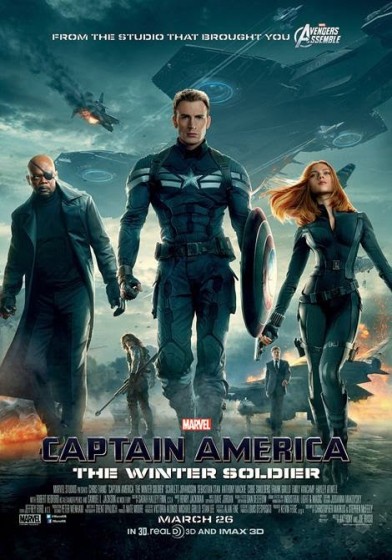 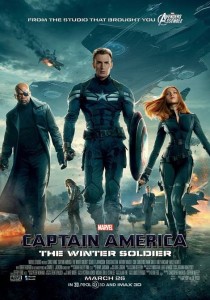 Been really looking forward to this, the ninth superhero movie in Marvel’s current world-dominating series—one Hulk, three Iron Mans, two Thors, two Captain Americas and an Avengers, for those keeping track—and I found many of my entertainment needs met. With these massive blockbusters the Marvel Studio bigwigs are managing to provide consistent progress of character development, slam-bang action and enough tonal variety so the movies never feel like a remake of the last.

(Maybe they could cut the falling/jumping out of airplanes trope just a little. Can you count how many times we’ve seen someone do that in one of these movies?)

Steve Rogers (Chris Evans) is a famous guy: Captain America is the hero who was frozen in time—literally, he was encased under ice—at the end of World War II and revived in a new world. People love his “Greatest Generation” pedigree—he even has his own exhibit in the Smithsonian—and that he comes from a simpler time with simpler values. But now, working for SHIELD, the transnational spy agency, he sees the compromises that must be made in this new world. He argues with his boss, Nick Fury (Samuel L. Jackson), who argues with his boss, Alexander Pierce (Robert Redford). But Cap will still take orders, leading a squad of hardcore SHIELD agents to retake a ship from mercenaries, even when he realizes one of his team—the Black Widow (Scarlett Johansson)—has other mission priorities.

It isn’t long before Cap sniffs out something rotten in SHIELD—an effort to provide sky-high security to the people of the world, which would, of course, undermine our freedom. We can’t have that. And it gets worse: this plan is actually a preemptive effort to kill a lot of potentially shit-disturbing folks, identified with a sinister computer algorithm. Definitely can’t have that. On the run with the Widow and a new buddy, Sam “The Falcon” Wilson (Anthony Mackie), Cap uses his keen intuitive nature (?) to suss out this plan, pulling on threads that go back to the Nazi-founded organization called Hydra, and a mysterious assassin called The Winter Soldier (Sebastian Stan).

(Not so mysterious to anyone who’s read the comics in the past decade. As someone who has, it’s a thrill to see this tale adapted for film.)

The directors have said the film is inspired by 1970s paranoid dramas, and while I can see that—especially in the casting coup of Robert Redford, and the not-accidental location of the SHIELD headquarters right across the river from the Watergate hotel—the connection is subtle. Yes, there are elements here of political thrillers, but really, Captain America: The Winter Soldier has more in common with recent James Bond in tone and pacing than in those ’70s pictures, which had horror and suspense in their DNA, not the balls-to-the-wall action we get here. Even at a healthy 136 minutes, this movie is in a hurry to get where its going, with precious few interstitial scenes to help build the lead characters’ jeopardy—beyond what having enormous cannons pointed at their heads can do. Besides, I doubt most audiences looking to enjoy a 2014 superhero epic would have the kind of patience those movies required.

But that’s not to say I don’t appreciate the effort Marvel is making to accentuate spy game intrigue. It distinguishes this Cap from the one that went before, and The Avengers, for that matter. I really liked seeing our star-spangled hero on the receiving end of the SHIELD weapons cache, forced to turn his own shield into more of an offensive weapon. Having the Black Widow to watch his back is a great touch, too. I think Johansson is doing sterling work in these films, playing a character with lots of shades of grey and more than a touch of the femme fatale, a nice contrast with Evans’ straight-arrow-but-nobody’s-fool hero. She also kicks serious ass and needs no rescuing, which is refreshing for the guy-heavy cape genre.

Solid casting in Emily VanCamp as Sharon aka SHIELD Agent 13, and the addition of The Falcon, is sure to please the True Believers, though I did wish we learned more about how Sam made his startlingly effective rocket-pack/wingsuit. And where was Jeremy Renner’s Hawkeye when all of this was going down? I figured we’d at least get a cameo from the archer, given his established connection with The Widow.

If I have a gripe here, and it’s a small one, is that there are times when I was too aware this movie is not self-contained. It’s a fine balance, to evoke the satisfying continuity of a series and still provide something that feels like it stands on its own. Towards the end of CA:TWS, I don’t think we quite got enough resolution for some characters, just a moody montage to Marvin Gaye’s “Trouble Man” (though it’s an excellent choice for montage music).

I suppose all this just means I’ll be first in line to see Avengers: Age of Ultron in 2015.

So, go enjoy Marvel Studios #9 edition already. The summer blockbuster season starts today. I, for one, am pumped.