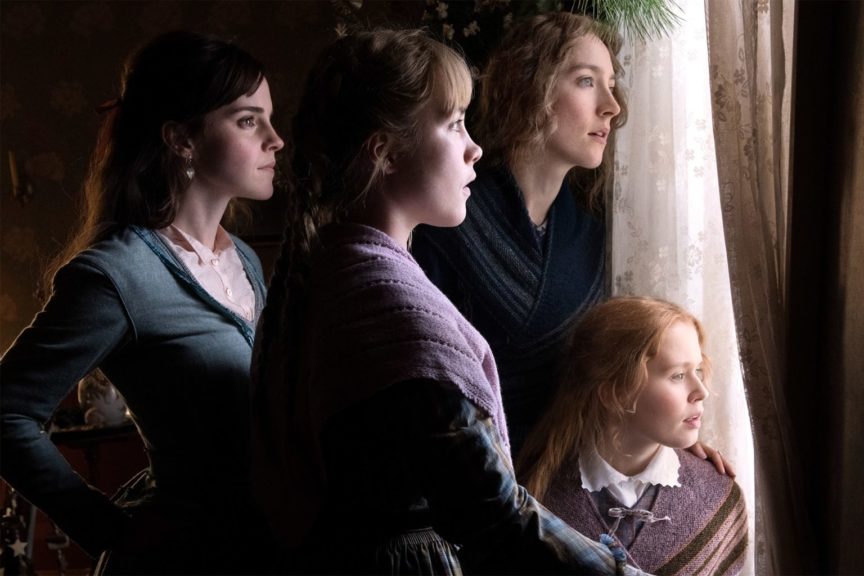 Written and Directed by Greta Gerwig, based on the novel by Louisa May Alcott | 135 min | Netflix 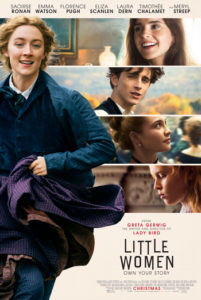 Having seen four earlier versions adapting this material in the past week—though not having read the book—I came to this newest edition feeling like I know this story pretty well, but hoping Gerwig could present it in a fresh way. I’m impressed at her accomplishment—not a perfect film, but a strong and modern vision of this stalwart of American lit, proving it has plenty of things to say to audiences more than 150 years since the book’s publication. 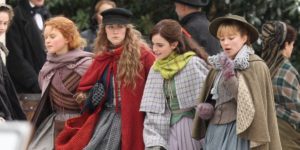 For those few who may not know, it’s the story of the four March sisters in Concord, Massachusetts, during and following the American Civil War. Their father (a late arriving Bob Odenkirk) is away in the fight, so the girls are being raised by their mother (Laura Dern). Our lead is Jo (Saoirse Ronan), the extroverted writer, with the youngest, Amy (Florence Pugh), the prissy painter, afforded a welcome larger portion of the story than in previous versions.

The eldest sister is Meg (Emma Watson), here espousing more traditional values, but then finds her husband (James Norton) and the lack of resources he provides a challenge when she wants some of the things her fancy society friends enjoy. Beth (Eliza Scanlen) is the fragile, sickly one, who loves dolls and the piano. If the story has a weak link, it’s her. Gerwig doesn’t seem nearly as interested in her character other than how her illness impacts the lives of those around her, and Scanlen struggles to hold a candle to the star power of Lady Bird, Lady Macbeth, and Hermione Granger.

Fortunately, Gerwig has a firm grasp on everything else. She structures the narrative in a non-linear fashion, starting it with Jo already in New York City as she presents her work to a magazine editor (Tracy Letts). Then we flash back to years earlier in Concord, the depravations of war, the introduction of the wealthy neighbour, Laurie (Timothée Chalamet), his kindly grandfather (Chris Cooper), and the imperious Aunt March (Meryl Streep), all swaddled in an appropriately string-laden Alexandre Deplat score. 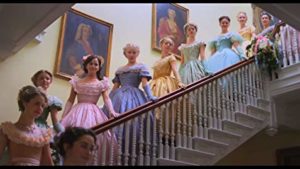 We then visit with Amy in Paris as she studies painting and considers the attention of a wealthy suitor, and crosses paths with the heartbroken Laurie. The regular shifts in time and place is a genius move—it forces the audience to piece together the characters and the sisters’ life events like a dramatic puzzle. It’s a brave and creative way to interpret this material, and immediately distinguishes it from any of the versions that went before.

Chalamet is a great choice for Laurie, the first take on this character that allows him to seem genuinely appealing, but with also many more shades of grey—a scene where he reproaches Meg for her behaviour reveals he’s far from the milquetoast boy of previous interpretations, for better or worse. 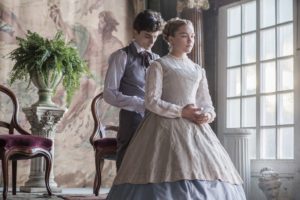 What Gerwig does by fracturing the timeline is deprioritize the Jo/Laurie romantic spine that occupied so much screen time in previous iterations of Little Women. This picture isn’t nearly as concerned with whether Jo will marry—Professor Bhaer, her love interest, does appear early on essayed by Louis Garrel, but he’s peripheral—it’s more about the sisters’ drive to make their dreams come true, and what that will require of them in a world where their options are so limited. Amy gives a great speech about why marriage is a tactical consideration when a woman has no way to make a living, and Jo rages against the perception that women’s sole concern is for matters of the heart. The film wears its politics on its sleeve to almost a fault—Gerwig has chosen to mine modern relevance in this text to the point where some conversations are difficult to imagine having ever taken place between people in 1865. 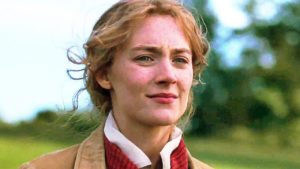 In her conclusion, she channels Richard Curtis with a kiss in the rain, and then frames it all in a deeply meta way—having her cake and eating it, too. She’s addressing what we now know about Alcott, who remained unmarried in her real life, who didn’t want Jo to be married, either, but when the first volume of her book was published, she bowed to the pressure of her audience and editor to deliver romance and nuptials in the second. Gerwig knows we all still want the romantic ending, and her solution is impressively clever, to dovetail the author with the fiction. That said, she’s not free of romantic whimsy: she has Jo completing her book by candlelight in one, long marathon, a painful cliche about writers that easily could’ve been cut.

Nevertheless, Gerwig’s ease and confidence with reframing the material has brought a delightful, perhaps definitive new version of Little Women into the world, which is an achievement worth celebrating. In Saoirse Ronan’s performance we have the best Jo since Katherine Hepburn, while Florence Pugh is the best, most robustly imagined Amy yet.