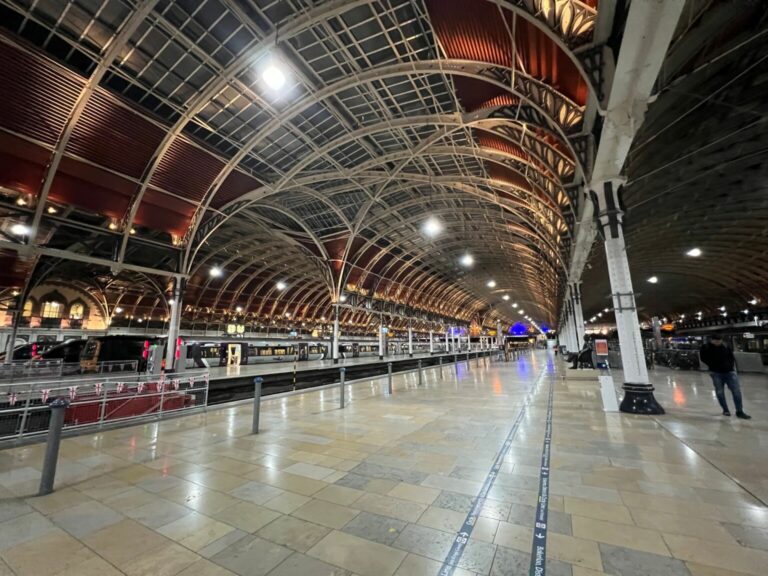 In May I spent almost three weeks in London, one of my favourite cities in the world. 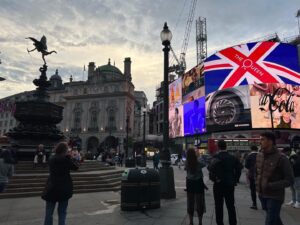 I first visited when I was a kid, and then lived there as a teenager, finishing high school at an American international school. London turned me into a genuine film lover, the cinemas of the West End offering regular screenings of new Hollywood and British films. The city also introduced me to the concept of a repertory cinema — watching older movies late at night at independent picture houses like The Scala in Kings Cross. I so enjoy going back as often as I can.

Reacquainting myself with the city over a healthy number of days was a real pleasure, especially through the lens of film. What follows are my cinema-related holiday snaps. (Click on the images to expand.)

Let’s start with the Prince Charles Cinema just off Leicester Square, the heart of the West End. The Prince Charles is an independent movie house that offers a terrific selection of international, mainstream, and left-of-centre film. (For more information, visit the cinema website.) 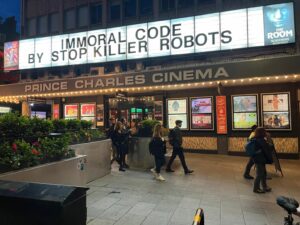 If I was a Londoner I’d be getting a membership and going to see movies there once a week, at least. On a previous visit I attended a screening there of The Grifters, with a Q&A after the screening with the great Stephen Frears, the film’s director.

This time I saw 2001: A Space Odyssey in 70 mm. Here’s what was playing just a couple weeks back: 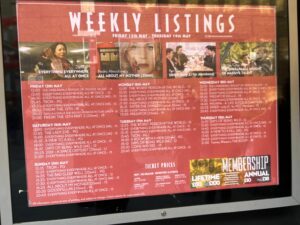 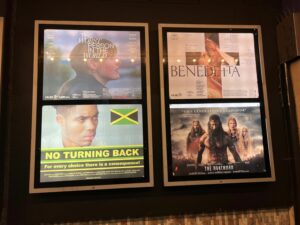 One of the evenings I was in Leicester Square I narrowly missed the Royal Premiere of Top Gun: Maverick, attended by the Duke and Duchess of Cambridge as well as its star Tom Cruise. All that remained was the event detritus, temporary barriers and hoarding. 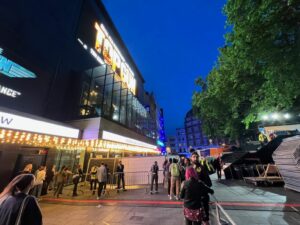 I was surprised how many celebrities I did see on this visit. Near where I was staying on Great Portland Street, my friend and I passed a tall, thin man with long curly hair wearing a baseball cap and a tracksuit. It was Matt Smith. Couldn’t mistake that chin. 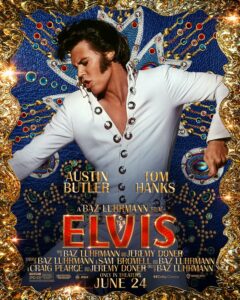 I happened upon Jodie Comer taking a little time to sign autographs for fans outside the Harold Pinter Theatre where her one-woman show Prima Facie was playing — it’ll be an Event Screening at Park Lane in Halifax in July for those interested in catching it.

And just strolling one evening I spotted Indira Varma, star of Game of Thrones, Luther, and more recently, Obi-Wan Kenobi on Disney +.

The West End is celeb central! 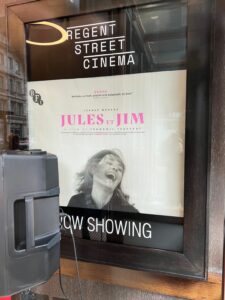 I ended up seeing Top Gun: Maverick at the Regent Street Cinema. At that location in 1898 the Lumiere brothers’ cinematographe machine was demonstrated to the press and public. It was converted into a full time cinema in the 1920s until 1980, when it shut down. In 2015 it was renovated and reopened. It screens 16mm film, 35 mm film, and 4k digital.

I also went to see a film (this one) at the Everyman Cinema in Kings Cross. Everyman is a boutique chain of classy art house cinemas all around London. Tickets to that screening were £19 (almost $30 Canadian) and I got table service inside the cinema for alcohol, warm food, or dessert. That’s a pricey night out, but the couch seating sure was comfortable. 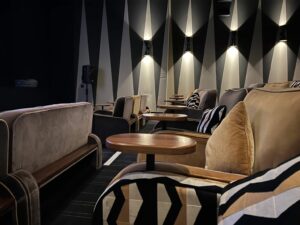 On a previous visit to London I went to the Everyman in Islington to see Edgar Wright introduce a screening of Shaun of the Dead. It had a bar right in the cinema. Ah, civilization.

Speaking of Mr Wright, on this visit I strolled by one of the key locations from his Last Night In Soho at Goodge Place. Interestingly, it’s not in Soho — it’s a few blocks north in Fitzrovia. Still, a plausible location for a student apartment, especially in the 1960s. 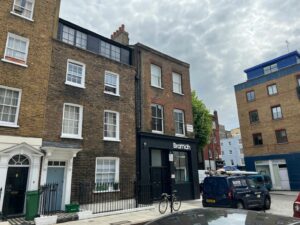 You can’t go anywhere in central London without stumbling on a location from one movie or other. For example, walking between Leicester Square and The Embankment I recognized the corner of Great Scotland Yard and Northumberland Avenue. This is where Tilda Swinton’s Ancient One fought Mads Mikkelsen’s Kaecilius and his followers up the side of a building, turning it inside out with her eldritch abilities, in Doctor Strange. 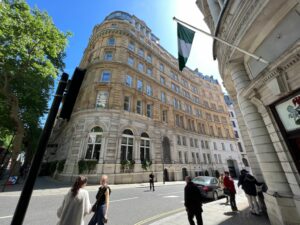 Up in Camden Town I was reminded of another MCU movie, The Eternals, when I saw this landmark: 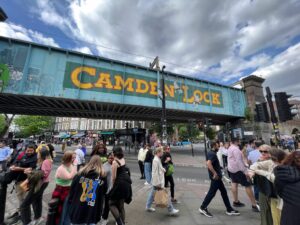 And here’s that clip!

And just off the Charing Cross Road I found this delightful park, quite hidden from the bustle of the city— London has so many green spaces stashed behind gates and brick walls. This is the Phoenix Park, where Henry Golding and Emilia Clarke’s characters met in Last Christmas. 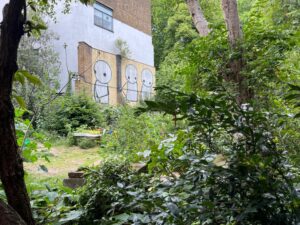 A visit to the Victoria and Albert Museum meant a trip to South Kensington, where many of the exteriors of the horror classic, Repulsion, were shot. 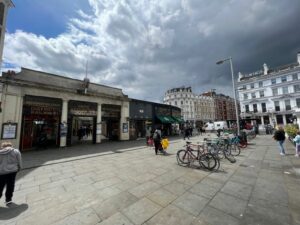 The V&A was hosting an exhibition on men’s fashion through the ages, and included a photo of Michael Caine looking dapper… 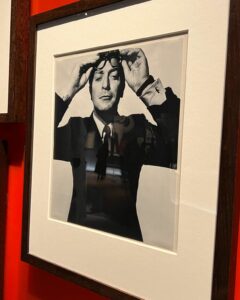 …as well as a suit once worn by Marlene Dietrich in the film, Morocco (1930). Here are the details… and the suit itself. 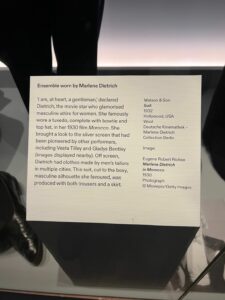 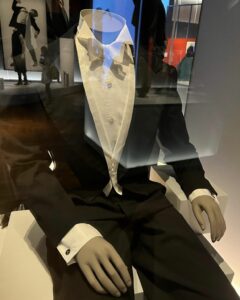 The British Film Institute was showing films by director Mike Hodges, including Croupier, Flash Gordon, and Get Carter, but I couldn’t make it work to attend any of the screenings, unfortunately. This is as close as I got to the theatre on the Southbank. 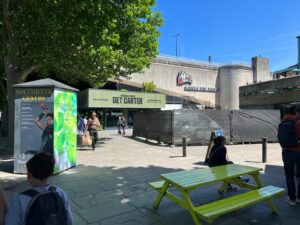 London offers up strange things on the regular, some that are hard to explain. Like this Toy Story-inspired artwork spotted through a gallery window in Covent Garden. 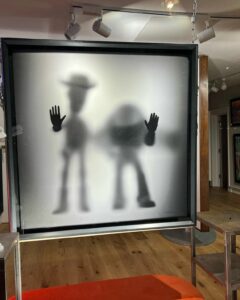 I have no idea what this is about, but when I saw it I was like, oh, poor old Nick Nolte. 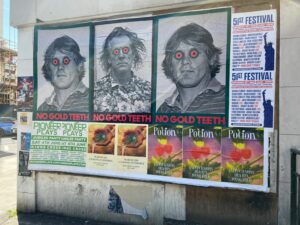 The city’s best known comic store, Forbidden Planet, had this item in its window display. The price was way out of my budget, but I have to admit as a Tron fan I was tempted by the packaging. In my teenage years I played the Tron video game in London arcades. It all comes full circle — like a disc of Tron! 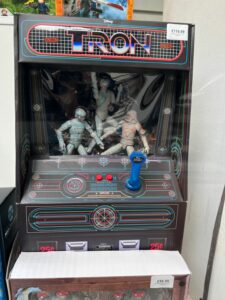 Finally, I paused at a location of one of my favourite films, Withnail & I, not far from Camden. Best I can tell, this is the bench in Regent’s Park where Richard E Grant and Paul McGann sat and bemoaned their fates. 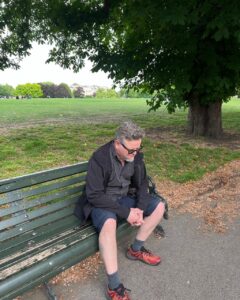 A great line in a film full of them: “Jesus, look at that. Aside from a raw potato, that’s the only solid to have passed my lips in the last 60 hours. I *must* be Ill.”