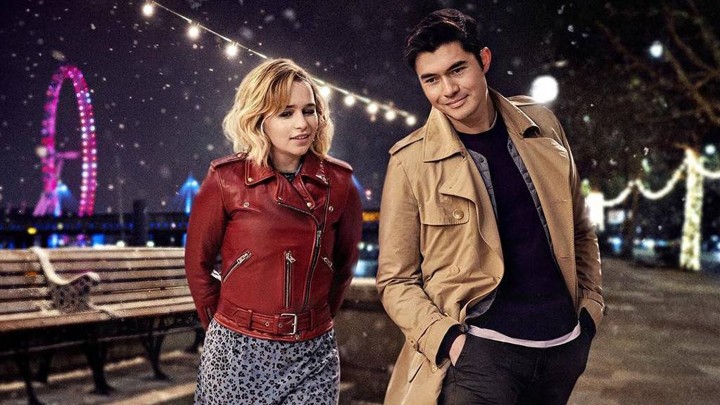 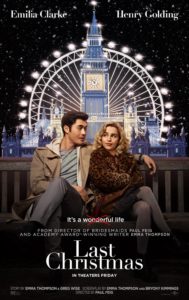 I try not to blame a movie for the mistakes of its marketing, but have you seen the trailers for Last Christmas?

They sell it as a sweet romantic comedy set in London at Christmas, starring Emilia Clarke as Kate, a party girl who’s still recovering from a cardiac-related health crisis, who meets a mysterious, handsome stranger, Tom, played by Henry Golding of Crazy Rich Asians fame. What’s heavily suggested is, let’s say, a magic realist twist. The film is named after the song by George Michael—whose music is well-featured throughout—with an opening line that goes something like, “Last Christmas I gave you my heart, and the very next day you gave it away.”

I won’t confirm if the marketing has spoiled a plot convolution, but I will say that much of the movie is a pleasant surprise, a genuine Christmas treat in November. And that’s saying something coming from me, a confirmed Grinch when things seasonal show up before December 1st. 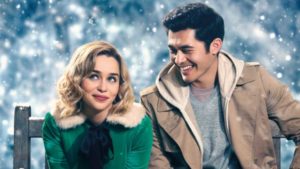 What it gets right starts with the script by Bryony Kimmings and Emma Thompson, who came up with the story alongside her husband, actor Greg Wise. They follow the three romcom rules written by Richard Curtis, back when he was the king of these kinds of movies—like The Tall Guy, which Thompson starred in: 1) Make the supporting cast at least as interesting as the leads,  2) Make sure there’s a laugh somewhere in every conversation, and 3) Provide enough dramatic real-world relevance for the laughs to feel earned—four weddings, sure, but there’s also a funeral.

If anything, Last Christmas tries to do too much, an ambition genuinely refreshing in a frequently formula-bound genre.

Kate is a mess. If she can make a bad decision, she does — alienating her friends, barely holding onto her job in a Covent Garden Christmas store (working for “Santa,” played a very game Michelle Yeoh), and on the verge of homelessness at the holidays in London, a beautiful city — Feig’s cinematographer John Schwartzman never misses a chance to emphasize its sparkling beauty — that’s also unforgiving to the less fortunate.

When Kate meets Tom, she rapidly discovers he’s together in every way she’s falling apart. He rides around town on his bike, eschewing his cell phone and volunteering at a homeless shelter, encouraging Kate to pay attention to the beauty and life around her. She’s struggling with her identity following the trauma of that life-threatening health crisis and difficult family dynamics—Kate’s got an overachieving sister (Lydia Leonard) with whom she has a relationship very like Phoebe Waller-Bridge’s Fleabag and her sibling in the Amazon Prime show.

(Speaking of superior TV, I knew this movie was working when we get a flash of the classic Blackadder Christmas Special, co-written by Richard Curtis, and I didn’t flinch.) 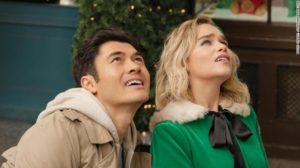 Kate’s parents emigrated from the former Yugoslavia. which gives the picture an opportunity to include some anti-Brexit sentiment — all well-enough handled — but this is where Thompson makes the mistake of casting herself as Kate’s broadly accented mother. There’s an unfortunate tradition of caricatures of foreigners in British comedy, and while I don’t doubt Thompson’s intentions to provide a well-rounded character, she doesn’t quite escape cartoonish stereotype. It’s the kind of role Julie Walters or Miriam Margolyes have made a career out of, and accordingly might have been better suited for — or maybe even an actor actually from Eastern Europe. 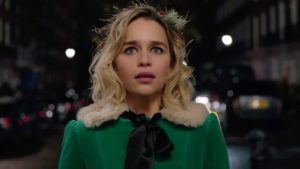 What really works, and what’s most essential for a movie like this to work, is the chemistry between the leads, which they have in spades. Golding has already established himself as a charming leading man, but Clarke is a revelation. Sure, she’s impressed in fantasy drama like Game of Thrones, Solo: A Star Wars Story, and Terminator: Genisys, but this is the first time we’ve seen her as an ordinary person — a girl, standing in front of an audience, asking us to love her — and she crushes it.

She can also really hold a tune. Hopefully there’ll be more charming romcoms and songs in her future. And fewer dragons, maybe.