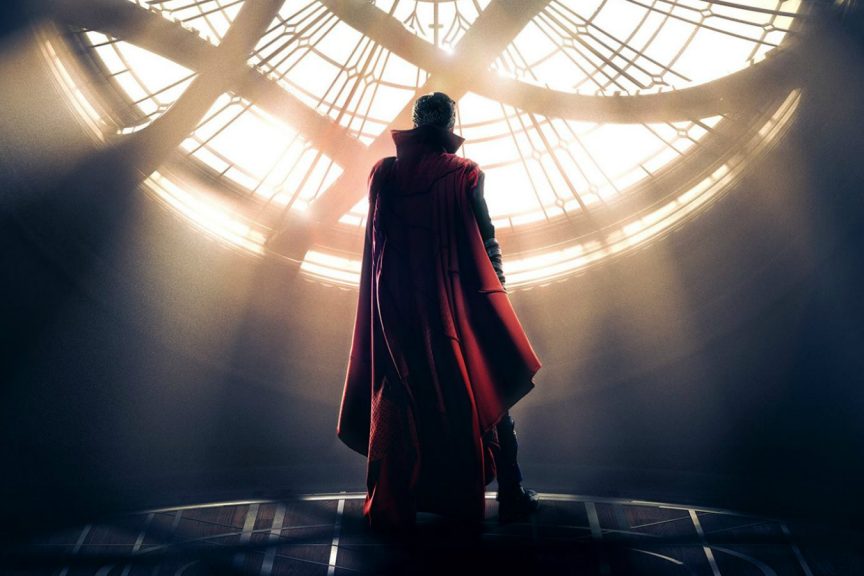 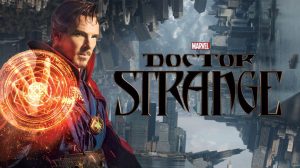 For those not raised on Marvel Comics, Dr Stephen Strange is the fantasy universe’s resident Master of Mystic Arts, its top wizard. His comics were the place where super-heroics crossed over into the inter-dimensional weird of psychedelia, a trippy vision inspired by the ’60s counter-culture.

Story-wise, there’s not much in the movie version nearly as freaky. Stephen Strange (Benedict Cumberbatch) is a cocky New York neurosurgeon still carrying a flame for his ex (Rachel McAdams, who barely manifests). One night he totals his Lamborghini and damages his hands in the wreck. Cue a heroic journey of self-discovery and redemption.

Plot points are lifted in whole cloth from Christopher Nolan’s Batman Begins, and Marvel’s own Iron Man, with Strange’s interest in ’70s AM radio hits by bands like Earth, Wind, and Fire a texture cribbed from Guardians of the Galaxy. This cannibalization isn’t a good sign.

Strange’s efforts to heal himself take him to Kathmandu, where he seeks the help of The Ancient One (Tilda Swinton), Mordo (Chiwetel Ejiofor), and Wong (Benedict Wong), a group of wizards busy protecting the world from mystic baddies, including Kaecilius (Mads Mikkelsen) and his zealots, who seek immortality via a pact with a force of unspeakable evil. Naturally. 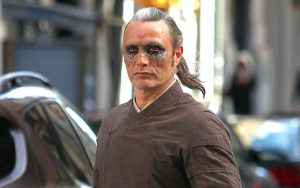 Assembling a cast this potent means every scene has someone in it that cooks, even as the actors are probably chuckling to themselves as soon as the director calls cut, with lines like, “I’ve learned to tap into powers I never even knew existed.” But a light touch and a little humour goes a long way to ground the fantasy, and Cumberbatch is right in the pocket playing a witty, cerebral and arrogant man who still manages to charm everyone around him. Even with the American accent, it’s not a big leap from Sherlock Holmes, and his natural charisma carries much of the film.

The problem with Doctor Strange goes beyond over-familiar elements in the character or the tone. The script, after a decent set-up in the first act, loses its way through a frequently boring midsection. Strange’s journey to enlightenment is badly bungled—not only do we have no sense of how long his training takes, his character arc flatlines in a second act of suspense-free action sequences. We get not one, but two visits back to his hospital in New York in quick succession. The middle 30 minutes is stuffed with narrative padding. I guess I should’ve learned by now: you can’t have too many scenes of people talking in a superhero movie before someone gets punched. 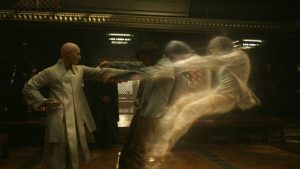 Another question I found myself asking in the midst of a story about the occult and demonic forces: Why isn’t any of it scary? A few genuinely creepy tropes would’ve gone a way to distinguishing this from other Marvel material. I also appreciated the diversity in the cast, but the film still plays in cliches of eastern mysticism that feel like it’s a little too indebted to campy tropes of Hollywood past than anything approaching authenticity. “You cannot beat a river into submission.” Ugh.

But maybe I’m expecting too much. What I did enjoy, most of all, was what many of these movies do so well: fantasy spectacle.

But even those, in places, feel derivative. As impressive as the movie’s special effects are depicting all the supernatural energies and MC Escher-esque mirror-universe world-twisting, they are so deeply indebted to The Matrix, Inception and a number of James Bond opening credit sequences, the Wachowskis, Nolan, and the Broccolis could mount a copyright infringement case. But, the building creativity in those visuals eventually save the day in the last act.

A finale crossing over from Hong Kong to a Dark Dimension of Ultimate Evil is genuinely something we haven’t seen before—an action sequence staged while time reverses. Strange traps his foes in zippering walls while explosions implode. His inevitable tussle with the Big Bad is also clever and unexpected, and he gets a little help from a non-human element—his cloak of levitation—that gives the picture a welcome touch of Mary Poppins. 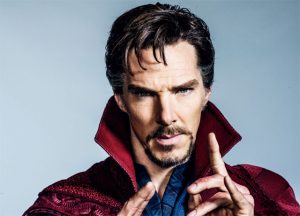 Though this introduction to Stephen Strange is some distance from magical,  Marvel does succeed in placing the mesmerizing Cumberbatch among their stable of heroes as the resident Sorcerer Supreme. That will certainly benefit them, and us, in the future, hopefully with some added mojo in the scripts.