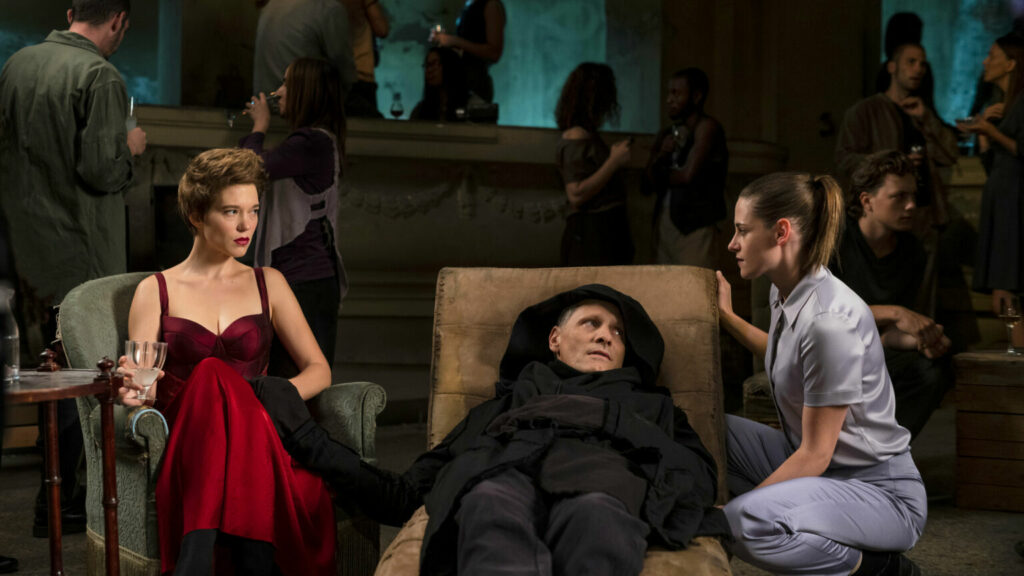 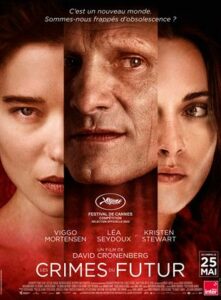 Can we say now, while he’s still with us and making movies at this standard, that David Cronenberg is the greatest filmmaker our national cinema has ever produced?

I mean, the mountain of evidence is towering. If you go back more than 50 years he was making student films in Toronto — including one with the same name as this new one, but otherwise quite unlike it — that were far ahead of their time even then.

In the intervening years we’ve seen his astonishing work, from Scanners to The Fly, from The Dead Zone to Dead Ringers, from A History of Violence to Eastern Promises. 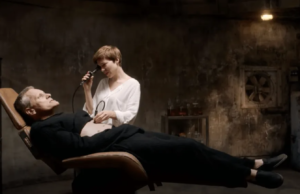 With his new feature he returns to his career’s central thematic obsession — our relationship to our body, both its vulnerabilities and its needs — with a vengeance.

Sure, you can talk about his influences in a new crop of storytellers — like Julia Ducournau’s Titane or even his son, Brandon Cronenberg, with his stunning Possessor — but there’s nothing like the original taste, is there? And that’s what the master is offering here. A hit of the pure stuff. An adult dose. 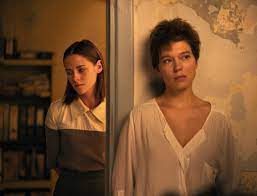 After a sizeable break from feature filmmaking — Cronenberg’s Cosmopolis was interesting, his Hollywood satire Maps To The Stars less so — it’s a peculiar and persistent pleasure to play witness to his body horror obsessions once again.

On board for a fourth Cronenberg collaboration is Viggo Mortensen at his most vampiric. He’s playing Saul Tenser, a celebrity performance artist living, if you could call it that, in a desiccated future — all shot in and around the rougher corners of Athens, Greece.

In this time people have been so over-stimulated they’ve lost the ability to feel pain, and pain’s absence has led to a preponderance of meatball street surgery. The environment we’ve destroyed is taking its revenge on humanity by giving us all a rampant, mutant neurofibromatosis — vestigial organs grow in and sometimes on our bodies. Witness modern dance by a performer whose eyes and lips are sewn up on the stage, his body covered in ears.

Tenser, one of the few who still physically suffers, he pair with performance partner, Caprice (Léa Seydoux), who surgically removes any of his new organs using deeply Cronenbergian biomechanical devices. Anyone who’s seen the scabby, tumescent creations of Videodrome, Naked Lunch, or eXistenZ will have a sense of what I’m talking about, while performative mutilation of one’s body shouldn’t be unfamiliar to most of us, right? 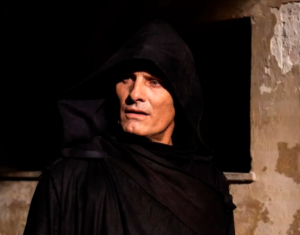 This could easily be one of the bleakest films in Cronenberg’s catalogue — it’s a film that starts with a boy smothered to death by his mother. As grim as that is, and broadly it’s a tale of our doomed society somehow adapting to its own poison, it turns out to be one of Cronenberg’s funniest. He seems much more invested in the ironic possibilities of his dystopic vision this time out. It’s a joy to see him take swipes at high art collectives, pointless bureaucracies, and the slippery concept of “inner beauty.”

“Surgery is the New Sex,” claims Timlin (Kristen Stewart), who along with Wippet (Don McKellar), runs a hush-hush new National Organ Registry. Gotta keep track of these changes — the implication being that anything inhuman’s unwelcome and needs to be controlled and suppressed. Bring on Dotrice (Scott Speedman) as the dead boy’s father whose mission is to be sure his son’s death wasn’t in vain.

The politics of these biological changes are addressed directly, but in the least thriller-y way possible. People meet and discuss the implications of human mutation and adaptation — Tanaya Beatty, Nadia Litz, and Welket Bungué all play characters who have important roles in the conspiracy — but Cronenberg’s not interested in suspense. He lets his narrative ease out languidly while never being dull. 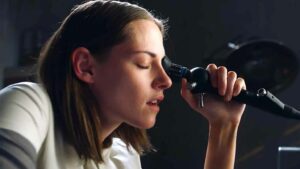 The relationship between Saul Tenser and Caprice is at its centre, but special recognition to Kristen Stewart who takes a big bite out of the movie with her smaller role, juicily enunciating every line. She says she dreams of Tenser slicing into her flesh while trembling with lust at the thought. It’s like the actor’s channeling every fangirl who ever approached her for a selfie.

The idea that we need to embrace our ugliness and self-destructive tendencies as a part of our evolution isn’t one I expected from the film, but I love it. I love the arch view of lives lived in decadent depravity, desperate to feel something real. I had moments of deep discomfort watching Crimes of the Future along with a wonderful and comforting sense of familiarity, and in the film’s final moments, maybe even a fleeting sense of hope. 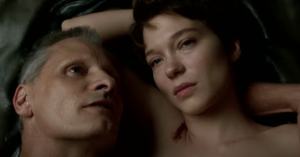 After more than 20 years of films, many of which that could’ve even been described as tasteful — the first three Mortensen collaborations, for instance — Cronenberg is once again grappling with the most fundamental questions of human nature, rooted in our visceral selves. At 79 his ideas are no less frighteningly pertinent than they were at 29. That’s also something to feel hopeful about, and to celebrate.