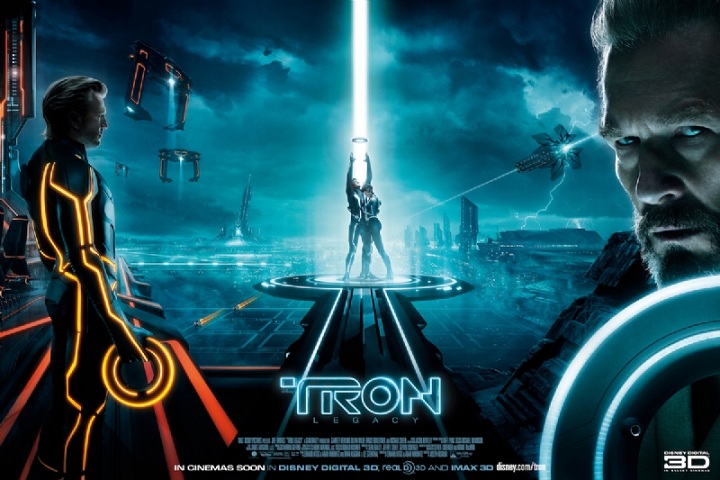 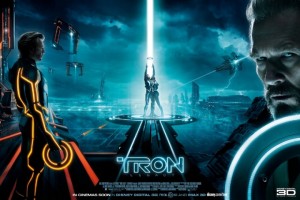 The mountain of hype around Tron: Legacy has reminded all of us, if we didn’t already remember, that there was a Disney science fiction picture in 1982 called Tron. Though it wasn’t a huge box office hit, it has been “incredibly influential” in the 28 years since. Really? Have we seen a lot of movies set inside a computer? OK, I’m being disingenuous: the influence has been seen in the field of industrial visual effects. No Tron = no Pixar, they say. And Tron can be rightly included in the cyberpunk movement championed in print by William Gibson, Bruce Sterling and Neil Stephenson, a genre of fantasy that imagined worlds inside the computer and people interfacing biologically with machines.

But so can The Lawnmower Man. Neither of these films are remembered for their daring leaps in storytelling or even being the equal to the work of those science fiction authors. Blade Runner is the cinematic companion to those folks’ work.  And the advance buzz on Tron: Legacy in the plot department wasn’t hugely promising. So I was surprised to find I how much fun I was having in the cinema.

This is an actual sequel. You probably won’t feel as though you’re missing anything for having not watched Tron, but it will give you more of a thrill if you have. I liked the action set pieces in the first Tron, but I felt that the initial set-up, about a guy who is absorbed inside a computer and has to deal with the existential questions of being The Maker down amongst his creations, was let down by the third act, a very Star Wars-indebted adventure of good against evil, with the pacing uneven and the outcome never really in doubt.

Tron: Legacy picks up in 1989, with a rubber-faced version of de-aged Jeff Bridges as Kevin Flynn telling a bedtime story about the computer world to his young son, Sam. Anyone who’s seen the trailer for Tron: Legacy knows that Bridges plays two roles in the film, Flynn at his actual age and a computer construct who is still in his 30s, as he would have been in the 1980s. However, while the computer generated version of young Flynn, CLU, is plausible in the machine where he’s recognizably a program, in the flashback he’s actually supposed to be human and younger, and it doesn’t work at all. It just looks weird.

Fortunately, it’s not long before we flash-forward 21 years and Sam (Garrett Hedlund) is in his late 20s. Encom, his father’s massively successful video game company, is still a big player, but Sam, who retains controlling interest, has a somewhat combative relationship with the board of directors and its wunderkind young programmer—portrayed by an uncredited Cillian Murphy—the son of Ed Dillinger, played by the inimitable David Warner in the original film.

A stunt early on pays homage to a set-piece in The Dark Knight, a feeling reinforced by the chilly, Nolanesque nightime city cinematography and Murphy’s presence. Encom continues to grow unchecked, and founder Kevin Flynn has been missing since that rainy bedtime story night in ’89, with Sam left wondering whatever happened to his dear dad. But we all know what happened, don’t we? Flynn went back to the machine and somehow got stuck there. It’s only a matter of time before Sam gets sucked in, too, and is reunited with his father to fight against the fascist villainy of his father’s greatest creation, the program CLU.

There’s a lot of good stuff here. There’s the upgraded computer grid with advanced gaming, both the discs and the light cycles, which are sure to impress the more nerdy in the audience (like me). The structure of the new film mirrors the old. Sam busts out of the game grid very much the way his father did in the previous film, though the world beyond the grid is a lot less well-defined than it was the last time. Those who saw Tron will remember the adorable little entity Bit, and the escapee program Ram. There are far fewer supporting characters in this one, cute or otherwise. But the look of the place and the sound design is amazing.

Eventually Sam does spend time with his father, but where Kevin Flynn was this lively, rogish character in the original Tron, here he’s a dispirited aging hippie, hanging around with a bright and beautiful program called Quorra (Olivia Wilde).

The aspects of the story that play on the typical Michael Crichton tropes of humans being dominated by their creations is implicit throughout. That also rings in tune with the Terminator films and in the Tron: Legacy soundtrack, in which Daft Punk has incorporated percussion reminiscent of Brad Fiedel’s Terminator score. The less-than-subtle references to the Holocaust with CLU having committed genocide on a community of self-aware “isomorphic algorithms” certainly brings a more complex weight to the story beyond the fairly simple good versus evil structure. The guilt of Kevin Flynn, to see the world he created become so perverse and self-destructive, must be huge.

It’s a shame that these elements aren’t more fleshed out. Or the self-aware AI organisms, the algorithms, don’t quite resonate the way, say, Rachel did in Blade Runner, another movie that is a powerful antecedent to this picture—Tron: Legacy even has a final scene that fans of the original cut of Blade Runner will note seems very familiar.

But, yes. There are elements here that I really enjoyed, recognizing that in the final analysis, this is a Disney production, and a certain simplicity in the story is bound to be part of the deal. The world created is one I liked spending time in though, granted, it’s probably because the world is such a loving recreation of other science fiction environments I’ve visited. There’s even a tip of the hat to the final few scenes of 2001: A Space Odyssey in the look of the elder Flynn’s apartment.

But I couldn’t entirely ignore the film’s big problems behind the fun. Where Tron made an effort to explain how the world inside the computer operated, this film lets a lot be taken for granted. Such as, why would programs need a flashy disco bar to hang around in? Or why would programs watch the gladiatorial game grid? Wasn’t the implication in the first film that programs fought each other for the amusement of The Users in Flynn’s Arcade? And wouldn’t the growth of the internet have had a profound effect on this world, make it seem much, much larger, instead of what it actually appears now, a whole lot smaller? And where’d all the suspense go? In the end, the final battle is, well, just a bit dull. And how come the transferrence between the actual world and the grid, such a trip in the first film, is glossed over here?

And lastly, though far from leastly, the first movie was actually named for a heroic program called Tron, whose job it was to police the system and stand up for programming justice, or something. Played by Bruce Boxleitner, who cameos here, he was the Luke Skywalker of the thing, where Bridges was much more the Han Solo. Tron does have a presence here, but he’s been corrupted. Yet we hardly see his face in this one, and for a movie that carries his name, you think he’d be a much bigger part of the plot. But no. This is a huge missed opportunity, and the chance for this movie to be a bit more akin to The Empire Strikes Back. But maybe there’s already enough of a Star Wars template in this programme.

I suppose, if this does big business, a sequel will likely come down the pike in a few years and maybe more will be explained then. As it stands, the dazzle, sound and added touch of nostalgia combine to make Tron: Legacy worth seeing, despite the many shortcomings. With expectations set to medium, you should be OK.

Oh, and one other thing: I saw Tron: Legacy in a 3D Cinema. The slight visual thrill of 3D did not outweigh the frustrating discomfort of the enormous glasses, the lower light of the 3D version making the shadows look a lot muddier, the headache behind the eyes that manifested before the end of the film, nor the added expense of the ticket. I’ll say it here: to real fans of cinema, 3D is all hype, and an irritant. Don’t encourage its proliferation by wasting your money on 3D movies when 2D is available.