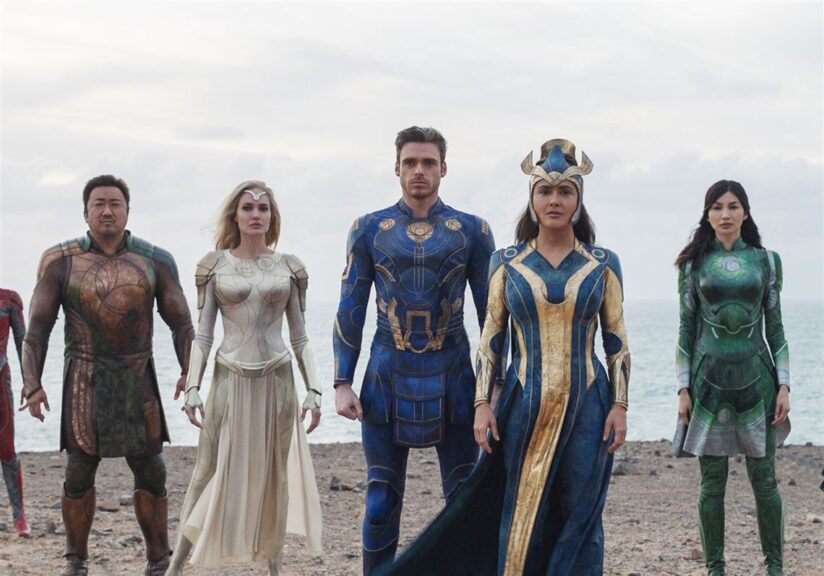 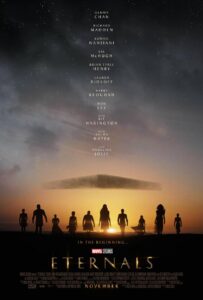 Lemme be upfront with my connection with this material: I’ve read comics since I was a kid and I made mine Marvel, but I tended to steer clear of the cosmic tomes like the ones created by Eternals grand master, Jack Kirby.

I know the Eternals appeared in Marvel comics after Kirby already made a series featuring cosmic beings for DC, The New Gods. What’s always bothered me about the characters is they actually seemed more like your run-of-the-mill DC heroes. They have the vast, godlike abilities, a separate society of cosmic beings, some with powers suspiciously like Superman, Wonder Woman, and The Flash. It made them harder to relate to compared to Marvel’s more down-to-earth characters with more approachable problems. In cinematic terms, this feels like something Zack Snyder would contemplate.

Marvel Studios have brought to the screen this collection of super-beings in a collaboration with Oscar-winning director Chloé Zhao, whose humanistic aesthetic couldn’t be further from Kirby’s otherworldly, almost psychedelic vibe or Snyder’s teeth-gritting intensity.

Eternals starts slow, with too much exposition, but it gets better as it goes along. It’s a vast mythology with intriguing elements and an appealing cast, and I have to admire that they’ve swung for the fences here, shaking off some of the formula tropes that built the MCU empire and have gone a little stale over 25 movies. But, taken as a whole, Eternals stumbles more than it soars.

Eternals are immortal super-powered protectors of the planet who have been amongst us for thousands of years. They were sent to earth by the Celestials, a race of gigantic aliens, to eliminate predatory baddies, the Deviants, who look a lot like the beasties from Edge of Tomorrow. The multiethnic Eternals, having completed their mission 500 years ago, now live normal lives around the world, hiding their immortality until one is killed in the present day, suggesting the Deviants have returned. We get more evidence of that during a set-piece in Camden Town, London, when a Deviant emerges out of the Regent’s Canal. 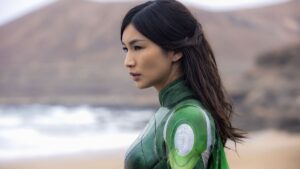 The centre of the group is Sersi (Gemma Chan). She has matter manipulation powers, I think — her abilities are described as being able to turn rocks into other things. She’s romantically interested in human man Dane Whitman (Kit Harrington), who doesn’t know she’s an alien immortal. Her ex is Ikaris (Richard Madden), the Eternal who flies around and shoots lasers out of his eyes. Plenty of love triangle potential here, though it’s not really capitalized on as Dane disappears for most of the movie. (I was down with them making more of the Game of Thrones reunion, for anyone who cares.) 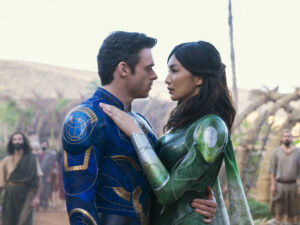 Ajak (Salma Hayek) is the Eternals leader and a healer. Thena (Angelina Jolie) is a warrior apparently out of Greek myth, but she’s got a cosmic version of Alzheimer’s so the big-fisted Gilgamesh (Ma Dong-seok aka Don Lee) has to look out for her. Sprite (Lia McHugh) is an illusionist and is younger than her comrades though nobody knows why —  the movie doesn’t care, so neither do we. (Speaking of things the movie doesn’t care about, in flashbacks that go back thousands of years, characters already speak in American, British, Irish, and Mexican-accented English. Best not to think about that too much.)

Kingo (Kumail Nanjiani) is a Bollywood star who shoots energy out of his fingertips and has a personal valet, Karun (Harish Patel), who films everything he does. Makkari (Lauren Ridloff) is speedy, Phastos (Brian Tyree Henry) is the techno-wizard, and Druig (Barry Keoghan) can control human minds and bodies.

That’s a lot of characters to get to know all at once, right? Two or three of them could’ve been cut from the film and it would’ve barely impacted the overall plot. In order to cram them all in, the film feels every minute of its more than two-and-a-half hours.

Still, you can understand why the filmmakers want this to breathe. As the recut version of Justice League recently showed, it took a much longer running time for that to work. Pretty much the only superhero team movie that leapt out of the blocks from a standing start was Guardians of the Galaxy, but it had a lot of humour to balance the existential heaviness.

It’s not that Eternals is absent humour, or (all of) the characters are uninteresting, it just lacks focus. Chan’s Sersi shouldn’t have been the film’s centre — all she has to do before the final reel is feel heartache over her ex-husband and come to terms with more responsibility for the group, which amounts to her staring off into the distance. Eternals spends too much time with characters posing against beautiful backdrops, staring into the distance.

Barry Keoghan’s Druig is at the core of a debate on the right way to use power, whether it’s ethical to save human beings from themselves. That’s maybe the most potent and interesting query in a superhero movie for a long time, but it’s a problem that once again the movie doesn’t care much about, and gets solved in a single scene.

Eternals makes an effort to bring in new elements to the MCU, with its first gay, family man superhero, a deaf superhero, and its first sex scene. Can’t argue with any of that. 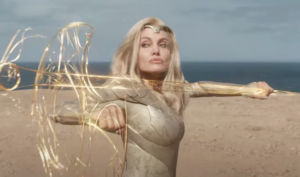 This while the film makes Angelina Jolie’s character the dullest of the bunch. How does anyone make Jolie, an electric presence in movies like Wanted, Girl Interrupted, and Gia, so uninteresting?

That question could be applied to a lot of what goes on in Eternals. With the talent arrayed it should have a zip it’s missing.

Zhao has proven herself to be a talented, unique filmmaking voice, but even with this film’s philosophical ambition and Zhao’s signature golden-hour visuals in place, all gussied up in an epic scale it feels like anything resembling spontaneous fun has been squeezed out, replaced by an awkward, art-house solemnity. 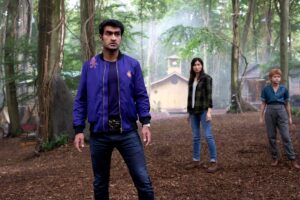 It doesn’t help that The Deviants are the least charismatic villains we’ve seen since Ultron‘s hoard of murderbots. It turns out they play a lot less of a key role in the denouement, which is a pleasant surprise. What these films have proven is your average CGI beastie is so much less interesting an antagonist than a Josh Brolin, a Robert Redford, or a Jeff Goldblum.

As a last thought — further to that conclusion — the film does achieve a peculiar grace in the final act when the scale gets galactic and the team unites to do something we’ve never seen done quite this way before. There’s something special in that moment, I don’t deny it — even if much that went before didn’t work for me.