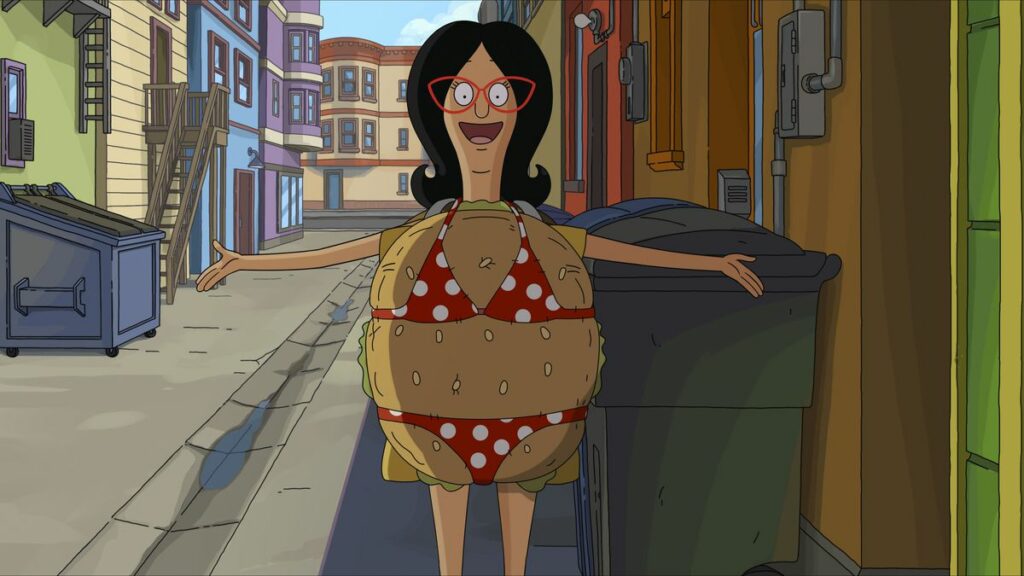 Right off I must admit I’ve never watched the Bob’s Burgers TV series, so I recognize I may have a disadvantage compared to folks who know and love these characters.

This is more or less my first impression of the Belcher family, and that impression is, sadly, not great. I know people really dig this show, but while I thought there was cleverness in the writing and the performances, I found the movie weirdly depressing. 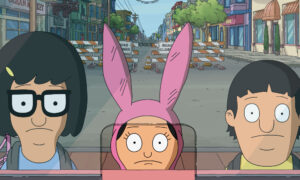 The Belchers live above their greasy diner in a no-hope town down the street from an antiquated fairground at the beach. Patriarch Bob (voiced by H Jon Benjamin) is gloomier than Eeyore, while by contrast his wife, Linda (John Roberts) is a New Jersey-accented optimist.

They’ve got three deeply messed up kids: teenaged Tina (Dan Mintz) who dreams of being the girlfriend to an idiot boy in her class, the slightly younger, slightly thicker boy, Gene (Eugene Mirman), and the youngest, Louise (Kristen Schaal), who has genuine smarts and gumption even though she won’t stop wearing a hat with pink bunny ears. 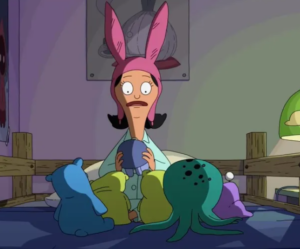 The Belchers are behind on their loan payments to the bank. They have a week to raise the cash when a sinkhole opens right in front of their business. They also owe rent to their kooky, vaudevillian landlord, Calvin Fischoeder (Kevin Kline), who has a peculiar brother, Felix (Zach Galifianakis), and cousin, Grover (David Wain).

If the Belchers aren’t able to pay Bob is convinced they’ll all end up living in a box in the street. 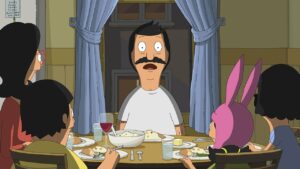 The family’s financial problems end up a launchpad for a murder and a whodunnit, and a lot of eccentric characters behaving, well, eccentrically.

Is it weird that so many of the female characters are voiced by men? It adds to an overall tone of creepiness I couldn’t shake. The grim reality of the Belcher’s lives and the grimy little town they live in, the flat animation and unpleasant, chinless characters — at its core this is a misery barely masked. It’s present day America through the lens of the mid-1930s, like Edward Hopper chewing aspirin. This strange anachronistic vibe continues into the occasional musical number, none of which have much enthusiasm. Everything’s slightly stale, slightly off.

At one point it looks like the whole family is going to be buried alive and it’s genuinely frightening, a real American horror story. 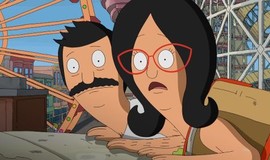 But the only real joy here are a few solid puns and the antics of the unaccountably wealthy Fischoeders. I ended up wishing the film was more about them, living in tree houses and planning escapes to Cuba in their personal submarines.