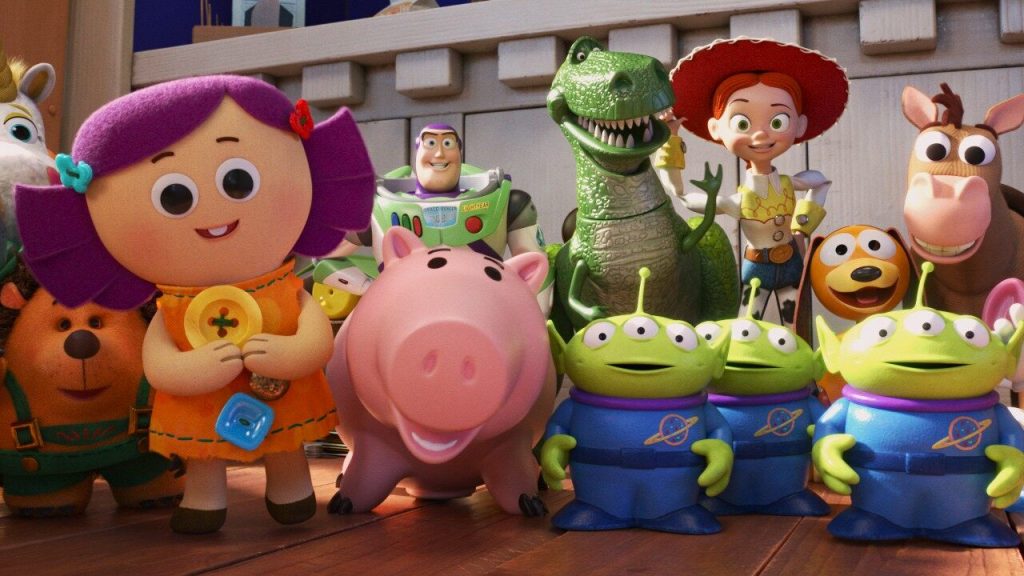 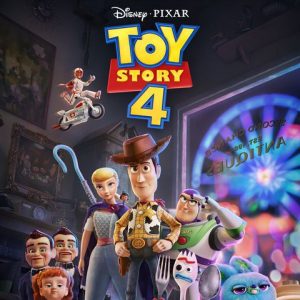 Since at least Toy Story 2—which remains The Empire Strikes Back of Pixar’s Toy Story franchise, the very best of a now-classic series of movies—these pictures have managed duelling themes: for kids they mine the fear, a traditional storytelling trope for Disney, of being separated from your parents and family, and for parents it’s the fear of kids growing up and not needing them anymore. Toy Story 4 continues both of those threads. In the fourth edition of a franchise you expect a certain amount of fatigue, and this one doesn’t entirely escape that sense of diminishing returns, but spending time with Woody, Buzz, and the rest of these vivid characters is still a thrill.

Following the events of Toy Story 3, where the toys found themselves in the possession of a new kid, Bonnie, Woody (voiced by Tom Hanks) isn’t the favourite toy anymore but he’s overcompensating, looking out for all of Bonnie’s needs. When she makes a toy out of a spork at kindergarten, Woody makes it his mission to protect “Forky” (voiced by Tony Hale), helping this weird, suicidal single-use plastic fellow realize he has worth as a child’s toy, when all he wants to be is in the trash. This existential awakening mirrors the arrival of Buzz Lightyear (voiced by Tim Allen) back in the original film, but the screenplay here makes explicit Woody’s repeated behaviour in light of a new arrival, framing it as obsessive.

Over and over again, stray toys in this movie are yearning to pair up with children—as we have learned, that is the highest, best achievement for a toy—but Woody takes the mission to extremes, his identity so tied up in the job. There’s an argument to be made that the entire Toy Story franchise is a workplace comedy. 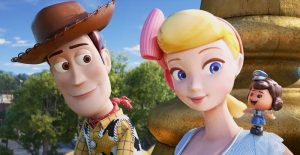 The real hero in Toy Story 4 is Bo Peep (voiced by Annie Potts). We find out early on why she wasn’t in the last movie, and since her last appearance she’s found some measure of independence. She’s also become something of an action hero—it’s great to see a female character save the day in one of these movies. Fresh supporting cast includes Christina Hendricks voicing Gabby Gabby, a vintage doll with a cadre of creepy ventriloquist dummy bodyguards, Keegan-Michael Key and Jordan Peele voicing Ducky and Bunny, two plush funfair prizes, and a currently resurgent Keanu Reeves voicing Duke Kaboom, a 1970s Canadian stunt-riding toy with an insecurity complex. 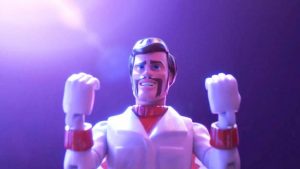 The frenetic midsection-to-finale of Toy Story 4—typical of what we’ve seen in these movies, usually involving Woody trying to save a random toy while Buzz tries to save Woody—is the part that’s starting to feel the most repetitious, but any over-familiarity in the plotting or pacing is balanced by the wonderful characters, both familiar and otherwise, and the quality of the animation continues to be industry leading, in places verging on photorealistic. 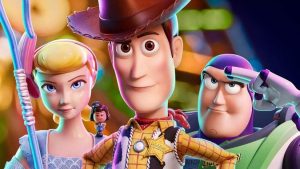 If there’s any part of this that you might call a genuine letdown, it’s Forky. The little guy has moments where he shines, but his arc is brief and, dare I say, disposable. He quickly becomes something to give Woody purpose rather than a character whose key question, “Why am I?” is ever given a satisfying answer. In the end, it’s Woody’s story—he’s the Skywalker who rises, or maybe just gets to retire. If this ends up being the last one of these movies, it’s not a bad place to leave him.