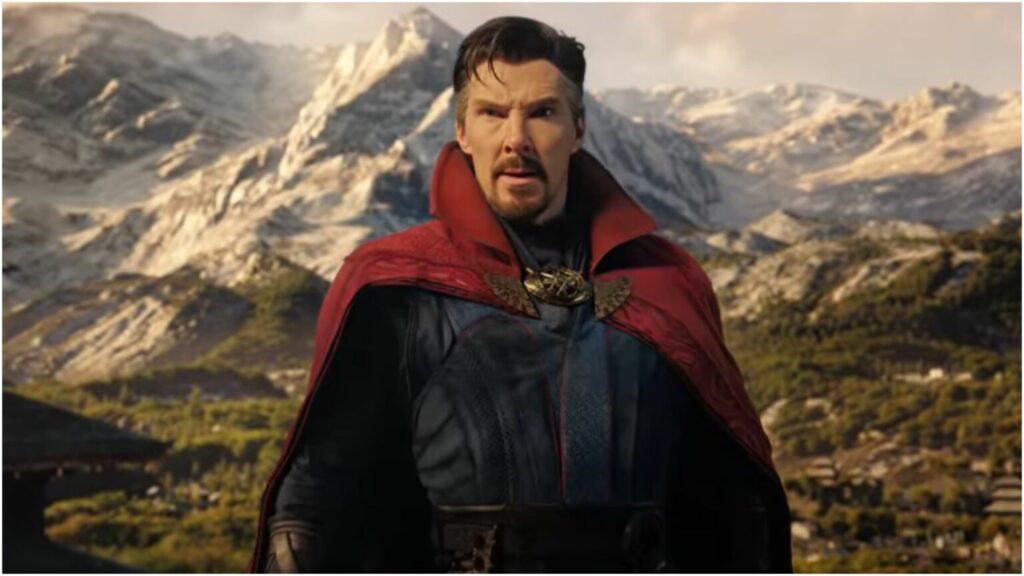 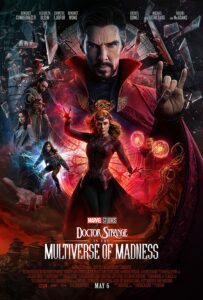 It’s time to recognize that there’s something off in the Marvel Cinematic Universe.

Ever since the unparalleled double-whammy of Avengers: Infinity War and Avengers: Endgame, the features from the House of Ideas have been at best uneven, at worst terrible.

Black Widow wasn’t as good as the character deserved, Shang-Chi was fun but not much more than that, and The Eternals was deeply ill-advised. (Spider-Man: No Way Home was a triumph, but it’s both of the MCU and its own thing, isn’t it? And I don’t just mean because Sony co-produces.) 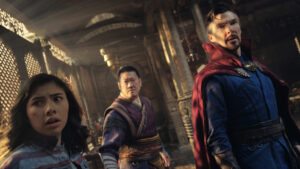 The cinematic misfires are worrying in comparison to the mostly sterling MCU series on Disney+.

Of those TV shows, consider Moon Knight — a wildly unpredictable tale of a hero possessed by an Egyptian moon god while dealing with serious mental health challenges. Or Loki, a very Dr Who-esque exploration of identity via time-travel. Or Hawkeye, a delightful Christmas present I didn’t know I wanted.

And it all started last year with WandaVision, which functioned as an exploration of grief as well as a tribute to classic sitcoms. 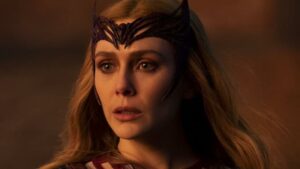 In it, we got to know a side of the mystic Sokovian, Wanda Maximoff (Elizabeth Olsen), we hadn’t seen before, how she managed all the trauma we saw her absorb in the more interesting MCU features of the past few years. We got to see the unhealthy ways she tried to mediate all that pain.

I don’t think it’s a spoiler to say that Wanda is the ostensible villain of Doctor Strange in the Multiverse of Madness. In some ways she’s also the central protagonist. 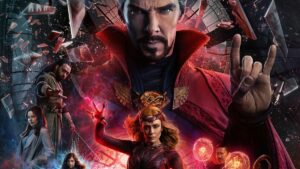 She’s been spending her downtime dipping into the Darkhold, a book of evil spells, which exacts a cost from whomever reads it — her anger and resentment is driving her to cross universes to where she can be with her children — who we learned in WandaVision were figments of her imagination.

In order to do that she needs to steal the gifts of America Chavez (Xochitl Gomez), a dimension-jumping teenager who has trouble controlling her power. Only Stephen Strange (Benedict Cumberbatch) and his associate, Wong (Benedict Wong), stand in Wanda’s way.

Given the conclusion of WandaVision, this feels entirely unfair to her character. She did some terrible things in her little town, but now we’re just going to double down on that by flattening all that grief into cartoon rage? This movie diminishes her — it’s reductive, disappointing, maybe even sexist that all she needs to feel fulfilled is her fantasy children and she’s willing to kill for them. Since seeing this movie I’ve read that the filmmakers hadn’t seen WandaVision and didn’t know what happened in that series. Sadly, it really shows. 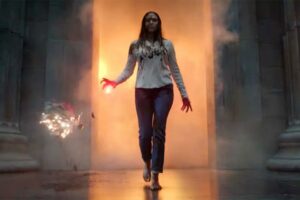 Full marks to legendary genre filmmaker Sam Raimi (The Evil Dead, Darkman, Spider-Man) for bringing a certain rollicking, whirlwind energy to bear — from scene to scene you’re never sure where this picture is going or how you’re getting there. But it also means it never quite settles down to a place where you get emotionally engaged in what’s going on. 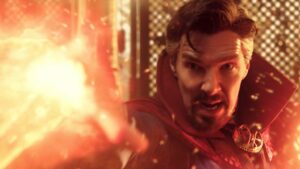 Chavez serves as a living macguffin, the thing our antagonist wants but someone we never really get to know. Meanwhile, Strange is still mooning over Christine Palmer (Rachel McAdams), his love interest who got away. But none of it registers as genuine stakes — we’re too busy being dazzled by all the shiny, sparkly things.

From the giant one-eyed squid to a magical battle with weaponized notes animated off sheet music to turning evil ghouls into a creepy flying cloak, I won’t deny there’s a lot of delicious eye candy on display.

One of my favourite moments is when Strange and Chavez jump between dimensions and cross through a number of weird universes… like the one where they’re made of paint. And later on, in tandem with the swooping, Disney-fied score from Danny Elfman, the film achieves an almost Tim Burton-esque level of kooky darkness.

I’m sure the hardcore Raimi fans out there will bridle at that comparison, but while I appreciate Raimi’s work, especially in the first Spider-Man trilogy, I don’t understand the wild affection for his films. Either way, this one does little to build on his reputation.

A picture crammed with wildly creative visuals but a slapdash narrative doesn’t a satisfying adventure make. 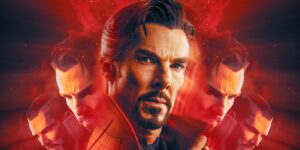 A brief appearance by one of the first Doctor Strange movie’s antagonists, Baron Mordo (Chiwetel Ejiofor), is largely wasted, while other characters from the many corners of the Marvel Universe (cinematic and otherwise) appear to little effect.

Thematically, the movie seems offhandedly interested in the pursuit fo happiness, but all of that is just window dressing to the locomotive engine of the (startlingly thin) plot.

And, naturally, the need to trigger a through-line to the next movie in the franchise requires the introduction of another recognizable character from the comics and a cliffhanger ending, which is really starting to feel mechanical. I’m not even going to get into the plot holes — given their size I could be lost in them forever.

There is a moment here so head-scratchingly bad I have to address it:

All Wanda keeps saying is she wants to cross over into a reality where she can be with her boys. Halfway into the story, that’s exactly what happens. But that doesn’t stop her from continuing on her mad mission to find Chavez. It makes no sense at all.

And, no, the influence of the Darkhold isn’t enough to explain this. 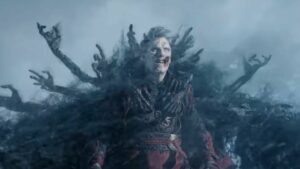 The introduction of a multiverse as common parlance in the MCU comes with its own problems. It could trigger a diminishing of jeopardy — if multiple versions of every individual exist across many universes, doesn’t that make everything matter less? They’ll always be able to introduce another version of any character who should meet a sudden demise. (Though I suppose that’s true of most Marvel heroes: Death is an impermanent state.)

It’s clear from Spider-Man: Into The Spiderverse  and Spider-Man: No Way Home that there is a way to do these stories well. This isn’t it.