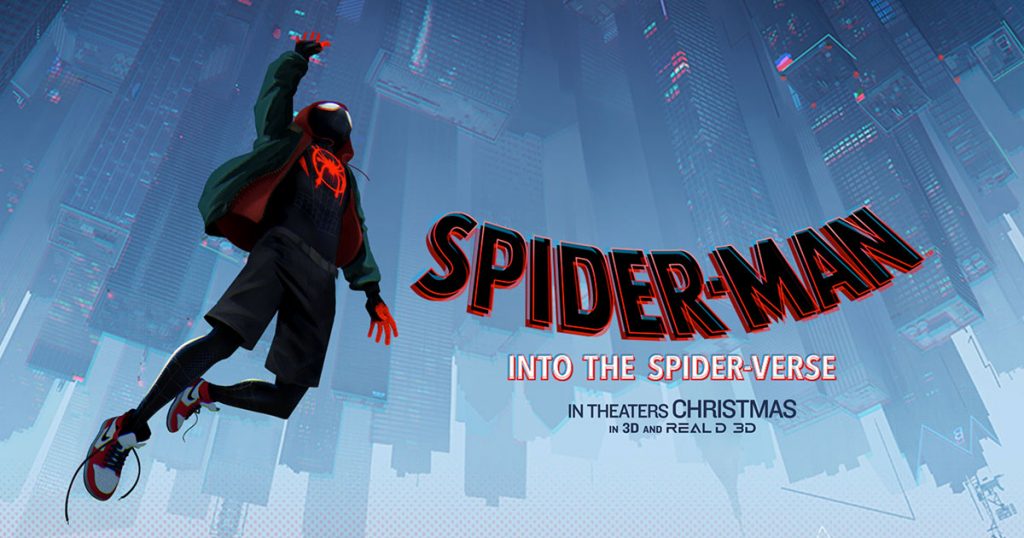 An animated return to Spider-Man from Sony, who signed away the rights to live-action Spider-tales back to Marvel, but can still use the character in animation. Call him the Loophole Wallcrawler. Everything about Sony’s use of the character recently has felt soulless and calculated—let’s not forget it was Sony who rebooted Spider-Man so swiftly after the Sam Raimi pictures in order to hang onto the property, with movies that will not be fondly remembered.

But in order to distinguish this take from the Marvel Studios/Tom Holland Spider-Man, this movie is far more inspired by and indebted to its comic book origins and earlier versions of animated Spider-Man. It’s far from perfect, but it has a lot of energy and smarts, and is better than we had any right to expect. 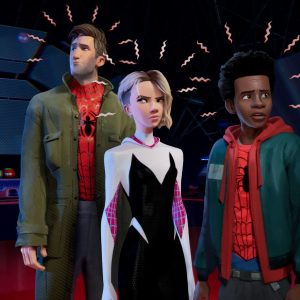 In the opener we meet the Spider-Man akin to the main Marvel mythos, a 28-year-old Peter Parker, but we soon discover he’s a parallel universe Spider-Man, and he’s not the only one. A massive subterranean super-collider run by Wilson “The Kingpin” Fisk (voiced by Liev Schreiber, bringing a Queens accent to the table, and with Fisk’s massive build looking very much like the Bill Sienkiewicz version) has the villain trying to bring alternate universe versions of his wife and son into this world, but instead brings forth a host of Spider-People, including a more mature Peter Parker (Jake Johnson), SpiderGwen (Hailee Steinfeld) , Spider-Man Noir (Nicolas Cage), and none other than the cartoony pig, Spider-Ham (John Mulaney). But the central character here is Miles Morales (voiced by Shameik Moore), the Afro-Latino student with a father (Brian Tyree Henry) who’s a cop and an uncle (Mahershala Ali) who’s a badass. Miles is the one who gets bit by a spider, and the one who has to come to grips with these strange and, in his case, inconsistent powers.

It’s a solid story, and different enough that it doesn’t feel anything like any of the six Spider-Man movies we’ve already seen this century. The animation is spectacularly zippy—I watched it in 2D, which I’m glad of because the visuals already pop with an energy that in 3D would’ve likely feel dizzying. The production design includes regular callbacks to the comics, including thought balloons, captions, and split-screen effects, as well as pop art dot patterns. 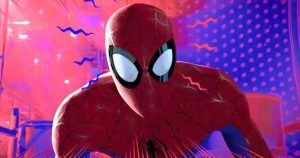 I liked all of that, until the final act, where the visuals became more like eye-frying than eye-catching. Also, the soundtrack leans heavily on recent pop—your mileage may vary, but to my ears it’s the kind of soul-free music that years from now will badly date the film. More problematic are plot holes that you could drive a Spider-Mobile through. What exactly is the deal with the spider that bites Miles Morales? How is it that he reads comics about Spider-Man in his room that show Spider-Man’s true identity, but then later it’s revealed on the news? How and why is it that these Spider-People recognize each other? How is it Morales knows who “The Kingpin” is? 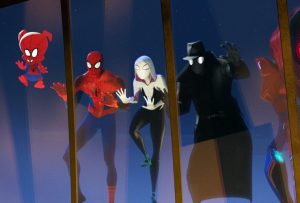 I suppose in a story about a talking Spiderpig travelling between dimensions, it might be fair to treat some of those issues as not-worth-the-trouble, but internal logic is important, even in an animated super-hero feature. Fortunately, the enthusiasm and spirit on display here carries the day, making for a frizzy, fun, if somewhat forgettable adventure. 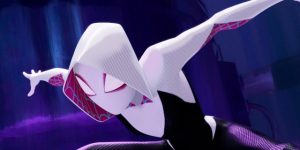