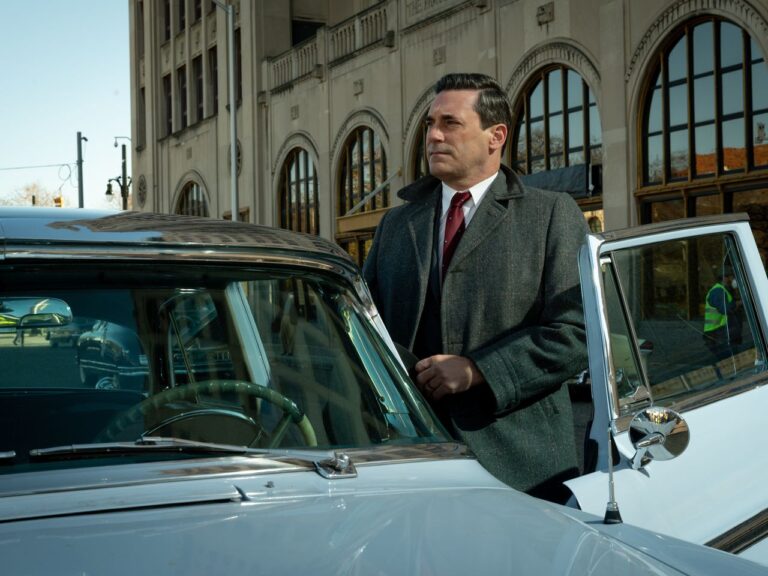 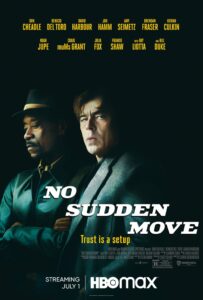 Detroit, 1954. Curt Goynes (Don Cheadle) gets offered a job fresh out of prison, the kind work that involves heaters and a wad of cash for three hours of his time. He meets up with Ronald Russo (Benicio Del Toro) and Charley (Kieran Culkin), a smart fella named Doug Jones (Brendan Fraser) pulling the strings.

Wearing ridiculous masks, they invade the Wertz home, terrorizing Matt and Mary (David Harbour and Amy Seimetz) and their two kids, Matthew Jr and Peggy (Noah Jupe and Lucy Holt). They want number-cruncher Matt to get a document from the safe in Matt’s boss’ office. Pretty simple, right? Nope. This operation goes south. That brings in a cop, Joe Finney (Jon Hamm), a gangster named Capelli (Ray Liotta), and his wife (Julia Fox).

Since Soderbergh came out of retirement, he’s been prolific and never less than interesting, with films like High Flying Bird,  The Laundromat, and Let Them All Talk. This light-on-its-feet crime drama is right in his sweet spot — approaching the genius of Out Of Sight, with a bit of a Coen-esque spin — though on a Venn Diagram of Soderbergh’s and the Coen Brothers’ work you’ll see plenty of overlap in careers that have run over more than 30 years. They mostly share an abiding love for American genre movies. 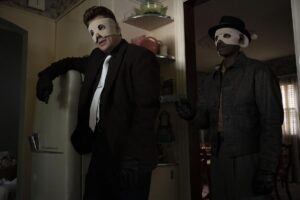 Despite Soderbergh’s confidence and abilities, his achilles’ heel as a storyteller is a restless formalism. He sometimes seems more interested in the structure of his films than their themes.

The major stylistic flourish this time out is choosing to shoot with a very wide-angle lens for most, if not all, the shots, complete with a vignette filter. (Soderbergh’s serving as his own cinematographer here, under the pseudonym Peter Andrews.) As soon as the camera pans, we get potent, even distracting, distortion. This would be queasy-making on a big screen, so I guess it’s a good thing its on Crave. 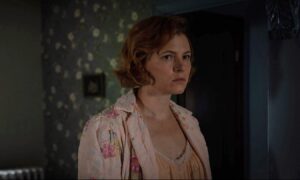 Which is fine. It does tend to drive home the fact that this is a story with characters moving through dizzying moral uncertainty. No Sudden Move dips deeply into noir — everyone here has to live, or die, with decisions made right on screen, tilting toward the dark or toward the light.

The picture, which starts as a loose remake of Desperate Hours, evolves nicely — the second half is a lot more fun than the first. The characters play a deadly game of cross and double-cross over a macguffin born out of the auto industry. Late arriving players include the awesome Bill Duke and an uncredited Matt Damon, playing the Ned Beatty-in-Network role, giving chilling speeches across a boardroom table. 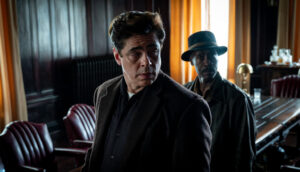 The picture’s playful tone and the script’s dry wit is to its credit — nowhere near the high-style of Soderbergh’s  Ocean‘s films or even Logan Lucky, but a lot more entertaining than The Good German or The Informant.  Much of that has to do with a game cast. 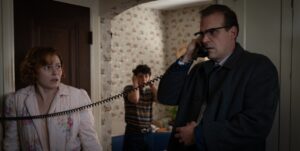 Harbour is especially good as the accountant in between a rock and a hard place, underplaying all the ham he brought to bear in the recent Black Widow. Cheadle is also excellent, delivering his lines with a growl we haven’t heard from him before. And Amy Seimetz is terrific as a woman who understands her husband a lot better than he thinks she does.