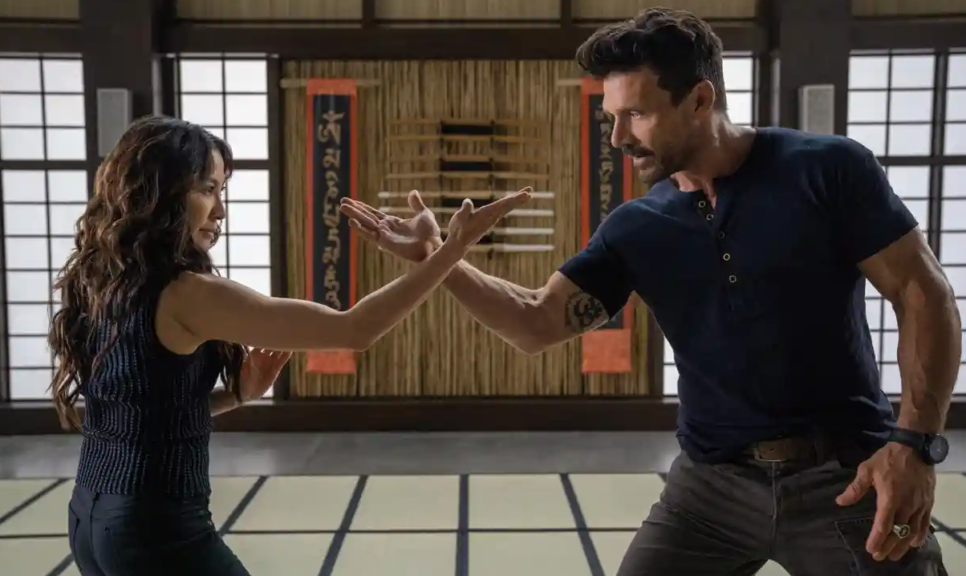 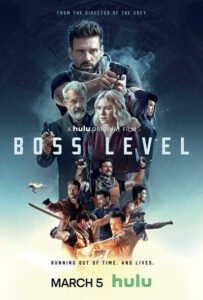 When we meet Roy Pulver (Frank Grillo), he’s already died and been revived more than 140 times. He’s been decapitated, crushed, and knocked into a bus. He’s deep into this time loop scenario, so familiar from Groundhog Day, Happy Death Day, and the recent Palm Springs. But, the fact he keeps getting murdered in new, creative ways, with a distinct video-game structure, it puts this movie closest to the action of Edge Of Tomorrow, with added jokes and heavy dollop of tiresome machismo.

Makes sense — Joe Carnahan has built a career around tough-guy posturing in so-so movies like Smokin’ Aces and The A-Team. But while Boss Level starts off looking like it’s going to be an uninspired carbon copy of better films, Carnahan and his cronies manage to surprise, locating  enough fresh ideas, even a measure of heart, to approach something original. 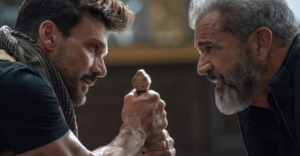 Part of the reason the opening gambit for this movie feels so rote has to do with casting. Grillo was terrific as the villain Rumlow, otherwise known as Crossbones, in Captain America: The Winter Soldier and Captain America: Civil War, but while he’s carved out a career away from the MCU in action b-movies, I’m not picking up much genuine movie-star charisma off him. Is he someone we want to spend 90 minutes with? I’m unconvinced. It doesn’t help that his character, Roy, is such an asshole, a special forces officer who abandoned his son. 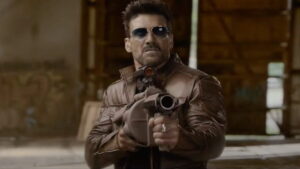 Then you’ve got Naomi Watts as his ex, Jemma, and she seems a little lost with this material. Jemma’s been working on some kind of time-travel device, which clearly is responsible for the pickle Roy finds himself in. Her boss is the real problem. Mel Gibson plays Colonel Ventor in a single mode — seething. Not much suspense here whether he’s gonna be the baddie, especially as he and his hulking henchman (Will Sasso) use surveillance tech to listen in on Jemma’s every conversation.

In the midst of this we get glorified cameos from Ken Jeong and Michelle Yeoh, both of whom the movie could use more of. It could also use bigger laughs: Boss Level isn’t as funny as it thinks it is.

But, as we go along, the creativity of the action beats start to impress. We get to know better a few of the colourful assassins who’ve been employed to kill Roy, and the picture introduces Roy’s 11-year-old son, Joe (Rio Grillo, Frank’s son in RL), who’s a fine young actor. Once Roy starts to figure out Joe needs to be his priority, not just killing a bunch of people, we start to care about his plight. 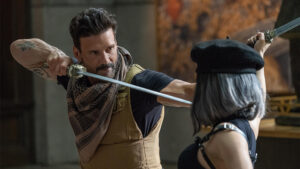 By the time Roy finds its way to  Ventor, and starts to figure out the larger plan put in place by Jemma, the movie’s really cooking, turning into a genuine treat for action fans.

Also, full marks to Carnahan and his collaborators for the clever use of  “Time Has Come Today” by The Chambers Brothers and “Foreplay – Long Time” by Boston on the soundtrack. Boss Level is at its best in the cheerful carnage scored to these classics.