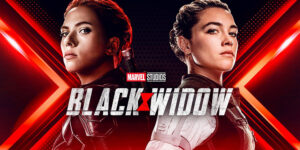 My first look at the new Marvel Studios picture Black Widow came from a screener I kindly received from those Disney folks. Tonight, seeing it for a second time with an audience — even a limited opening-night audience in these Covid times — was a wholly different experience.

This is the first Marvel movie that I watched the first time at home. Every single one of the previous 23 I saw for the first time on the big screen, and most of them with an opening-night audience.

It makes a huge difference.

Not just the spectacle that is so much more intense at the cinema, not just the energy of an opening night crowd, so excited to see the new superhero blockbuster,  the next puzzle piece of the ongoing Marvel experiment, but the overall good time at the movies.

This may be obvious to you, dear reader, but tonight was a reminder to me: These movies were really meant to be seen on the biggest screen possible, especially the first time you see them. 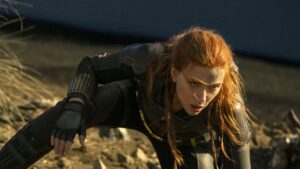 Further to that thought, even when I’ve watched an MCU movie a second or third time on Disney+ or Blu-Ray, I’m reconnecting with that first time I saw it in a crowd and the excitement of that experience.

I say all this not to undercut my first impressions of Black Widow, which I still stand by, but to acknowledge how different it is to see it in cinemas. You have an obvious choice ahead of you if you want to watch it: catch a screening in cinema or subscribe to Disney+ and pay a premium cost for this particular release.

And while the cinema may not be available for everybody, that’s what I’d recommend, at least the first time.

Another universal part of the MCU I’ve noticed? I’ve always enjoyed the movies more the second time I see them. That’s true of even the weakest of the bunch — Ant-Man and The Wasp, Iron Man 2, and Captain Marvel, I’m looking at you — each has appealed in a new way.

Black Widow is no different in that regard. 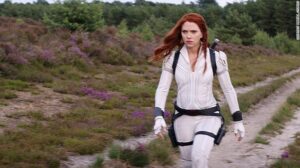 It’s still not the Natasha Romanoff movie I wanted to see, the one that digs deep into her past to reveal things about her that we didn’t already know. It elucidates a few points, but leaves Romanoff largely unchanged. I’ll reiterate my problem with the villains, especially the tragedy of Taskmaster, who should have been more of a presence, and a threat. 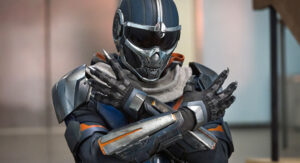 Weirdly, though I wasn’t the biggest fan of the picture, I thought the Jennifer Lawrence thriller, Red Sparrow delivered some of that grit I was looking for from Black Widow, while many of the six Mission: Impossible movies (to date) delivered the level of surprising spygames, suspense, and emotion with more satisfaction. 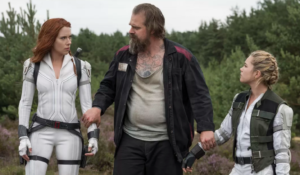 But as a self-contained Black Widow movie, it does deliver.  The production design is terrific, everything from the score to the costumes to the cinematography.

The artificial family that director Cate Shortland and her collaborators build around Natasha has an awkward charm. I liked David Harbour’s performance more the second time around, and though the script doesn’t really sell a surprising change of heart for one particular character at the beginning of the third act, I picked up and enjoyed a few more of the plot nuances this time around that I may have missed the first time.

And though in some ways she’s not the star of the show, ceding emotional ground and screen time to her “little sister,” Florence Pugh, Scarlett Johansson knows this character inside and out, and roots the story with that clarity and familiarity.

The key relationship between the two women is a pleasure to witness, especially the finely crafted banter. Yelena calls Natasha on her heroic image, the celebrity of it, when she knows the dark truth underneath. Natasha has become James Bond, the world’s most famous spy. What an oxymoron. 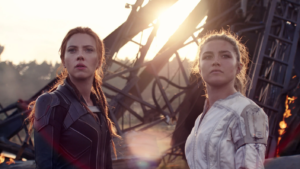 If the movie didn’t need to cleave toward all those repetitive action set-pieces, or need to conclude with enormous chunks of masonry falling from the sky, imagine what these performers could do with material that had the freedom to be a little looser than the Marvel formula allows. 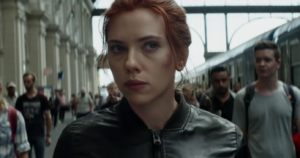 It makes me wonder if the Disney+ Marvel streaming series might actually offer more creative storytelling for these characters, if only because they don’t always need to be 50% falling from a high place. I’m enjoying Loki, especially, and also appreciated The Falcon And The Winter Soldier and WandaVision.

Too bad you can’t watch those at the cinema.