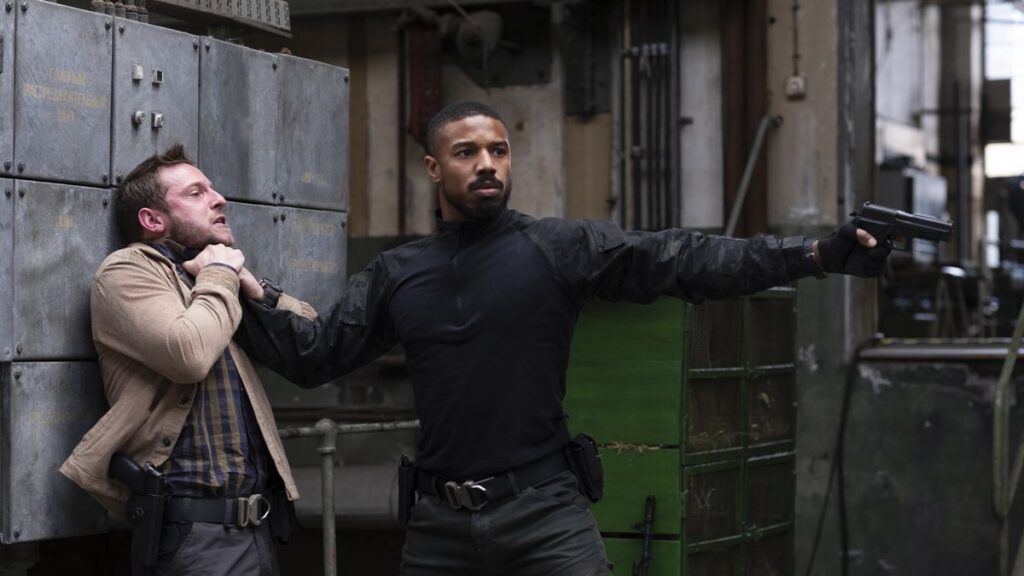 Directed by Stefano Sollima | Written by Taylor Sheridan and Will Staples, from the Tom Clancy novel (in case the title didn’t tip you off) | 109 min | Amazon Prime 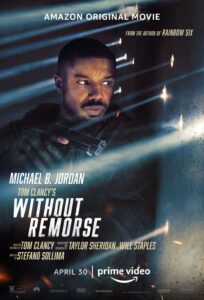 The Tom Clancy brand, which started as a series wildly popular airport reads, spy and military novels, in the 1980s and ’90s is in the 21st Century much more associated with video games like Rainbow Six than novels or movies.

The last Jack Ryan movie was nothing special, and three out of the other four are nothing to write home about, either.  Sure, the John Krasinski Jack Ryan TV series is a hit, and the arrival of this  project speaks to the possibility of an Amazon Clancy cinematic, or streaming, universe. It must make sense to the studio bean-counters: Michael B Jordan revived another fallow franchise, Rocky, with a spin-off, Creed. In Without Remorse, he’s John Kelly aka John Clark, another character from Clancy’s Ryan novels (who was previously essayed by Willem Dafoe), so presumably could team up with Ryan in the future.

Based on the quality of this effort, I’m not hugely excited by the prospect — this is a barely passable action movie that fails to offer the kind of plot surprises that make for a decent spy thriller.

We meet Kelly and his SEALs on a mission in Syria to extract a captive on the word of Ritter (Jamie Bell in the Henry Czerny role), a CIA flunky. Turns out the heavily armed men holding onto the target are Russian, not Syrian, which changes things for Kelly. I mean, I guess? The SEALs still end up killing them all.

Later on, back in the States, Kelly is retiring from the military to join private security. He’s about to have a family — his pregnant wife (Lauren London) is big as a house. Naturally, that’s when a Russian hit squad shows up, killing a number of Kelly’s brothers in arms and his wife, too, before he takes a few of them down. This is full-on fridging, made more frustrating because if it had just been Kelly’s comrades who were killed, his mission of revenge would’ve still been legit but it would’ve had more impact on his personal life, which would’ve made for a lot more interesting conflict and given London more to do.

As it turns out the movie’s other female lead, Kelly’s buddy, Karen Greer (Jodie Turner-Smith from  Queen and Slim and, franchise fans, the daughter of James Earl Jones’ General Greer from the Jack Ryan movies) doesn’t have much to do, either, except glower and pass on intel to forward the plot, while his government contact, Secretary Clay (Guy Pearce) seems as slimy as they come. 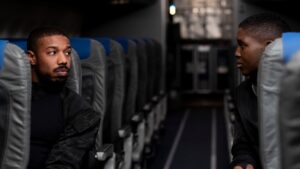 From here on, Kelly’s thirst for revenge ends up screwing up his life. At one point he actually steps into a burning car — kind of cool, actually — before he executes someone.

Despite this he somehow still gets chosen for a mission into Russian airspace and through the streets of Murmansk. A passenger plane crash into the drink is impressively shot, but the subsequent gun battle over and through many buildings is a serious let-down. It feels like the end of a particularly clumsy Western, which, in these post-Bourne, Wick and Atomic Blonde days, is inexcusable. 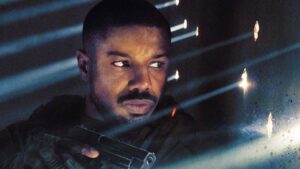 It’s one thing when video games are adapted to the movies — not that they’ve yet to make a single one worth watching — but it’s yet another when First Person Shooter action actually influences sequences in movies. That’s been happening for awhile now in plenty of b-movie and forgettable actioners. Segments of TCWR are painfully indebted to that kind of machine-tooled robotic style, eliminating a lot of the fun.

Worse, one of the soldiers on Kelly’s team dies and his final words are, “Tell my kids I love them,” possibly the most hackneyed bit of dialogue ever written in the past century of feature filmmaking. Not that we cared anyway, since we barely knew this dude.

Along the way we get Brett Gelman in a brief role, which struck me as odd casting. He does well to convey some important information, but I couldn’t quite shake my image of him as Fleabag’s sister’s asshole husband, even with a bomb strapped to his chest. The danger of casting comedic actors in thrillers, I suppose.

Eventually we’re headed back to Washington DC and the denoument, and if you haven’t figured out the villain way back in the first act you just haven’t been paying attention. 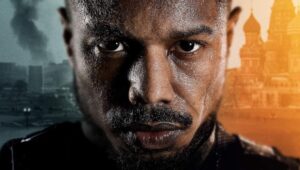 Director Sollima gave us the so-so Sicario sequel, which didn’t have much heart but it did manage a diverting plot and sinister tone. What’s most disappointing here is that co-writer Sheridan wrote the minor classic Hell Or High Water, which suggested a lot more sophistication than he brings to the table this time. Tom Clancy’s Without Remorse has a D-movie plot and character on an A-movie budget. It might offer passing interest to genre fans, but not much more.