Written and Directed by Christopher Nolan | 150 min | Crave Plus 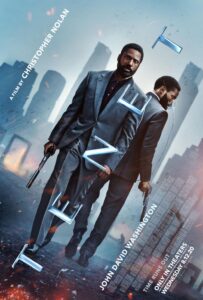 Christopher Nolan’s enormous, brilliant movies are never less than ambitious, and the best of them find a balance between the kinetic, the cerebral, and the passionate — I’m thinking of Memento, Inception, Interstellar, and Dunkirk, even his Dark Knight trilogy. His newest blockbuster nails those first two qualifications — kinetic and cerebral — but may be a touch too opaque to genuinely stir the heart.

Tenet is primarily an espionage action movie — a little more Mission: Impossible than James Bond — that rapidly corkscrews into an adventure in time travel. 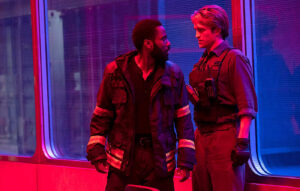 We open on John David Washington, only known as The Protagonist, who nearly is killed by a bullet that moves backward in time. This is during a dynamic opening sequence involving a military incursion on an individual target at a classical music concert. It turns out the bullet is connected to a tech conspiracy that could be all-life-in-the-universe threatening. 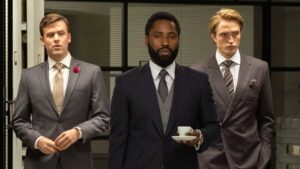 The Protagonist’s ability to take all this information in stride is impressive, but Nolan never been afraid of doubling down on exposition — he slings slightly stilted dialogue and jargon so fast everyone’s gotta keep up, both characters and us in the audience. He helps it along by placing some of these rapid-fire, if not entirely realistic, conversations in the mouths of capable talents such as Michael Caine, Martin Donovan, Aaron Taylor-Johnson, Himesh Patel, Dimple Kapadia, and Clémence Poésy, each providing a welcome bit of flavour in locations across the globe. 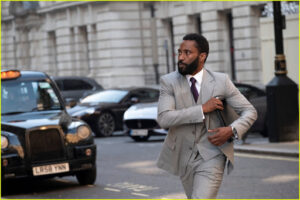 Washington seeks help from another agent, Neil, played by a nicely laconic Robert Pattinson, to manipulate a wealthy, unhappily married art dealer, Kat, (Elizabeth Debicki), in order to get to her arms-dealer husband, Andrei Sator (Kenneth Branagh, once again in his Jack Ryan: Shadow Recruit Russian accent). Sator’s somehow connected to that temporal tech/macguffin that ends up peeling back the structure of the movie and reversing it. 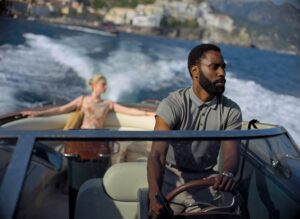 Nolan stages one action set-piece after another, adding time-travel complications to frequently head-scratching effect. He puts a mother’s love in his film’s emotional centre, but behind the heavy, shatterproof glass of the plot. We can see it, but we don’t get close. He also hints at romance, but disappointingly he never quite goes there. A love affair in the middle of all these twists would’ve likely helped us invest.

This is a typically gorgeous-looking picture — the special effects are, as per usual with Christopher Nolan, very impressive — but with a new editor on his team, Jennifer Lame (Marriage Story, Hereditary), it clips at a pace that barely gives us a chance to enjoy its widescreen vistas.

Nolan’s also brought on another fresh collaborator, composer Ludwig Göransson (Creed, Black Panther) whose score for Tenet is much more jittery and atonal than you might expect, with audio jags channelling The Prodigy. 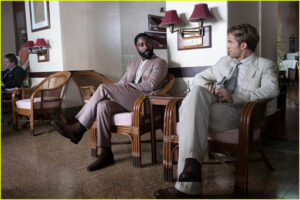 There’s no doubt Tenet is deeply inspired by Shane Carruth’s low-budget 2004 time-travel milestone Primer  but unlike that film Nolan’s is produced with the gross national product of a medium-sized country.

And that’s all a lot of fun, but Tenet is also a four dimensional puzzle that prioritizes its convolutions over character. You may enjoy the process of unspooling its reels (as I largely did), but this may be the first of Nolan’s films that actually requires a second (or third) screening to really get your head around. While the technical twists on display demand respect, the requirement of multiple viewings, especially during a pandemic, may be a bridge too far.