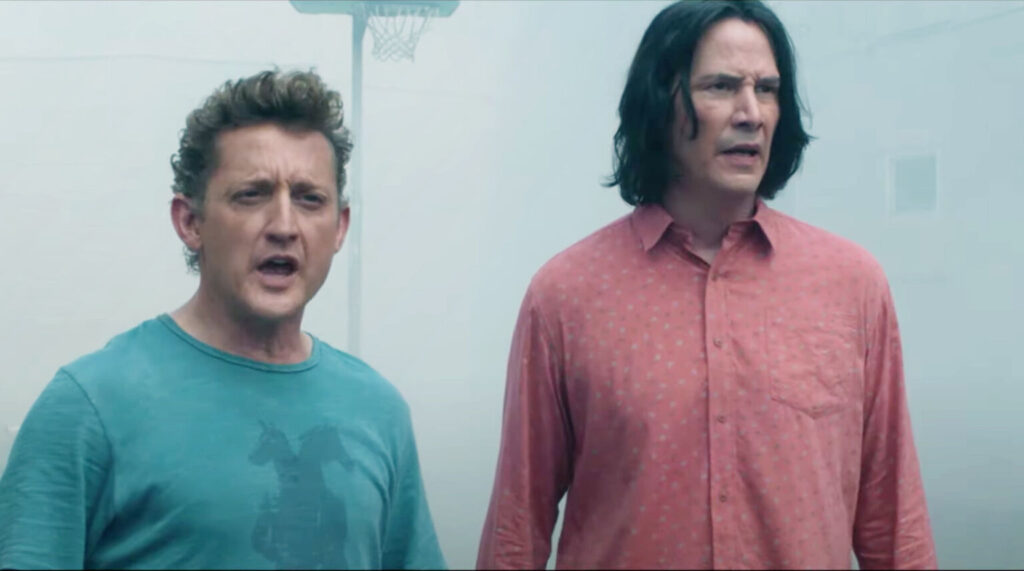 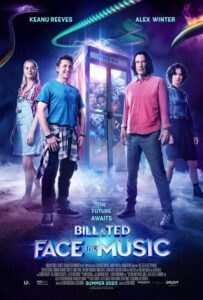 Back in 2012 I found myself in Los Angeles for work. I visited the Universal Studios Theme Park, and amongst the Simpsons and Jaws rides was a Bill & Ted ride, which in 2012 seemed if not ridiculous, then way too optimistic. At that point it had been 21 years since Bill & Ted’s Bogus Journey, the sequel to 1989’s Bill & Ted’s Excellent Adventure. 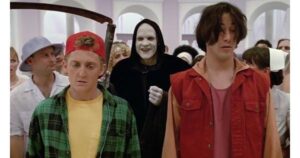 That film wasn’t especially, ah, heinous, especially as it introduced a very Bergmanesque Death (William Sadler) to the hijinks, but the franchise’s cultural currency was way old, dude.

Now in 2020 — 29 years since the last one, if you’re keeping count — we once again find ourselves in San Dimas California, where Bill S. Preston Esq. (Alex Winter) and Theodore Ted Logan (Keanu Reeves) are now middle-aged. Despite 25 years of trying, they have yet to write the song that righteous song. You know the one — it will unite the world (and save reality — that’s new). In fact, their star has diminished. Their wives (Erinn Hayes and Jayma Mays), princesses from the past, are the only breadwinners in the family, and their daughters, Thea and Billie (the most excellent Samara Weaving and Brigette Lundy-Paine) are chips off the old block. 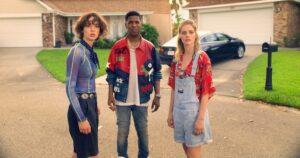 With the end of the world imminent, Bill and Ted figure they’ll use the time-travelling phone booth into the future and take the song from their future selves, but every future Bill and Ted they locate suggest things have just gotten worse, that they screwed it up. Worse, they’ve also somehow ruined their relationship with their wives and kids. This while Thea and Billie look to supplement their fathers’ band, Wyld Stallyns, with legendary talents from the past.

This is exactly as silly as the previous films, which is an achievement; they were exceedingly silly. Winter and Reeves play their familiar characters as only slightly wiser decades later, and the addition of their daughters in the time-travelling hijinks takes the film to some unexpected places. Weaving and Lundy-Paine are so plausible as the duo’s offspring, they may as well be clones.

A goofy killer robot named Dennis Caleb McCoy (Anthony Carrigan) is a welcome new character, as is Kelly (Kristen Schaal), the daughter of their former mentor from the future, Rufus (the late George Carlin, briefly seen here as a hologram). 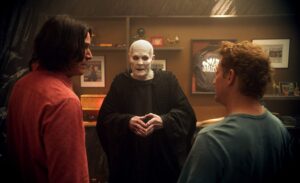 The biggest delight is the return of Death, and the reason he and Bill and Ted had a falling brings the lolz.