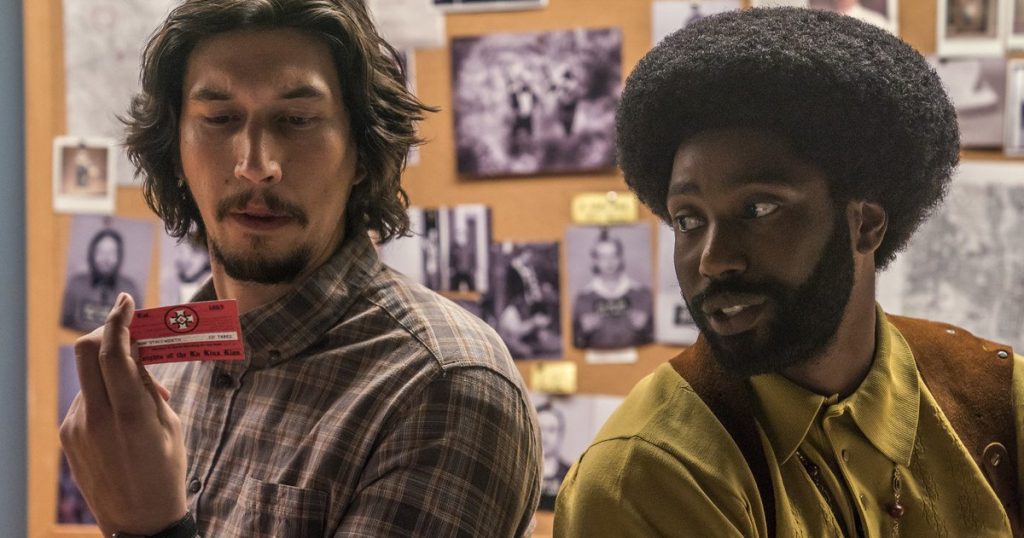 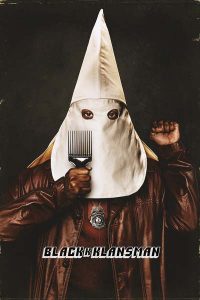 Thirty years out from Lee’s underappreciated second joint, School Daze, it’s a blast to be able to see a feature film of his that brings his recognizably visceral vision to bear, with a lot of his trademark humour on board, too. This is also the first Spike Lee feature to make it into cinemas in these parts in at least a decade, and it’s not like he’s not been busy, with many movies, documentaries, and shorts in the past few years that for one reason or another never opened wide. But the New York-based filmmaker’s true brand is one of political rage, and here he delivers.

Based on the true story of Ron Stallworth, the first African-American officer in the Colorado Springs police force in the early 1970s, Lee strikes a regularly off-balance tone to his picture. This material would’ve made an intense, straight-ahead suspense thriller, but Lee’s making a comedy. That’s not to say his righteous anger doesn’t permeate—far from it—but he regularly tips back into comic flavours, enjoying the absurdity of his lead’s unusual situation, a black officer who infiltrated the Klan. 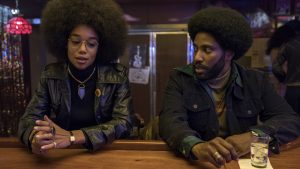 Stallworth (John David Washington, son of Denzel) is the “Jackie Robinson” of his police squad, earning the racist rebukes of his fellow cops as much as the public at large. He convinces his captain to let him go undercover, starting with checking out a black power gathering, organized by a local black student leader, Patrice (Laura Harrier, recently seen in Spider-Man: Homecoming). Then he calls the KKK, looking to sign up. Though Stallworth convinces on the phone—his “white phone voice” as plausible as any in Sorry To Bother You—he naturally needs to send someone else to impersonate him  when in-person meetings are required. Officer Flip Zimmerman (Adam Driver) is his guy, who winds up spouting some of the most appalling rhetoric in order to win the favour of the none-to-bright Colorado racists (including I, Tonya‘s hilarious Paul Walter Hauser), and eventually the infamous David Duke (Topher Grace, convincingly dickish).

(Oh, and just in case you’re wondering why a dude who looks and sounds an awful lot like Steve Buscemi is in the picture in a role smaller than Donny in The Big Lebowski, it’s his brother, Michael Joseph.)

Washington has charisma to burn as Stallworth, and carries most of the movie handily, but his scenes opposite Harrier feel stiff and unconvincing. It could be as simple a thing as chemistry, but their slow burn romance feels inessential, and much of it could’ve been cut from the film without much consequence to the main story. Major props to their hair and wardrobe, though, which is terrific, and their conversation about blaxploitation film, including posters onscreen and a discussion of Shaft vs Superfly, is a definite highlight. 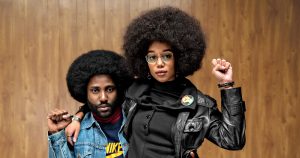 More time spent on Stallworth and Zimmerman’s connection might’ve made for a richer relationship there—the film’s lack of explanation why Zimmerman doesn’t just take over the phone duties from Stallworth is a distracting plot problem. Their obvious need to keep their shared character straight makes for a great scene when Stallworth coaches Zimmerman on how to speak the way he does, but that doesn’t amount to much payoff down the road.

Lee enriches the proceedings with roles for Alec Baldwin, Isiah Whitlock Jr, and Harry Belafonte, and a memorable score by Terence Blanchard with an unreleased track from Prince over the end credits.

The choice to emphasize the comedic here means BlacKkKlansman never threatens to feel like a hammer to the head, the way, say, Detroit sometimes did. It’s interesting the film seems ambivalent about the use of violence by African Americans to accomplish their goals, even as they’re victims of violence. The too-easy comeuppance of a racist cop in the final reel feels a little like audience pandering—could Lee be mellowing in the years since Do The Right Thing? 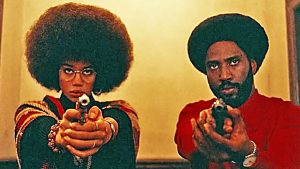 Don’t bet on it: With fiery imagery, a harrowing present-day documentary coda, and the words of Trump coming out of the mouth of David Duke, there’s no doubt his storytelling can still burn with a trash-can-through-the-window intensity. It’s hard to imagine race relations in America could be worse now than almost 50 years ago, but BlacKkKlansman makes a compelling case.