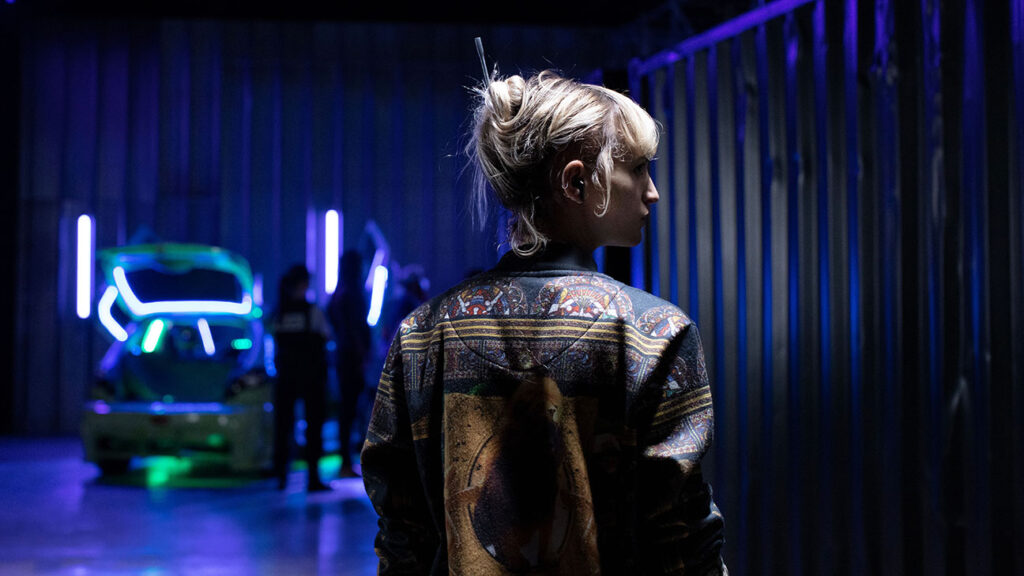 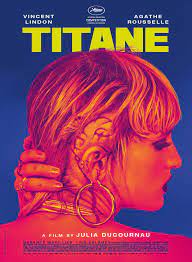 The only film in FIN’s 2021 Extreme program — can a program really be called a program if it only includes a single movie? Discuss — Titane is from the director of French cannibal coming-of-age thriller Raw, and arrives having already garnered a big award: It won the Palme d’Or at Cannes. This while it’s been earning plenty of polarizing response through its festival run — New York Times film critic Manohla Dargis called it “laughable.”

I also laughed at the movie, but that’s because for large chunks it’s a serial killer comedy. It’s also, in places, a body creeper in the Cronenberg tradition, a playful exercise in the fluidity of gender identity, and a story about love and acceptance. That’s where I found it most effective, relevant, and even moving. 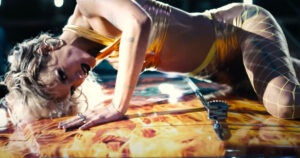 Alexia (Agathe Rousselle, entirely impressive) is an exotic dancer in a dystopic vision of southern France, a place of serial abuse and abducted children. She isn’t beyond skewering an overly aggressive fan in the brain with a knitting needle if he gets too close — she’s not bothered at all with a little extracurricular murder. She also enjoys getting it on in the back of a vintage, souped-up Caddy, except she seems to be having sex with the car itself. This isn’t a far cry from what we witnessed with Cameron Diaz in The Counselor, though this automotive intimacy has unintended consequences. She quickly discovers she’s pregnant, presumably by the automobile.

Things get out of hand, so Alexia finds sanctuary by impersonating a child vanished years before — breaking her nose in an brutally funny bus station bathroom scene — and somehow fooling the father, Vincent (Vincent Lindon), that his now grown son returned to him. 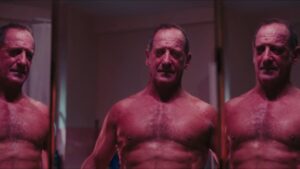 At this point, if you’re willing to accept impregnation by Cadillac, this impersonation is far from the least likely thing going on in the movie. With her hair cut, Alexia becomes Adrian, and joins Vincent’s squad of hyper-masculine firefighters who all live and train together.

These parallel subplots — Alexia the Killer on the run from the law, the cybernetic thing growing in her womb, and the developing trust between Adrian and his/her adoptive, unwell father figure, Vincent — uneasily jockey for position in the second half of the film. 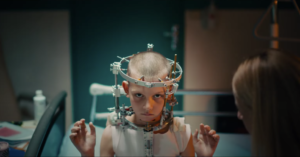 You get the feeling Ducournau could’ve dropped the whole car-sex thread and had a more affecting human drama, grounded in something approaching realism. It could just be about two damaged people finding each other in a crisis and being what the other needed the most. I guess she does achieve that anyway, but she’s just not satisfied with it, which in some ways is too bad. But people who love a more extreme version of cinema will certainly find things to enjoy here.

A coherent vision this isn’t, but delightfully bonkers and even subversive one? Without a doubt.