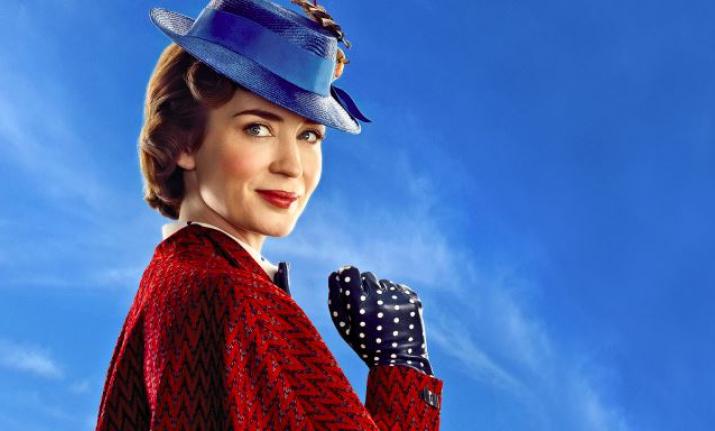 Mary Poppins (1964) | Directed by Robert Stevenson | Written by Bill Walsh and Don DaGradi, based on books by PL Travers | 139 min 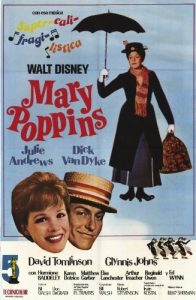 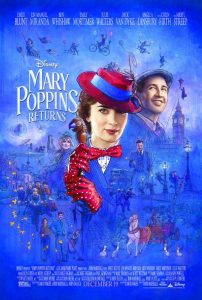 I had very little memory of the original Mary Poppins. I’d seen it maybe once when I was a kid, but I’d confused it in my head with Chitty Chitty Bang Bang, Bedknobs and Broomsticks, and maybe a few other kids movies with a distinctly British air. The merry-go-round horses were familiar, and Mary Poppins’ brittle-but-loving, unsentimental countenance. Julie Andrews was an early movie-star crush of mine, and I expect this film had a lot to do with that, more than The Sound Of Music, where she was just a little too wholesome. 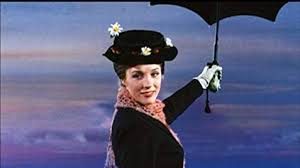 Watching the film again before taking in the sequel, I was surprised by just how slight the plot is. For a film running at two-hours-and-20-minutes, huge swaths of the film have no forward momentum, and no particular stakes. The magical governess of the title (Andrews) floats down from a cloud over London to the troubled Banks household, where the two children, Michael and Jane (Matthew Garber and Karen Dotrice, who cameos in the sequel), have scared off another nanny due to their apparently monstrous behaviour. It’s a bit of a head-scratcher how they could be so bad, as we see very little of that kind of petulance. The real problem is their banker father (David Tomlinson) is too involved in his work, and their suffragette mother (Glynis Johns) seems too driven by her cause (it’s set in 1910). The kids are just full of imagination, but very well-mannered otherwise. The character that experiences the biggest arc is actually Mr Banks, the kids’ father.

I enjoyed how Mary Poppins gently scolds the children, very much the model of beloved but stern schoolteacher. Apparently, Travers fought with Disney to maintain more of Poppins caustic, unsentimental attitude from her books, but was only partly successful. The story of Travers’ struggle to keep faith with her source material was dramatized in the 2013 feature Saving Mr Banks, starring Emma Thompson and Tom Hanks, but I gather its relationship to the truth of their relationship is a little like Disney’s Mary Poppins’ relation to her literary origins: greatly softened.

Despite this lack of plot, the musical, a mix of live-action and hand-animated sequences, charms with one banger track after another—”Supercalifragilisticexpialidocious” and “Stay Awake” are but two of the classics—and a lovely set design entirely shot in studio in California rather than in London. 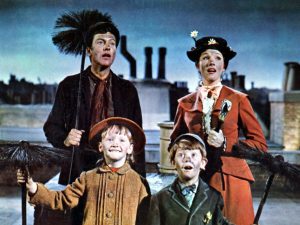 Also, Andrews arrived in her debut film a fully fledged star, and the picture sags a bit every time she’s off screen. Dick Van Dyke’s cockney accent has been held up for years as one of the worst accents in movie history, but looking back through the glaze of nostalgia, it’s actually not as bad as I expected, or, at least, not as distracting. He also plays Mr Dawes, the banker, and there affects a much more convincing posh London accent behind a lot of facial hair. What’s fun watching it is picking out the places where it inspired writers like JK Rowling and Neil Gaiman. The woman feeding the pigeons at St Paul’s seems an awful lot like Sandman‘s Mad Hettie, for example.

Speaking of nostalgic glaze, the sequel is slathered with it, but in a way that still manages to feel fresh. 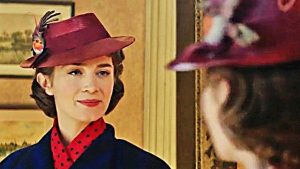 The first thing they’ve done is give the story actual stakes, which in some ways makes it a more engaging picture than the original. Michael Banks has grown up (to be Ben Whishaw) and works at the same bank his father did. It’s the Depression, and he’s stuck for money and on the verge of losing his house. His father may have purchased shares in the bank, but do you think he and his sister, Jane (Emily Mortimer), can find the documents? Colin Firth plays the current man in charge at the bank, the nephew of Mr Dawes the younger… who will make an appearance, too.

To complicate matters, Michael is a recent widower, leaving his three kids slightly wild, under the care of the housekeeper (Julie Walters). The chorus is provided by a lamplighter, Jack, played by Lin-Manuel Miranda. The brilliant theatrical impresario, singer and dancer is well cast here—I don’t necessarily buy him as a possible movie star, but in support, with a cockney accent almost as unlikely as Van Dyke’s, he works. 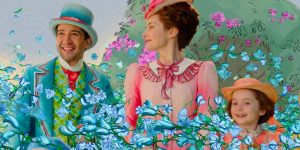 As Mary Poppins (you have to say her full name every time, for some reason), Emily Blunt isn’t doing an impersonation of Andrews. Her manner and accent is very different, but she does subtly wink at the camera from time to time, keeping our sympathies. It’s fun to watch her, and yet it’s interesting how peripheral she is to the story—just tweaking and jabbing it here and there to keep things going. She’s the one who knows everything’s going to turn out OK in the end, and her total confidence in that allows the periodic musical and animated detours to go off without a hitch. Song highlights include “A Cover Is Not A Book,” which really swings, and “Turning Turtle,” with Meryl Streep. 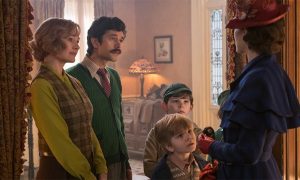 I can hardly complain about much in this dazzling little confection, other than maybe it’s as much a reboot as it is a sequel. Given how true Marshall and his collaborators are to the spirit of the original film, I was surprised no one, at any time, squeezed out a gleeful encore of “Supercalifragilisticexpialidocious.” I know it’s a long and complicated word, but hearing it again would’ve been a Christmas treat.