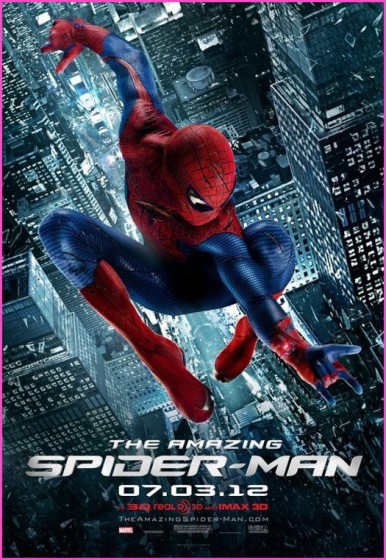 Directed by Marc Webb
Written by James Vanderbilt, Alvin Sargent and Steve Kloves
from a story by Vanderbilt and comics by Stan Lee and Steve Ditko.

This film really should credit John Romita, too, because as my friend Dave Howlett remarked, Emma Stone is the spitting image of that legendary Marvel artist’s Gwen Stacey, right down to her boots.

The Amazing Spider-Man got that much right.

If you’ve been reading my rants, you’ll know that back in June I gave my case as to why I wasn’t excited to see this movie. But I’m a comic book guy, so I was only able to hold out until the heavy hype had passed, until days before The Dark Knight Rises is going to be released. My expectations for the Christopher Nolan movie are much higher than they were for Spidey.

So, while I went in feeling pretty damn medium, I came out with an experience that justified my earlier concerns. Despite some minor updates from the first movie in the Sam Raimi/Tobey Maguire trilogy, this version of Spidey lands somewhere just above 2007’s dire Spider-Man 3 in quality. It’s a polished, slick piece of factory-tooled entertainment, offering few surprises.

We get the origin retold, with enough variation to be interesting: Science nerd Peter Parker (Andrew Garfield) is picked on by the jocks, especially the Alpha Meathead Flash Thompson (Chris Zylka), but still manages to catch the eye of hottie Gwen, daughter of a New York Police Captain (Denis Leary). Peter’s home life has been stressful since his parents (Campbell Scott and Embeth Davidtz) vanished when he was a kid, his father leaving his important science formula papers and his son with Peter’s Aunt May and Uncle Ben (Sally Field and Martin Sheen). Peter’s quite a tech wunderkind himself, and knowing his dad was working for local genetic labs Oscorp (conveniently headquartered in a giant tower located right where the Chrysler Building should be in midtown Manhattan), he heads over to, I dunno, snoop around. (Far too) coincidentally, Gwen works there, and is chums with Pete’s father’s old friend, Dr. Curt Conners (Rhys Ifans, who I’ll always remember in this). Spider-Man comic fans will know that Conners is a reasonable sort, except when his experiments turn him into something scaly and huge and mean. Interestingly, those genetic splicers at Oscorp also have a lot to do with Pete getting the proportionate strength and agility of a spider.

Beyond that, this Amazing Spider-Man is pretty damn familiar: Uncle Ben dies when the crook Peter ignores does the deed, Peter has a lot of residual guilt, fights a green menace on one of New York’s bridges, saving civilians with his unique webbing.

Andrew Garfield has an interesting physicality. The suit, which is very cool and shiny, works. The gangly look is great. But Garfield’s kind of nerdy wasn’t the brand I wanted for Peter Parker. He’s too magnetic, not invisible enough. I admit, those expectations are rooted in Maguire and my own history with the character, and I haven’t really kept up with recent comic Spider-Man happenings (at least since Parker revealed his secret identity to the world). Maybe Garfield is much more the 21st Century friendly neighbourhood arachnid. So, this much I’ll say: I liked him in the suit, and there are some sweet moments with Garfield and Stone that gave the film some zaz. And, as usual, Spidey figuring out his powers makes for some fun.

But I have many unanswered questions: Why does he take his mask off so often? Just so he can cry, which he does many times? Why is he so blubby? Why does Denis Leary always play the same ranty emotional notes? “Your boyfriend is a man of many masks?” Really? Who came up with that winner? And speaking of notes, why the annoyingly ubiquitous score backgrounding every scene?

Why is C. Thomas Howell in but two small scenes—an under-appreciated actor who, if Spider-Man had made it to the big screen in the 1980s, would have made an excellent Peter Parker? Why include that sequence with the cranes, which was lame and unnecessary?

Why does Gwen Stacey have so much access to Oscorp if she’s a teenage intern, and how does she have the experience to manufacture a genetic serum? Why does the CGI, while glossy and eye-popping, especially in 3D, still succeed in making the whole thing look like an expensive video game where nothing in the big action sequences seems particularly at stake because its so obviously unreal? And why does the script hit so many predictable moments without varying from the big-budget superhero formula? Where are the thrills in the third act?

And where the heck is J. Jonah Jameson?!!

This movie should serve as an example to directors and screenwriters taking on the genre going forward. This is truly the golden age of big-budget superhero flicks. Iron Man, The Dark Knight and The Avengers have all set the bar very high. Just offering professionalism and hitting the effects and action marks isn’t enough any more. Sure, if none of the movies listed above existed, along with the Raimi/Maguire trilogy of Spider-movies, I might have been more impressed by this one. But they do exist, and they make this webhead feel kind of rote.

(I hate being right, sometimes.)