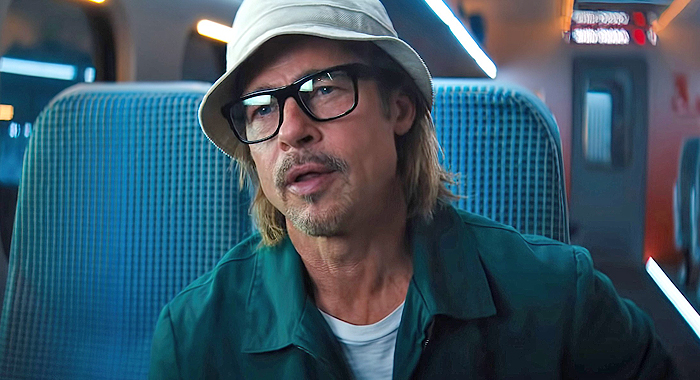 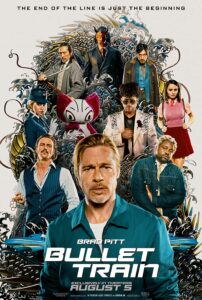 Back in the 1990s, the success of Quentin Tarantino’s Reservoir Dogs and Pulp Fiction spawned a collection of “Tarantino-esque” gangster pictures with titles like Things to Do in Denver When You’re Dead, 2 Days in The Valley, and Suicide Kings. These weren’t necessarily terrible movies — a wordy, violent noir comedy or thriller is rarely a bad thing — but it didn’t take long for the formula to get stale. And few had the genuine edge that Tarantino brought to his work.

Bullet Train feels like one of those copies of a copy, spliced with a bit of the choreographed action from the John Wick movies. (Filmmaker Leitch co-directed the first of that franchise, Atomic Blonde, and the abysmal Hobbs and Shaw.) The trailer for this picture looked like fun, but the movie itself is hollow and dull. Only the charisma of its cast makes it at all watchable, and even their charm runs out of track over more than two hours.

Ladybug (Brad Pitt) is a hired killer who’s struggling with the toxicity of his chosen profession, an assassin who’s fond of therapy speak. He’s on a Japanese bullet train to abscond with a briefcase. It’s full of money, of course, and is being held by two other assassins — Tangerine and Lemon Aaron Taylor-Johnson and Brian Tyree Henry, both Cockney, though Tyree Henry’s accent is slightly less than watertight — who’ve also captured a gangster’s son (Logan Lerman). 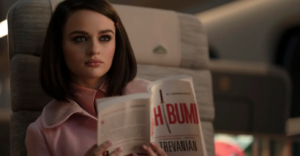 Also on this train is another killer named Prince (Joey King), another son of a gangster, Kimura (Andrew Koji), and a Mexican killer (Bad Bunny) seeking revenge. 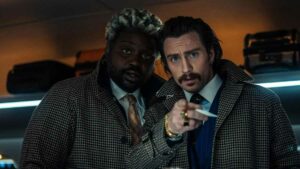 And that’s just the start of the complications that will eventually involve characters played by Zazie Beetz, Hiroyuki Sanada, Michael Shannon, and Sandra Bullock, with room for a couple more prominent movie stars in cameo roles and brief appearances by Heroes’ Masi Oka and The Boys‘ Karen Fukuhara. 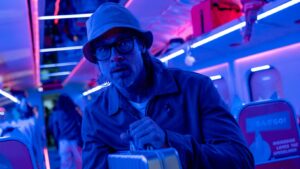 And some of that is fun. You point a camera at Brad Pitt and just let him do his thing — that’s a kind of entertainment. This is a talented, good-looking cast. Taylor-Johnson and Tyree Henry are having a good time with their roles, and Joey King could be a star in waiting. 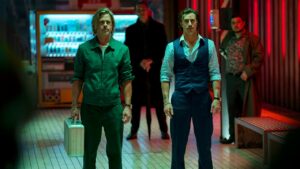 But it’s all  such a shrugger. Not only is the script not nearly as funny or clever as it thinks it is, the outrageousness of the plot holes are hard to ignore. Characters hang on the outside of the train, people are fighting and breaking stuff throughout the train, but at no time do conductors or officials ever stop the train to investigate. The movie finds ridiculous excuses to keep Ladybug onboard and chalks it up to his terminal bad luck. That kind of whimsy isn’t in Leitch’s toolbox. No, he’s much more comfortable with a bro-y, guy humour to break up the too-long scenes between close-quarter fisticuffs, and the stakes remain resolutely low for characters you never end up caring about.

I won’t even get into the issues of an American filmmaker adapting material from a Japanese writer, setting the movie in Japan, and the picture’s filter on local culture. I mean, this is practically a cartoon and difficult to take seriously on any front, but a few scenes here are pretty damn cringeworthy. 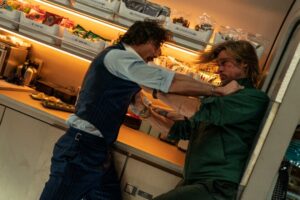 All this is exacerbated in Bullet Train with some of the worst CGI I’ve seen this year. We get a number of scenes where the filmmakers don’t even seem to care to maintain the illusion that the characters are actually on a moving train, and then, later, when the movie briefly turns into a disaster picture, none of that is in the slightest way convincing. The model work in a train thriller like The Cassandra Crossing 45 years ago was a lot more impressive than we what we get here. 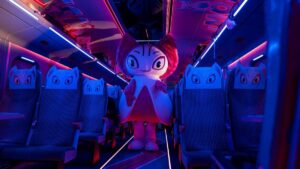 Further to obvious computer effects, a two-shot in the film’s last few moments serves as what not to do when filming actors together. One person looks crisp and naturally lit, but right next to them is another person slathered with the digital version of Vaseline where none of the lighting matches. You wonder whether the weirdly lit actor had it in their contract to show up in soft focus. For reasons.