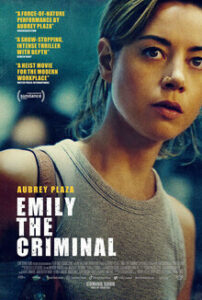 It’s not often an indie picture comes along to peel back the aching truths of society the way Emily The Criminal does — last year, only Zola had a similar, unexpectedly relevant edge. Even more infrequent is a film that satisfies as a genre picture — a crime thriller, in this case — while also working just as well on another level. This picture chews away at late capitalism and the myth of American meritocracy. 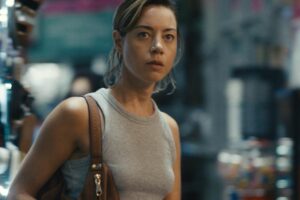 Emily, played with real grit by Aubrey Plaza, is a painter and illustrator from New Jersey (living in Los Angeles) but she hasn’t been working on her art practice lately. She’s been way too busy working at her day job to pay off the thousands of dollars of student debt she owes, but her catering gig barely pays enough to cover the interest. She lives in a crappy apartment with roommates with whom she barely speaks. A friend from high school, Liz (Megalyn Echikunwoke), wants to help get Emily a job in the company she works at, but who knows when that will happen. All this is complicated by Emily’s record for past transgressions, which includes a DUI and more. 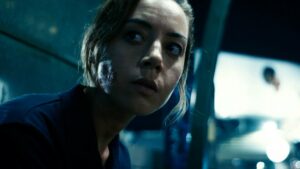 A coworker (Bernardo Badillo) in the catering kitchen gives Emily a phone number and an opportunity.  She’ll earn $200 to do a little thing. It’s illegal — using fraudulent credit cards to buy electronics, which are then sold off the back of a truck. But she does it and she pockets that cold hard cash. So starts her career in the black market. 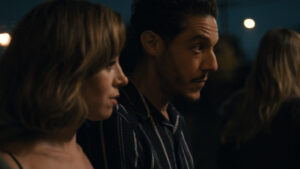 She clicks with Youcef (Theo Rossi), the fellow who runs the operation with his cousin, Khalil (Jonathan Avigdori). We get a sense that even while she never planned on these criminal enterprises — as a white woman she stands out amongst the visible minorities and immigrant desperate to eke out a living — she’s got a knack for it.. Emily is all about the entrepreneurial zeal. 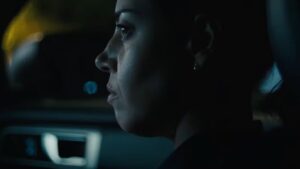 Though the picture over-relies on hand-held camera for a sense of realism, there’s no mistake in the way it frames Plaza in almost every scene. Her presence here is electric, with a rawness I’ve never seen from her before. She’s wildly talented, but might be almost too radical in her choices of projects to ever be a mainstream movie star. More power to her.

Emily’s growing sense of outrage fuels her decision-making and the film’s righteous indignation, but it’s also clear-eyed about the kind of danger it puts her in. There’s a line she crosses and once she does she can’t go back. As she says, “They take and they take and they take, and it won’t stop until you make your own rules.” 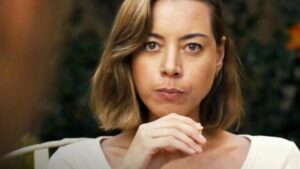 Emily The Criminal has white-hot rage seeded in its noirish foundations — full marks to John Patton Ford, a first-timer, for this vivid and unique film. A tip of the hat to Nathan Halpern for a precisely moody electronic score.

If you’ve struggled to make your way in the world with the crushing weight of debt, if you’ve been undervalued and asked to work to the bone for a lot less than you deserve, or if you’ve been expected to struggle through an unpaid internship while others do the same work for actual wages — you’ll find something here to relate to. Emily’s desperate decision-making will make all kinds of sense.

This is the kind of film that feels much more likely these days to appear without a lot of hype on a streaming service and sink without a trace. That it’s shown up in cinemas at all is a genuine treat. Don’t miss it.