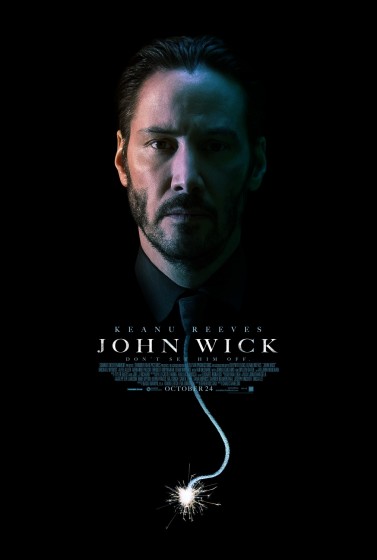 A few weeks ago I reviewed The Equalizer and A Walk Among The Tombstones, where I noticed this recurring theme in recent action movies of the middle-aged guy who finds redemption and makes amends for his past by picking up a gun and killing a lot of bad people. On the surface John Wick continues that thread with 50-year-old Keanu Reeves and a series of satisfying action sequences, but what lifts it head and shoulders above the other typical entries in the genre is its managing of tone. The movie is playful and funny. I hadn’t realized how much I’d missed that.

It comes from a pair of first time directors who’ve had long careers as stunt performers and coordinators, and what a first effort. And say what you will about Reeves, he has a good sense of his own strengths. Here he’s chosen a role that plays to them—graceful physicality, glowering intensity, and not a lot of dialogue.

When we meet his John he’s bleeding all over his nice suit from a gut wound, his enormous SUV smashed up. He’s watching a video on his phone of better times on a beach with his wife (Bridget Moynahan). Then we flash back to a largely dialogue-free segment of his time with her—a lot like that heartrending introduction to the Pixar movie Up, actually, and it ends in a similar way. She dies from an undetermined disease and he’s left alone in a gorgeous house in New Jersey. But, instead of floating away in a cloud of balloons,  he takes out a ’69 Mustang to a local airstrip and drives around like a maniac. It’s where he’s less likely to kill someone, I suppose.

But killing is what John Wick does best. We learn that quite quickly: He used to be part of an insular world of organized criminals and assassins, the kind of community that has its own money-lending institutions, hotels, and even currency. And when an heir to that world, Iosef (Alfie Allen, Theon Greyjoy from Game of Thrones), and his buddies steal John’s Mustang and kill his beagle, a parting gift from his wife, John figures its time to get back to work. Since John once killed three men with a pencil, Iosef’s fate seems sealed, but the situation is made more complicated by the fact Iosef’s father is Viggo (Michael Nyqvist), a Russian gangster in the upper echelons of this dark underworld, and John’s a former employee.

There’s a smidgen of a workplace comedy here: everyone knows each other. When John makes short work of a series of heavily armed intruders at his home and cop shows up, they’re on a first name basis. John is welcomed at a Manhattan hotel, and connects civilly with every other operative he runs into. It’s one of the more subtle pleasures of the film, the connections that go happily unexplained as John goes about the business of taking his revenge.

Stahelski and Leitch populate the film with great character actors, including Friday Night Lights‘ Adrianne Palicki and Willem Dafoe as fellow assassins, John Leguizamo as a chop-shop mechanic, Ian McShane as a fixer, and The Warriors‘ David Patrick Kelly as a clean-up man. And I’d argue that any film employing (not one, but two!) former cast members of The Wire is worth considering: Lance Reddick and Clarke Peters both appear in support. This kind of impressive casting, filling peripheral roles with actors who have serious weight, rounds out the movie and helps establish its internal world.

Not all of it works: there are a few continuity issues and plot holes, and the delightful light touch the film establishes in the midsection dissolves by the third act to the more heavy drama of the opening scenes. But a great flurry of exquisitely choreographed action sequences run throughout. The Red Circle nightclub set-piece is maybe the best demolishing of a gang of henchpeople I’ve seen since The Bride painted red the House of Blue Leaves. And the combination of sharp visuals and a gothic blues score—a grimy new track from Marilyn Manson called “Killing Strangers” is an underpinning highlight—sustain excitement. This is good stuff.

Except for maybe The Guest, I can’t think of another action picture I’ve enjoyed as much this past year. I hope John Wick proves to be a relaunching of Reeves’ career as a leading man, but there can be no doubt Stahelski, Leitch, and Kolstad have started something. I’ll look forward to whatever they do next.