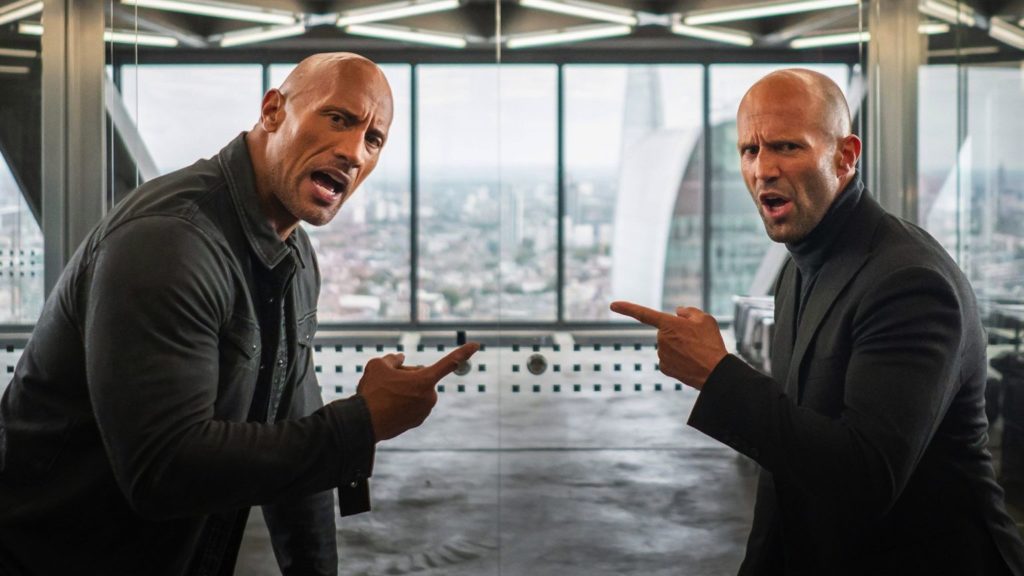 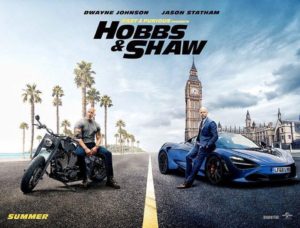 Makes a lot of sense that the stuntman-turned-filmmaker Leitch (John Wick, Atomic Blonde) would be called to extend the Fast & Furious brand in this spin-off. It features two of the three bullet-headed stars of the globally popular cars-and-bikinis-and-heists based franchise. For pure action as well as action-comedy, we’re living in a world where Leitch can take some credit for the way John Wick rules in hand-to-hand combat choreography, while Mission: Impossible is the king of nimble set-pieces, suspense and vehicular mayhem, and we go to the Marvel Studios movies for characters we care about in a big-budget fantasy milieu. In this field, the Fast & Furious movies have carved out a guilty-pleasure niche, featuring a terrific multiethnic cast, physics-defying stunts, and a good amount of ridiculous fun. 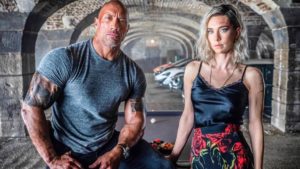 Hobbs and Shaw frequently errs on the side of ridiculous, but the fun is fleeting.

There’s not much point in rehashing the major continuity problems with this series—Deckard Shaw (Jason Statham) was introduced a couple movies ago as a ruthless murderer, and then reimagined as a roguish bad guy who made some mistakes but is still part of the extended Toretto “family.” Here he’s further retconned as a stylish cockney agent driving a McLaren supercar whose fellow agent sister, Hattie (Vanessa Kirby, getting to do more here than she did in Mission: Impossible- Fallout) grabs a viral weapon and injects it into her body, giving her 72 hours to get it out before she becomes Patient Zero to a worldwide airborne plague. 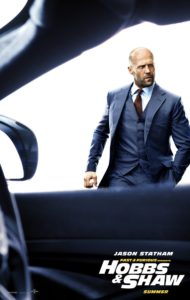 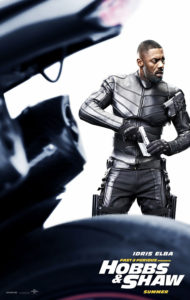 Naturally, Deckard is called in to find her, and so is Luke Hobbs (the forever cool Dwayne “The Rock” Johnson), who hate each other with cartoonish levels of schoolyard spite. A lot of that is just the two actors gritting their bristled jaws and spitting insults into the camera in between action set-pieces. The villain is named Brixton (Idris Elba), who works for a shadowy SPECTRE-like organization and has regular, painful cybernetic augmentation to give him superhuman strength. Naturally, he wants the virus. 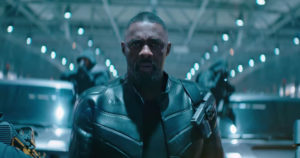 These four performers easily muster the charisma required to carry your average action picture, and do so here with the required panache. It’s nice to be reminded that relaxed, full-beam star power can be an actual pleasure to watch, and a couple of choice cameos by other marquee names help lift the material, too. 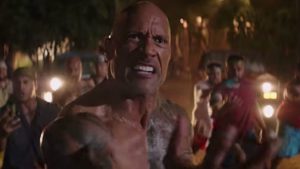 The problem is said material—Hobbs & Shaw contains some of the laziest plotting in a massive summer tentpole I’ve seen in awhile. It’s as if they’ve looked in the bucket of action-movie cliches and found the stalest, including the virus macguffin, the bromantic antagonism that goes nowhere, and the last act stand-off on home territory. In Fast & Furious movies past, the silliness of the plot or the action sequences, including the world’s longest runway, has been indulged in a way that brings a certain larger-than-life joy, but this time we get too much rote sameness. The fight sequences don’t match anything we saw in John Wick or Atomic Blonde, and aside from a car chase through London where that McLaren slides under an 18-wheeler, many of the sequences feel uninspired. Another vehicle race through an industrial zone could be an outtake from Statham’s Death Race remake(s), and the helicopter buggy race prominent in the trailer feels too much like a sequence created in a computer (which,  of course, it was), while Brixton’s superhuman abilities are never really game-changing. 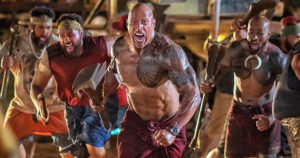 The only genuinely original (and, granted, pretty cool) feature here is Brixton’s cool remote-controlled motorcycle, which comes when he calls.