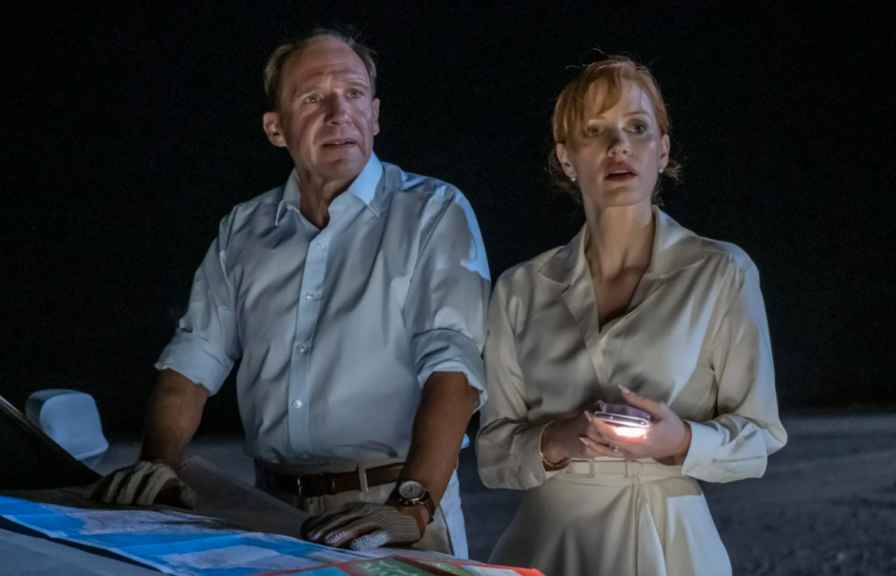 Directed by John Michael McDonagh | Written by McDonagh, from a novel by Lawrence Osborne | ▲▲▲△△ | VOD 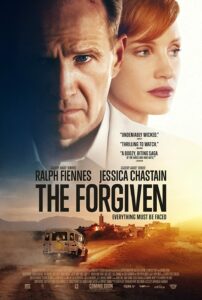 The Hennigers, Jo and David (Jessica Chastain and Ralph Fiennes), are a brittle and bickering couple who’ve arrived in Morocco looking to attend a high society party out in the desert. David’s particularly unbearable, an alcoholic bigot who thinks the worst of everything and everybody. Lost on a dark road they hit a local boy with their rented car. 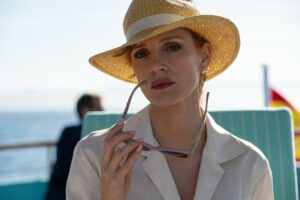 The party, when they finally arrive, is in full swing at the home of their friend, Richard (Matt Smith), who’s hosting with his partner, Dally (Caleb Landry Jones). Other attendees include society writer and photographer, Isabelle (Marie-Josée Croze), and witty and louche Tom (Christopher Abbott), who could easily be this movie’s talented Tom Ripley. 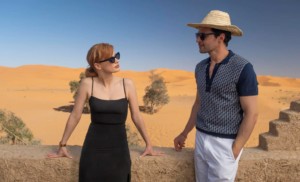 The set-up here is a little hard to take. I mean, I’m all for a scathing teardown on the bored and languid classes with a side of colonial cynicism — Johnny Depp and Prince Andrew both get a smack — but if you’re going to hook your audience either make it funny or gory. If nothing much happens it’s too easy to transfer a distaste for the characters to the movie as a whole. 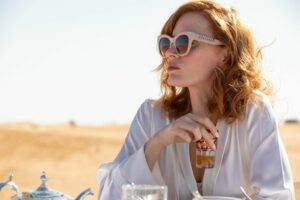 Fortunately, the picture gives us something more substantive to consider with the arrival of the boy’s father and Moroccan brethren — Ismael Kanater and Saïd Taghmaoui are stand-outs, as is Mourad Zaoui as Richard’s housekeeper.  The uneasy negotiations over the young man’s body and David’s decision-making takes us into the unknown. 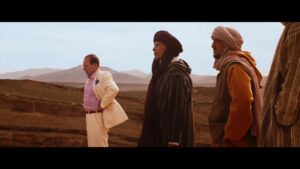 And that’s probably the best thing here, the evolving uncertainty of where it’s going and the mysteries of David’s journey of atonement, while the picture continually reexamines the privilege of the white visitors and the not-unrelated struggles of the Arab community.

Spending time with performers this talented is no hardship, though I sometimes wonder about Landry Jones. He can be entirely effective in something like Antiviral, but too often seems like a coked-up snake in a man suit. A counterbalance is Chastain and Abbott and their sizzling chemistry. 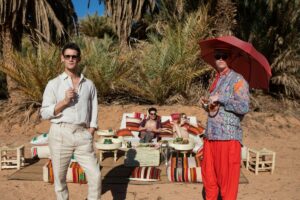 We also get the meal of Anglo-Irish filmmaker McDonagh’s dialogue. He’s a gifted wordsmith, just like his brother Martin (Three Billboards, In Bruges). I really liked John Michael’s last picture, the buddy-cop throwback War On Everyone, though his earlier work, The Guard and Cavalry, probably has more admirers. 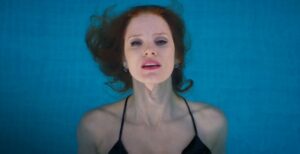 There’s something slightly fusty in the construction of this picture, a throwback to the Hollywood movies that populated cinemas in the 1940s and 1950s, which isn’t a bad thing. On the contrary, it’s enough for me to recommend it even while not all of its parts quite click together. 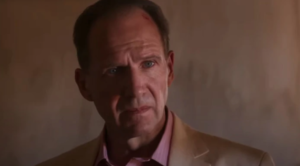 I also won’t deny the warm nostalgia of watching Ralph Fiennes squinting in the African sun — the location of previous triumphs, The English Patient and The Constant Gardener. The Forgiven works as the conclusion to that unofficial trilogy.