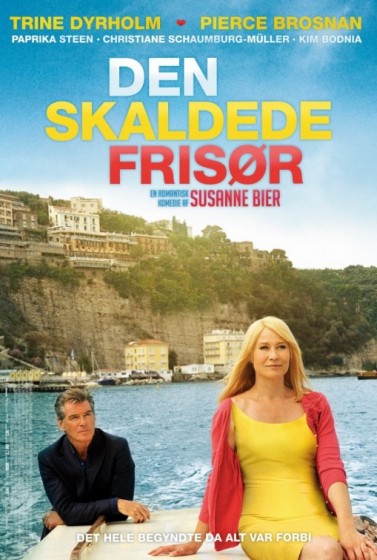 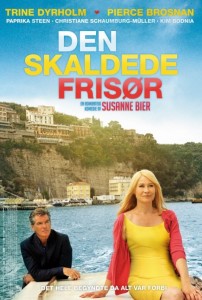 Love Is All You Need is exactly the kind of romantic comedy Hollywood has almost entirely forgotten how to make. It gave me a rush, for both it’s delicate balance of realism and sentiment and from sheer recognition of a beloved genre that I’ve missed: oh, yeah, this is how it’s done when it’s done well. This is what Woody Allen’s To Rome With Love might have been if he was firing on all cylinders. If there’s any justice, Love Is All You Need will be a huge hit internationally.

It’s directed by Academy Award-winning Susanne Bier and written by her longtime collaborator Anders Thomas Jensen, who also wrote one of my favourite AFF-screened films of the past, Wilbur Wants To Kill Himself. Trine Dyrholm (who’s also in the AFF-screening A Royal Affair) is Ida, a Copenhagen hairdresser who’s lost all her hair to cancer treatment. She’s not sure she’s free and clear yet, but just as she’s dealing with it all, she finds her husband has been having an affair. Her daughter is about to get married in Italy, and the fiance’s father is a wealthy widower, a fruit exporter working out of a Danish factory. He’s played by Pierce Brosnan, who spoke only a single word of Danish throughout the film. But this is one of those movies that switches between Danish and English at the drop of a hat, which is, if my Danish relatives are anything to go by, representative of how it goes in Denmark.

What makes the picture work so well is it’s grounded in drama. Characters are dealing with real life shit and not everything is played broadly for laughs. You care about them all. Dyrholm is especially appealing, showing how blinded she is by a loyalty to her philandering husband, but someone with so much strength, too.

If there is a criticism I could level it’s in the soundtrack, which was a bit too intrusive for my taste, but I get that there is a tradition. And I can forgive a lot when all the rest of it is as good as this. 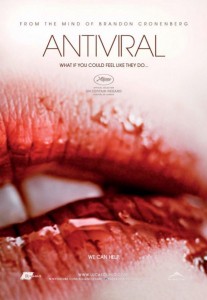 I can see why people are so taken with Brandon Cronenberg’s Antiviral. Good buzz from Cannes, and I heard yesterday that it tied with Jason Buxton’s Blackbird as Best Canadian First Feature at the 2012 Toronto International Film Festival. You can see his father’s influence in the relentless body horror, making for a skin-crawling cinematic experience familiar to those who’ve seen David’s Rabid, Videodrome or The Fly.

Caleb Landry Jones plays Syd March, a guy who wears nothing but pressed white shirts, black ties and black coats. He works at a clinic that sells viral infections to people paying to get sick. The viruses are harvested from celebrities looking to make a buck when they’re under the weather. In this uncomfortably believable world, people are so obsessed with celebs they’re willing to purchase their germs in order to feel closer to them. Under contract with this particular clinic is Hannah Geist (Sarah Gadon), a beautiful young… actor? Not sure what she does. Doesn’t matter. She’s famous. Syd is also making some extra cash by infecting himself with the viruses to sneak them out of work, and later collecting the bug with a machine at home in order to sell to a black market vendor, Arvid (the always amazing Toronto actor Joe Pingue). The viruses are copy-protected, but Syd’s machine helps him overwrite that security. It’s when he catches a possibly fatal, genetically engineered bug from Hannah, he starts running all over town trying to find a way to cure himself before it’s too late.

I loved the way this world is engineered. The observations of a tabloid culture eating itself don’t seem so implausible. And the little details are marvelous, encapsulated by Syd’s TV-obsessed landlady, and how when everyone talks about a celebrity scandal, they use the word “ordeal.” The production details remind me of THX-1138, Gattaca, Primer and a host of other clever science fiction films of recent years.

If I had a problem with it, it’s that Syd is so loathsome. Jones has some of the reptilian quality of Jonathan Rhys Meyers, peculiarly believable as someone missing key pieces of human morality. But while he’s also vulnerable to the appeal of celebrity, he isn’t honest with himself or anyone else. It’s hard to tell if he has any interior monologue at all. Plus, he spends the entire 108 minutes of the film getting increasingly ill, suffering to the point of spewing blood. Not fun to spend time with this guy, and it’s nearly impossible to feel for him, even when at one moment he could be a borderline-hilarious Kafka-esque character, and at another he seems to channel a hardboiled noir detective, repeatedly getting his head handed to him as he gets closer to the truth of the world he lives in.

All this said, even as I felt like I needed to bleach my brain and eyes coming out of Park Lane’s Cinema 8, I was impressed by the vision. Oh, and producer Niv Fichman and star Caleb Landry Jones were both in attendance. Jones seems to really like this town of ours.

Tuesday night is crammed with pictures I want to see: Searching for Sugarman, Revolution, Love (Amour) and Smashed. Sacrifices must be made.