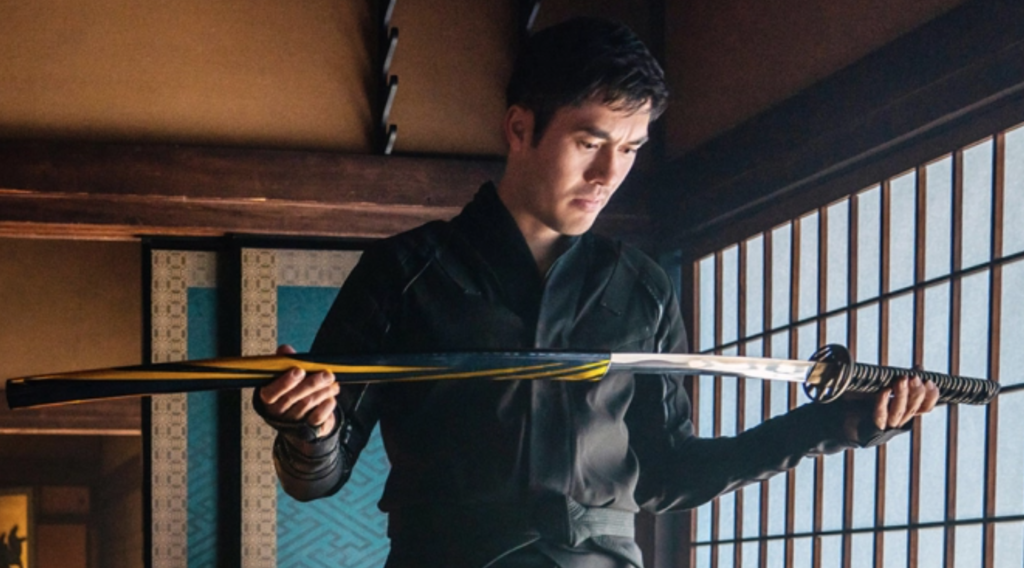 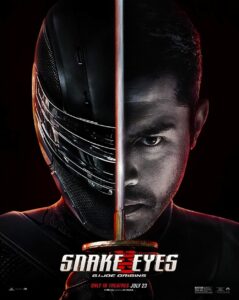 This blockbuster floundered last year at the pandemic box office but is now available on demand, which is where I caught up with it.

Here’s where I have to own a small weak spot for certain objectively mediocre or obviously flawed movies. They get graded on a curve if I can say with some confidence my 10-year-old self would’ve enjoyed it. 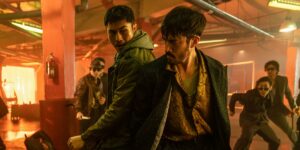 Welcome to the quintessential My 10-Year-Old Self Would Have Loved This Movie movie. I guess that makes a certain sense given it’s a spin-off of a franchise adapted from a line of action figures — a few of which I played with.

No sweat if you haven’t seen or don’t remember the other GI Joe movies, this one is reasonably self-contained. (I confess I think I saw one of them, but it was so unmemorable I can’t recall a single thing about it beyond that Channing Tatum starred.) 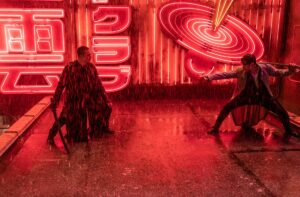 Here we get the backstory of key GI Joe mystery man-in-black, Snake Eyes (Henry Golding). As a child his father was murdered by a bad man whose identity he never knew. Naturally, a thirst for revenge drives him.

Twenty years later he crosses paths with another bad man, Yakuza honcho Kenta (Takehiro Hira), who promises answers if SE will swear allegiance to him. Kenta gives Mr Eyes the chance to show his loyalty by killing an enemy, Tommy (Andrew Koji), which SE can’t do. Instead, he saves Tommy’s life. 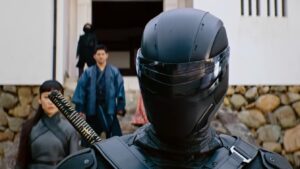 It turns out Tommy is the scion of another Japanese clan, the Arashikage, that also has serious ideas about loyalty and commitment. Tommy recruits Snake Eyes into service, but he must take a three part test to prove his loyalty — and it isn’t multiple choice. While in training with the clan he gets friendly with Tommy’s head of security, Akiko (Haruka Abe), but Snake’s got, let’s say, hidden motivations for what he’s doing. 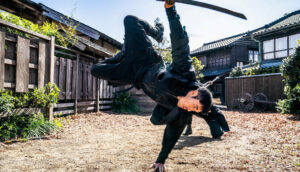 And that’s what lifts this otherwise fairly rote actioner to something worth sticking with. There’s an espionage element that pushes it toward Mission: Impossible territory even though this is the kind of movie that has room for monstrous, magical snakes and flaming gems of supernatural power, as well as gangsters, international terrorists, and hoards of ninja. It’s also not a bad-looking picture — the production design leans into its affection for Ridley Scott and what makes movies like this tick — a fetish for both high tech and antique weaponry. 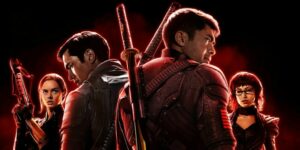 What works somewhat less well is much of the rest of it, starting with the direction. Schwentke has made a career of forgettable mid-budget features and wouldn’t know a coherent action sequence if it sat on his face.

Golding is a charismatic leading man and likeable enough but doesn’t do a tortured soul with any particular conviction — I don’t sense much of an internal life. If this was a stealth audition for James Bond, I’d hope if he lands it they choose a more Roger Moore-esque direction with the next era of the franchise — Henry is more of a lover than a fighter, as he proved in Last Christmas and Crazy Rich Asians. He can do more with a raised eyebrow than with his fists. 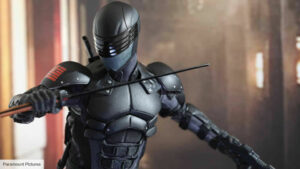 That said, any romantic heat between him and Haruka Abe is a non-starter, despite the suggestion that she falls in love with him — his bromance with Andrew Koji delivers more heat. 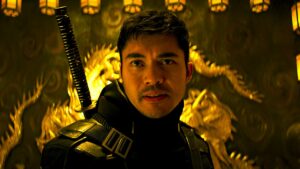 So, not too many surprises await you — certainly nobody will be shocked when other characters from the line of Hasbro toys appear — but if you’re in tune with your inner 10-year-old the way I am you just might just want to gamble on Snake Eyes for an undemanding Saturday morning or afternoon.