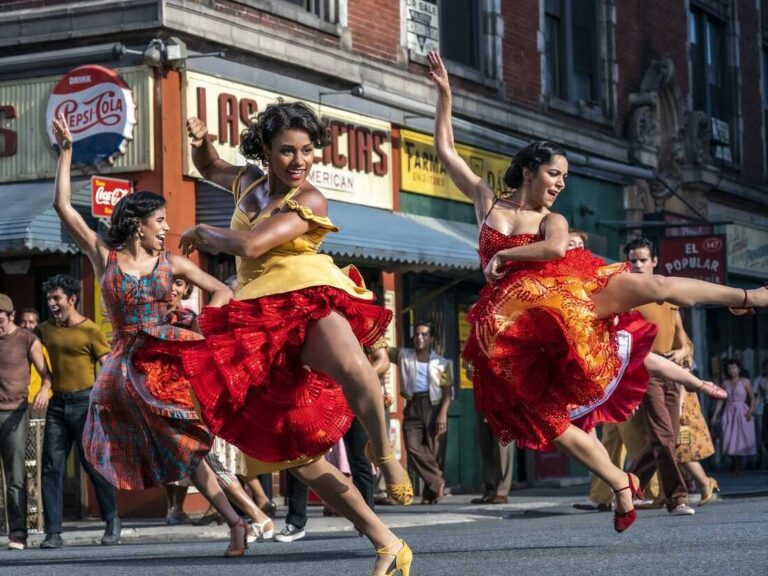 Directed by Steven Spielberg | Written by Tony Kushner, from the stage play and book by Arthur Laurents | 156 min | In Cinemas 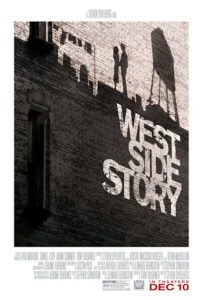 Why remake a beloved musical — even if you go back to the original stage show? It seems a wildly counter-intuitive move, doomed to fail because those who loved the original, which is most people, would be critical of changes whether they’re an objective improvement or not. There’s a chance to find a new audience, but with material popular with boomers?

Me, I don’t have a dog in this fight. Before this year, which has seen at least two stellar musical adaptations already — this one and this one — I’ve not been a huge fan of the form. I might be getting there, and with this extraordinary effort, Spielberg proves with his first musical he’s still got arrows in his filmmaking quiver — at 75 he’s showing us things we’ve never seen from him before. 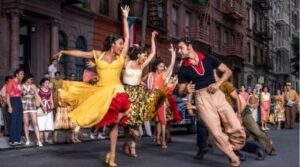 I can see the appeal of the original 1961 cinematic version: The bravura opening, the terrific location cinematography, those ageless Leonard Bernstein and Stephen Sondheim songs, like “America”, “Tonight”, “Gee Officer Krupke”, and “Somewhere.”

There’s even the effort to say something true about the American immigrant experience and depravation in the inner city, some of which has dated — though not as much as casting Natalie Wood as a Puerto Rican teenager. The central romance is its weakest element, the wet teen take on Romeo and Juliet probably seemed tired even then. Much more fun is the supporting cast, like Rita Moreno and Russ Tamblyn, and those still-astonishing dance numbers choreographed by Jerome Robbins. 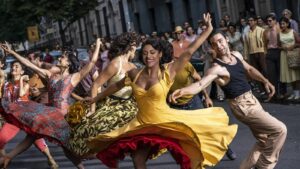 The first thing Spielberg does is make explicit the theme of 1950s urban renewal and slum clearing, when so many cities across North America — including where I’m writing from, Halifax, Nova Scotia — instituted the wildly optimistic but deeply flawed idea of pulling down old buildings and replacing them. While people thought this would improve the lives of the people living in those neighbourhoods, what it did was destroy and displace whole communities of people who couldn’t afford to live in the newer, more cheaply made constructions. 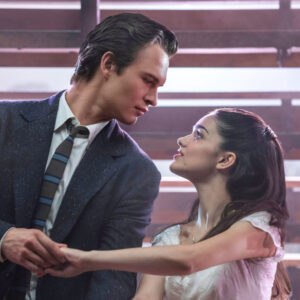 The characters in this version of West Side Story are witnesses to this destruction all around them and have nowhere to go. The Jets, the white gang of toughs, and the Sharks, the Puerto Ricans, are both seeing their turf taken over — as Lieutenant Schrank (Corey Stoll) explains to the gangs early on — but not by the their enemies, by wrong-headed progress. Their frustration is clear in the violent set-to — featuring a nail through an earlobe — that the cops break up.

Spielberg and his DP Janusz Kaminski have aped the look of the era in the film’s its palate and Life Magazine-styled visuals while managing to find entirely new ways of shooting the performers. I thought Dune was going to get the award for the most beautiful and epic cinematic experience of 2021, but West Side Story might take it by a narrow lens. 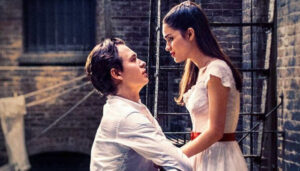 Then there’s the talent and achievement of the singers and dancers, unimpeachable across the board. “America” is even more jubilant this time out, and “Tonight” performed on the fire escape is magic. Full marks especially to Rachel Zegler as the new Maria in her first feature role, to the incendiary Ariana DeBose as Anita, and Mike Faist as the wiry, doomed Riff. Ansel Elgort is a fine singer and mover, though maybe not quite at the rafters-high standard of his cast mates. Moreno returns in a new role as Valentina, replacing Doc as the owner of the drug store. 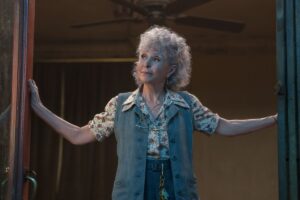 A few of Spielberg’s creative decisions made me scratch my head, including the way Spielberg stages “Gee Officer Krupke,” making it feel a lot more stagey than the ’61 version, and also reducing the role of tomboy/trans character Anybodys (Iris Menas) from the original. However, in the scenes featuring the Latinx cast, much of the dialogue is unsubtitled Spanish, a gutsy choice to be more inclusive to audiences in that community while the choice of who gets to sing “Somewhere” provides an even more melancholy swing at arguably the greatest song in the show. 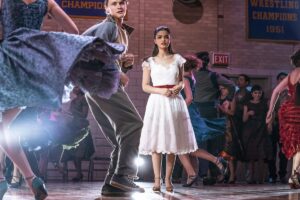 The central romance is still a little damp — hard to make the teen absolutism of Romeo and Juliet anything but awkwardly naive in the 21st Century — but otherwise a lot of Spielberg and Kushner’s changes to the material won’t likely offend the purists. They work to make this version feel fresher with an especially strong dose of sociopolitical relevance — more than 60 years later people are still fighting over their little piece of turf. Even with the heaviness in the message, the musical’s an unalloyed joy.