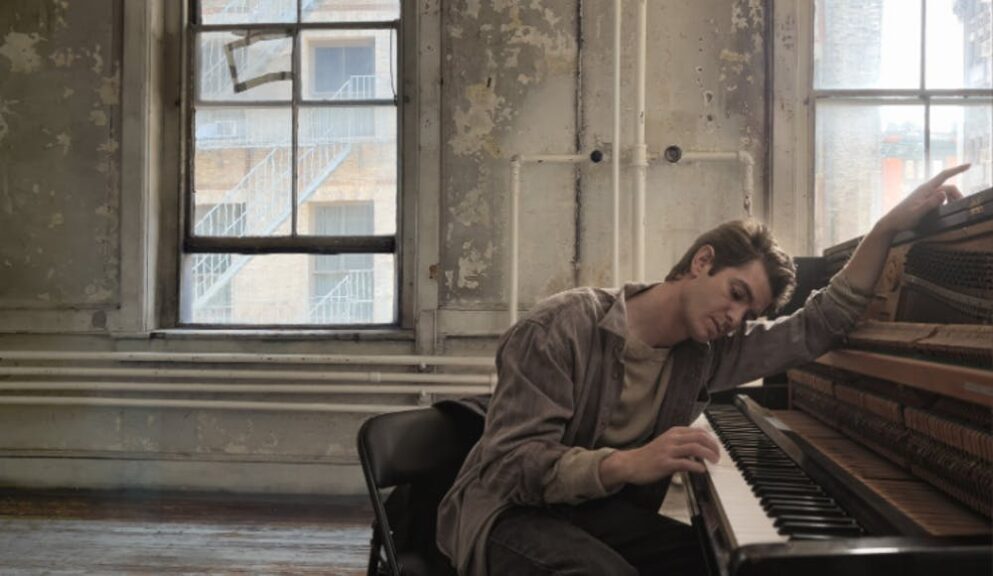 Directed by Lin-Manuel Miranda | Written by Steven Levenson, based on the musical by Jonathan Larson | 115 min | Netflix 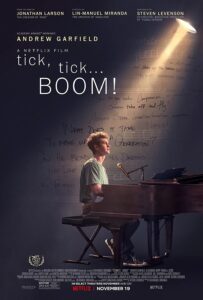 Jonathan Larson is best known as the creator of Rent, the Pulitzer Prize- and Tony Award-winning ’90s rock musical. Tragically, he died suddenly in 1996 just as Rent was premiering off-Broadway. Before Rent he created tick,tick… BOOM!, a semi-autobiographical musical about he and his friends’ struggles in the early 1990s trying to make a name for themselves in the world of musical theatre. He workshopped and performed it before he turned his attention to Rent, and after Larson’s death the play was revived. It ended up inspiring Lin-Manuel Miranda, creator of Hamilton and In The Heights. It makes all kinds of sense that Miranda would choose this material to be his debut as a feature film director.

It’s all very meta — a musical about a writer struggling to write a musical, directed by someone who felt inspired by the original creator to revolutionize the form themselves. Feels appropriate, even for someone as accomplished as Miranda: I assume he’s struggled to create at some point in his life, had moments where he doubted his path forward — hasn’t everyone who’s put their work out in the world? 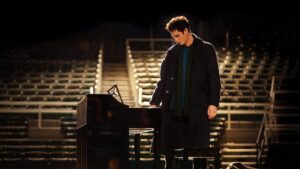 tick, tick…BOOM! isn’t actually, specifically about the musical Larson’s trying to make  — though I was curious about his dystopic tale set in a strange future where the masses watch the wealthy few on TV. It’s actually about the passion and sacrifices required to be an artist.

Jon (Andrew Garfield) lives in a crappy New York apartment while he works as a waiter in a greasy spoon diner and spends his every extra moment writing music and lyrics. His girlfriend, Susan (Alexandra Shipp), a dancer, wants to take a job outside the city that’ll give her more options. She wants Jon’s input on this big decision, but he keeps avoiding that talk. Jon’s best friend, Michael (Robin de Jesus), who moved to New York with him to work in theatre has taken a job in advertising. It gives him security and even luxury, but he’s turned his back on that dream that he and Jon shared, the one that drove them to the big city. Jon sees the appeal in the compromise, especially when his confidence in his work is failing. All this is told against the backdrop of the AIDS crisis in New York.

Jon’s about to turn 30 — he’s been working on this big musical for years, but hasn’t gotten anywhere — and he needs to write a key song  for his show before it’s presented.

Miranda deftly jumps between musical scenes in Jon’s life and he and his collaborators (including Vanessa Hudgens) presenting tick, tick, BOOM! in workshop form on stage in front of an audience.  It’s a clever conceit — when Miranda has a way to illustrate the material in the drama proper, he does, and when he wants to strip it back to the core, he flips to the stage presentation. Occasionally he does it to provide welcome tension and release, for example Jon and Susan finally discussing their future in a tearful apartment scene intercut with an onstage cheery rave-up about miscommunication. 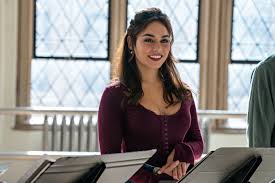 What’s maybe most impressive is how Miranda manages tone. There’s plenty of serious moments — even tearful ones — but this is largely about the joy of inspiration, the joy of having the opportunity to share your vision with the world, and plainly the joy of theatre, even while acknowledging all the real-life pain that goes along with making it happen.

The songs are terrific, with a few stellar day players to help deliver a little glamour: One the best moments is a number called “Sunday,” an ode to mundanity and brunch performed in the diner, featuring, amongst others, Bernadette Peters, Bebe Neuwirth, Joel Grey, and Hamilton‘s Renée Elise Goldsberry and Phillipa Soo. We also get Tariq Trotter aka The Roots’ Black Thought rapping, and Bradley Whitford convincing as the late, great Stephen Sondheim. 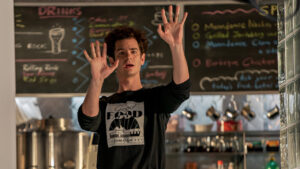 Finally, a nod of the critical hat to Andrew Garfield. A self-admitted non-singing actor, he’s lifted his game to help achieve something genuinely moving, and his vocal performance is stellar.