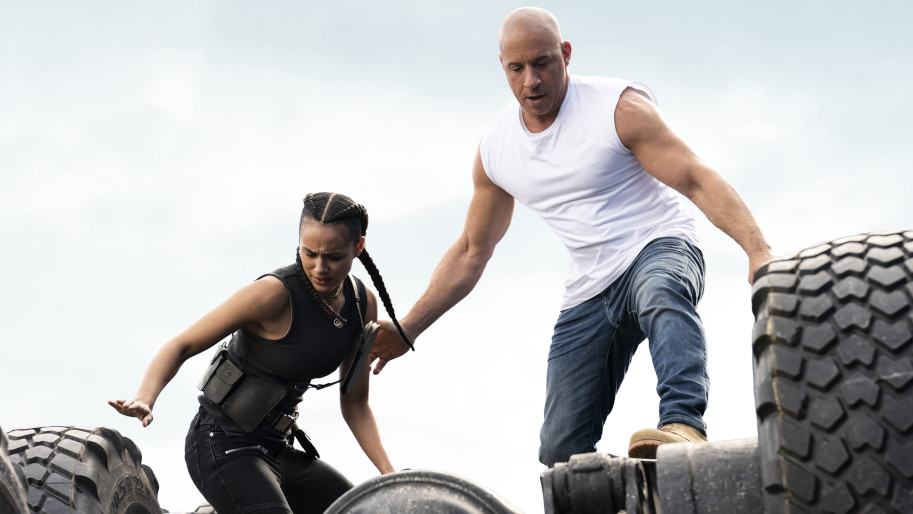 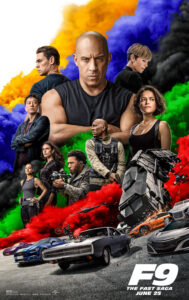 There was every sign this would be a revvin’ good time at the movies. The return of Justin Lin to the drivers’ seat, the man who helmed many of the series’ best entries: Fast Five, Fast & Furious 6, The Fast and the Furious: Tokyo Drift, and Fast & Furious , arranged in a descending order of quality.

Speaking of descending quality, that’s what’s been happening with this series from the high point of Lin’s Five and Six, James Wan’s fun but increasingly baggy Furious 7, the tech-distracted F Gary Gray picture Fate Of The Furious, and the pretty much forgettable Johnson/Statham spin-off, Hobbs & Shaw.

Now we have the ninth (perhaps 10th, depending if you count that spin-off)  and all the air’s gone out of the tires. The transmission’s shot.

In this overlong, terrible movie, we get about 15 minutes of genuine entertainment when it leans into the comedy talents of its cast and embraces the silliness that’s been there all along, but there’s a difference between ridiculous and just plain stupid. 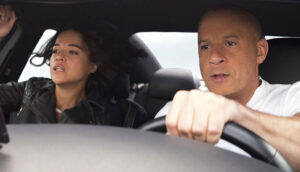 With Dwayne “The Rock” Johnson famously having fallen out with this franchise’s main man, Vin Diesel, there’s no sign of the former wrestler this time. His oiled pecs, arched eyebrows, and playful understanding of the kind of movies he’s making are deeply missed.

We find Diesel’s Dominic Toretto in semi-retirement off-grid on a farm, raising a child with Letty (Michelle Rodriguez). But, naturally, there’s a new mission, a tech macguffin that needs to be secured from other, diabolical interests. Dom’s reluctant at first, but when he discovers his long lost gone-bad brother, Jakob (John Cena), is involved, that brings him in. Cue a collection of flashbacks to 1989 Dom and Jake, as part of their dad’s stock car pit crew the day dad pinwheeled into a fiery death, and we find out Jake might’ve been responsible. 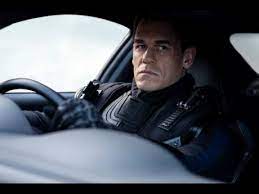 In the present day, off we go with the current pit crew  — returning support from Ludacris, Tyrese Gibson, and Nathalie Emmanuel — to the Mission: Impossible-worthy locations, Thailand, Edinburgh, and Tbilisi, fresh streets for the F&F brand of vehicular mayhem. 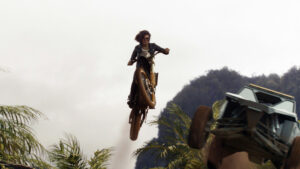 It doesn’t really matter what the gadget they’re looking for does, but rest assured it will end civilization as we know it if it falls into the wrong hands, people like Jakob and his “spoiled, rich kid”  financier, Otto (Thue Ersted Rasmussen). Yes, Helen Mirren appears, far too briefly, and Charlize Theron is back as Cypher, the villain from the last movie, this time sporting an ill-advised page boy ‘do. 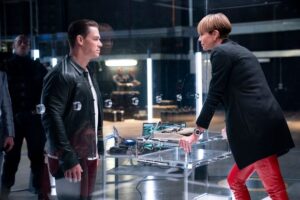 Also back is Han (Sung Kang), who died awhile back, but has been resurrected due to the magic of the movies and the help of spymaster Mr Nobody (Kurt Russell). Though Han gets plenty of love upon resurfacing, he barely registers as a character before he’s plugged into another car-related heist sequence. 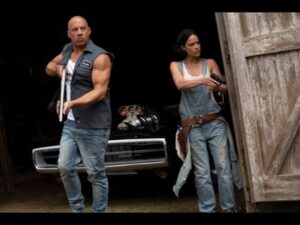 Also back is Dom’s sister, Mia (Jordana Brewster), but once again, she makes next to no impact onscreen. F9 isn’t a movie that’s interested in providing any opportunity for growth in its characters, with the possible exception of Roman (Gibson), who has started to believe he’s been given the gift of invulnerability.  It’s a reasonable conclusion, what with all scrapes this crew has gotten through without even a scratch over the course of these movies. It seems a lot like famous last words for Roman, not that being dead is any kind of permanent situation in the F&F universe.  Even Paul Walker — who died in real life in a car crash in 2013 — he’s presumed to be still around, though we don’t get to see him digitally recreated or anything.

The dialogue is awful. You’d think there’s no way characters can pop out a cliche in almost every scene, but somehow they achieve it in these painfully soapy exchanges. And yes, as per usual expect frequent, on-the-nose odes to the value of family, with Diesel especially grinding those gears. Family is important unless it’s Johnson’s missing character, who doesn’t even earn a mention or an invite to that inevitable backyard barbecue.

Here’s the thing: yes, there are a few eye-popping, physics-defying stunt driving sequences, if way too CGI heavy, but nothing that tops any of what we’ve seen before. In a couple of cases, they’re even, gulp, dull. 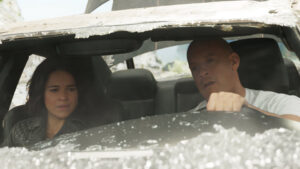 That’s the thing with these movies — they have set a pretty high bar for incredible stunts, but the filmmakers here don’t get anywhere near clearing that bar this time out. Human beings fall from great heights and aren’t crushed to death, but this isn’t a Jackie Chan picture, not even a John Wick, both of which provide a level of gracefully choreographed verisimilitude that this picture doesn’t get close to. This is a choppily edited cartoon when it comes to the combat sequences, hand-to-hand or otherwise.

They’ve added the novelty of uber-powerful magnets in trucks and cars to a few of these chase segments, but every time they use them, the attraction is selective. Some metal items are deeply compelled, while others are not, usually in the most convenient way.

There’s also the question of this team’s resources. How does Dom locate a different customized 1970s Charger or a more modern muscle car in every country he visits?  It’s not like the plot is even trying to offer a semi-plausible explanation any more, nor are they fetishizing the vehicles like they once did. Too busy hurrying on to the next CGI-brushed set-piece to rev their motors, or bother finding an impressive new supercar to show off. 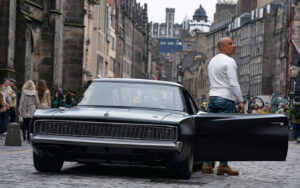 I’m sure many reading this will say, “Expecting this franchise to make sense or steer away from the ridiculous is like being mad at the sky for being blue.” I hear that argument when two of our heroes ride a 1990s Pontiac into space wearing diving helmets. Fair enough.

But, I’m also here to tell you, there’ve been plenty of previous entries in this franchise that have successfully balanced the silly with the fun much better than this one. F9 is a lemon — easily the worst since 2 Fast 2 Furious.