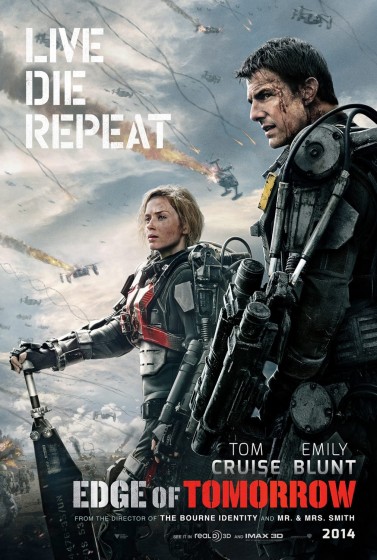 Directed by Doug Liman | Written by Christopher McQuarrie, and Jez and John-Henry Butterworth, adapting Hiroshi Sakurazaka’s novel All You Need Is Kill.

Things I’ve learned about the source material for Edge of Tomorrow since I experienced — no, was assaulted by — the film last night at the Bayer’s Lake IMAX:

Author Sakurazaka named his female lead Rita, which is the name of Andie MacDowell’s character in the 1993 comedy classic Groundhog Day. That creative debt is explicit. And he also said he was inspired by video games when he wrote the story, the way a player can, through endless reanimations, master and complete the game.

Edge of Tomorrow is the most like a First-Person Shooter of any movie I’ve ever seen. That’s not a compliment. It has some humour, some smarts and Emily Blunt on its side, but it’s an otherwise noisy, factory-tooled blockbuster that didn’t leave me feeling much of anything.

It starts well: Tom Cruise plays a bit of a snake-oil salesman, Will Cage, a public relations man for the US military. It’s great to see the guy tap into his casual Jerry Maguire-esque charm for a change. Cage is promoting fancy new exoskeletons the grunts have been using in Europe to fight off an alien hoard called mimics.  The Matrix stymied Hollywood production designers’ imaginations from conceiving warlike aliens without tentacles, and here the many-legged monster thing rears its ugly and tired head once again. The creature effects are completely derivative, and the CGI, with the exception of one scene where Cage’s face gets burned off, just draws attention to its unreality.

Cage is drawn into a D-Day-esque assault on the mimic-laden French beaches—and it’s no accident this film was released on June 6. (I don’t know whether to be impressed by Hollywood marketing or repulsed by its cunning opportunism.) And it’s this day he has to relive again and again. The clever part of the script lies here: the plot and editing convolutions that explain the stitch in time, and how Emily Blunt’s Rita — the most decorated soldier in the Allied Forces — becomes part of the temporal rift.

I liked Blunt’s presence in the film. For awhile, Rita’s given a chance to be the hero and instructor to Cruise’s newbie re: the functioning of  the machine gun-laden suit, but it’s not long before friendly Jerry dissolves, replaced by the template of Cruise-The-Hotshot, steamrolling everything in its path. The repeating FPS reanimations and Rita’s training allow him time to become the bionic killing machine we all knew he would eventually be.

Even with the direct debt to Groundhog Day, The Matrix-esque squidio monsters, Saving Private Ryan‘s opening sequence, and any number of video games, the film’s biggest theft is from Jim Cameron’s Aliens. The weaponry fetish, the multiethnic military personnel enrobed in high-tech machinery, even the dialogue — Cruise actually yells “Punch it!” at one moment — is flagrantly ripped off from Cameron’s 1986 film. The jewel in this heist is the casting of Bill Paxton, playing an amalgam of Hudson, his character from Aliens, and Chet from Weird Science. Generally, I enjoy a little self-aware nod to classics that inspire, but in this case it feels like a blatant Frankenstein assemblage of other, better movies.

And when Cage finally gets all war-hardened and cynical, that’s when the Edge of Tomorrow becomes just another generic and rampaging action juggernaut with a painfully predictable third act. And that’s when I started wondering when the movie might free me from the repetitious sound and image fusillade, and just show the big boss to kill along with the inevitable final twist.

I acknowledge there is some entertainment value here, especially for genre fans. But, if you’re looking for a time travel story to make you feel something other than queasy, I’d recommend any number of Star Trek episodes and Duncan Jones’ Source Code before you let yourself get flattened by this beast.