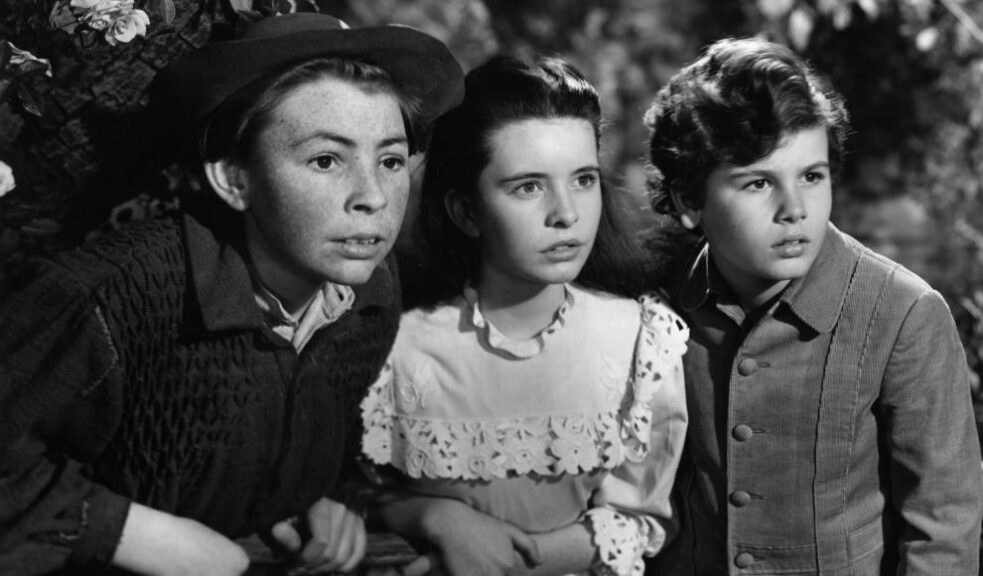 Having binged the various versions of Little Women, I discovered the many adaptations of another beloved book: Frances Hodgson Burnett’s The Secret Garden. Not all the versions are available — apparently the first feature version was released in 1919  but it’s been lost in time.

Here are reviews of the films I was able to find. They’re generally available on digital services. 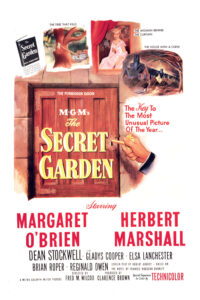 Child and future adult star Margaret O’Brien (who’s still working today in her 80s) is Mary Lennox in this MGM adaptation  — interestingly, she starred as Beth in Little Women the same year.

Mary’s a spoiled child of a wealthy colonial family in India who’s orphaned when her parents die of cholera. Raised by servants, mostly, she expects everyone to do everything for her. She’s shipped off to the sprawling Yorkshire estate, Misselthwaite Manor, owned by her uncle, one Mr Craven (Herbert Marshall) — it’s a dark, gothic pile, where the housekeeper, Mrs Medlock (Gladys Cooper), is unpleasant and housemaid Martha (Elsa Lanchester), just laughs at Mary’s problems.

As Mary starts exploring the grounds she meets a neighbourhood boy, Dickon (Brian Roper), who has an almost supernatural connection to animals — credit to the robin, raven, fox, and lamb wranglers. Together they find their way into the property’s very secret garden, locked up 10 years earlier by Mr Craven when his wife was killed there accidentally. Craven also has a son, Colin (Dean Stockwell), who’s bedridden from a debilitating illness and is as spoiled and miserable as Mary. The garden ends up serving as a symbol of hope and healing for them all. 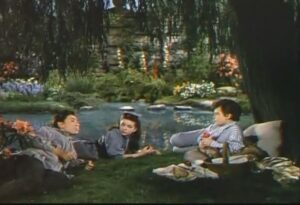 This is thematically rich material. It wrestles with issues of class — basically saying that status alone isn’t enough to make you happy — as well as with grief and loss, hope, redemption, and rehabilitation.

The film’s in black and white, but when the garden blooms, so does the Technicolor. It might seem a bit on-the-nose now, but as far as stories about the resuscitative power of nature it’s got a lot to recommend it.

Interesting that we don’t actually see much of the children pruning and restoring the garden, and that would’ve been hard work. Maybe Mary made Dickon do it. Maybe they’ll get their hands dirty in the next version. 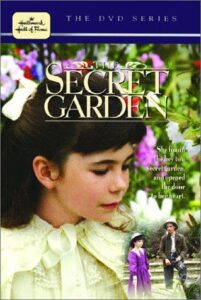 Downton Abbey fans will have something to enjoy in this TV adaptation from Hallmark. They’ll immediately recognize Misselthwaite Manor as the Downton location, Highclere Castle, with scenes shot both inside and out that will seem awfully familiar. This version is told in hindsight, as adult Mary Lennox (Irina Brook) returns to the grounds of the manor, looking for the key to the titular garden behind a loose brick.

We flash back to India, where we actually meet the ailing parents of young Mary (Gennie James, actually from Texas and her American accent prevalent throughout) just before they expire, horribly. Mary’s just as whiny but seems more curious about her new home this time out. Mrs Medlock (Billie Whitelaw) is a lot more patient and pleasant. 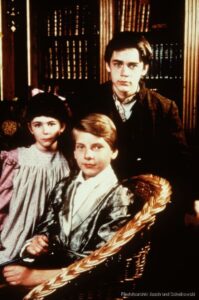 The presence of veterans like Whitelaw, Michael Hordern,  Derek Jacobi, Julian Glover, and a young Colin Firth bring a lot of class to this version, but you’ll have to suffer through all the unfortunate glaze, terrible dialogue, and low-budget clunk of any 1980s Hallmark TV production, including stock footage of robins and a truly awful flute-and-strings score. We do, however, see the children doing actual work bringing the secret garden back to life. 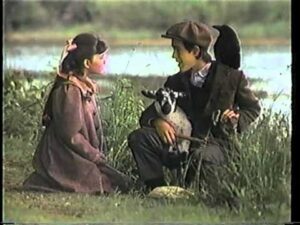 When we come around to the framing device in the “present”, it’s clearly wartime. It allows for both a character’s tragic outcome and a marriage proposal between two others.

A sequel set at Misselthwaite Manor after the Second World War is available on Amazon Prime, entitled Back To The Secret Garden (2000). It stars Joan Plowright as an older Martha, who’s been entrusted with the manor — now an orphanage — by the grown Mary (Cherie Lunghi).  Mary recruits a garden-loving American orphan (Camilla Belle) to come to England. Check it out if you must, but it’s inessential. The garden looks like a TV set rather than a child’s fantasy eden. 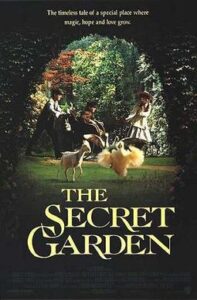 OK, now we’re getting somewhere. Holland is a filmmaker with an impressive body of work in features and on television, and she’s got the legendary cinematographer, Roger Deakins, shooting her film, which is immediately apparent. This is a lovely looking production.

When we meet Mary here she’s being tended by the servants in India, the ones she was always going on about in the earlier versions. Mary is played by Kate Maberly, who doesn’t get as many lines as her predecessors, but communicates more with her dark eyes and jaunty knitted hat.

In this edition her parents are killed off by an earthquake rather than disease. We also discover that Mary’s mother and Colin’s mother were twins. There are plenty more secrets and mysteries here, especially in this mansion, which has a terrific gothic presence, as does Maggie Smith as Mrs Medlock, who’s a much more controlling, unreasonable, and fragile antagonist this time out. But, she can’t stymie the magic between the kids who find a certain freedom together with their shared secrets. 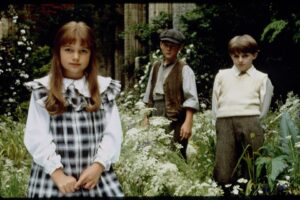 The wonder extends into the garden where the children are surrounded by the juvenile wild creatures, poking their ears and snouts into the edges of the frame. Colin (Heydon Prowse) is revived by wonders of nature much earlier on in the story this time, and gets to spend more time with Mary and Dickon (Andrew Knott), making for the suggestion of a love triangle.

The only debit here is the otherwise excellent John Lynch, who as the Uncle feels like he’s strayed from some theatrical melodrama, and a character moment for Mary in the final act that doesn’t make much sense. Also, any real thought about class and privilege, a clear subtext of the 1949 version, has been abandoned. 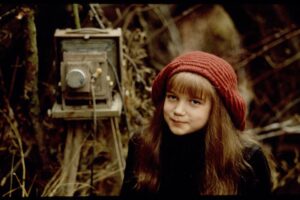 That said, if you’re only going to see one of these, this one is maybe the most grounded in realism. It’s good, but for my money the best is yet to come. (Just skip ahead of the next one.) 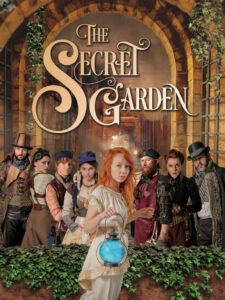 Credit to the filmmakers for the version that takes the most creative license with the source material, planting it in a Victorian steampunk fantasy. Too bad, beyond the concept, the rest of it is so shabby.

Mary Lennox (Glennellen Anderson, the eldest Mary we’ve seen) is very much the privileged, demanding sort we’ve grown accustomed to, though more irritating for being older. She’s visiting her uncle’s dilapidated factory, Misselthwaite — a rusted jungle of pipes and doohickeys that’s gone to seed since the death of aunt Lily. Mary’s to wait on her parents, but they’re reported lost on an airship over the Arabian sea.

Ben Weatherstaff (Mark Ashworth, the one authentic accent in the place) introduces Mary to the idea that “we make no distinction” here at Misselthwaite between mechanical and living creatures — an interesting added element to the story, while the Doctor (Sacha A. Dzuba), now a Craven relative, is the real villain here. 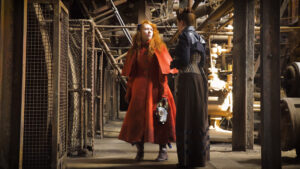 A drone (aka Remotely Operated Binary Industrial Node or R.O.B.I.N) lures Mary to the entrance to the titular garden — the nickname of Lily Craven’s workshop — which is just another corridor in a factory full of rooms. When Mary and Dickon (Max River) find their way into said garden, it’s wildly unimpressive — another casualty of the budget, I expect. And when Colin (Paden Garrett Anderson) finally shows up, he has a secret that throws a wrench into the whole story.

Aside from the ornate costumes, props, and preponderance of Edison bulbs, this feels very much like a community theatre project shot on digital video in a studio in Atlanta. Which is fine — it’s not wanting for ambition in other respects — but the awful score and other syrupy touches scuppers a lot of goodwill. Thematically the original was about the healing power of nature, but this edition those notes are muddled or absent altogether. 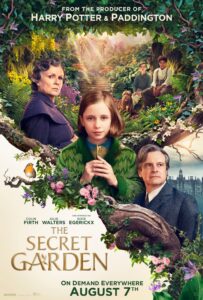 Here’s a suitably expressionistic and visually charged version — a real touch of Guillermo Del Toro’s Pan’s Labyrinth in its look — and in many ways it’s a match of both the the 1949 and 1993 editions, with an added narrative complexity making it the best of the bunch.

The story starts with Mary (Dixie Egerickx) orphaned in 1947 by cholera. This Mary is just as spoiled as the others, though more prone to escape into fantasy stories of her own concoction and flashbacks to sunnier times in India. We also get to see moments of happiness when Mary’s mother and her twin sister enjoyed the Misselthwaite Manor, back when there was light and love in the house and before it was so gloomy and couched in grief. 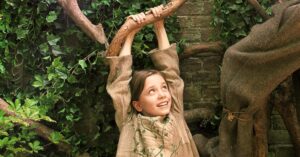 Interestingly, in this version Mary gets friendly with a local mutt and meets her bedridden cousin Colin (Edan Hayhurst) before she meets Dickon (Amir Wilson), even before she gets access to the titular garden. Character-investment-wise, that seems like a good idea. The tragedy-stricken Uncle Craven (Colin Firth in one of these for a second time) is less intimidating and more sad, and perhaps a little less present. Groundskeeper Ben Weatherstaff is entirely absent in this version.

Mary’s real enemy here is loneliness. Mrs Medlock (Julie Walters) is more distant and more bigoted than the other housekeepers, and Martha (Isis Davis) is much less a Yorkshire caricature. 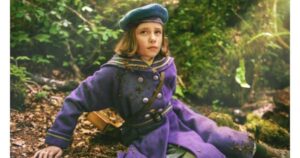 The garden itself is a magical place and gorgeously shot — a much larger, wilder, and more jungle-like a place than the manicured Victorian vision we’ve seen before. The robin is unconvincing CGI, unfortunately, but where the CGI mimics and magically speeds up springtime growth, it’s actually lovely stuff. 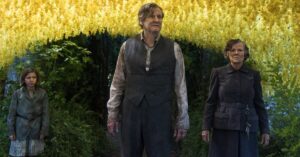 What works best is the relationship between the children. Each is trying to recover from trauma visited upon them by the older generation but together they help each other heal. With that and the magical properties of the garden, this version finally gets the balance right between the whimsy of a child’s perceptions and the hard realities of adult disappointment. 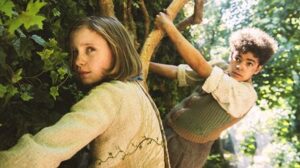 A late-arriving fiery shift in the narrative  from previous versions — borrowed from Rebecca, actually — helps the theme of letting go of the past, of cauterizing wounds, to predominate.

Nice that the last one of these turns out to be so delightful.