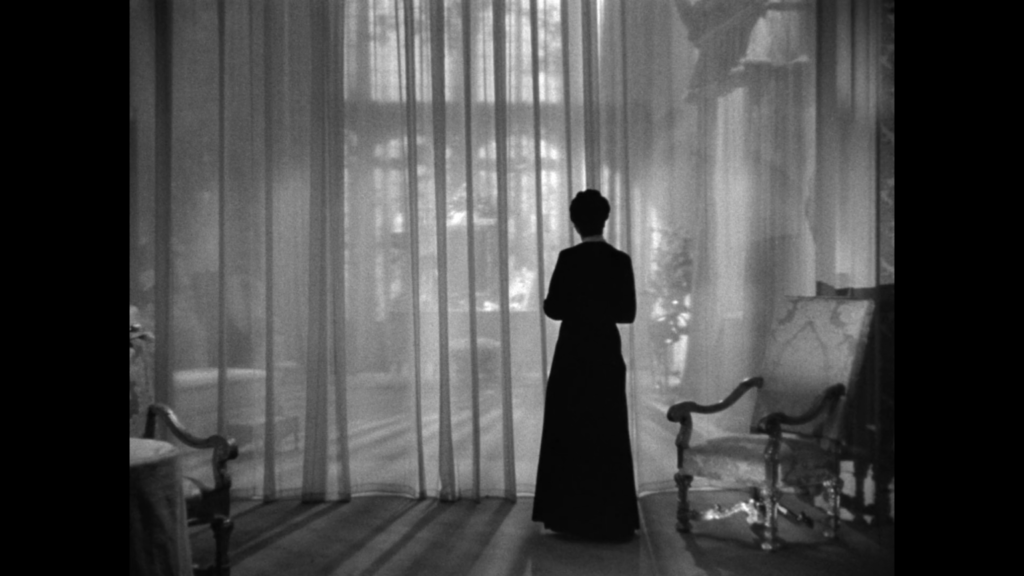 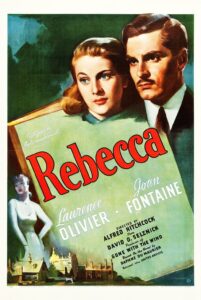 The Hitchcock original remained unseen by me until recently — all I knew was it was his first Hollywood picture, and it won Best Picture over films like The Grapes Of Wrath, The Great Dictator, and The Philadelphia Story, all of which are generally considered superior to this old-fashioned melodrama. 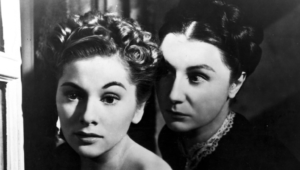 The basic story is this: A kind but insecure young woman (Joan Fontaine) meets an aristocrat, Maxim de Winter (Laurence Olivier), in Monte Carlo while she’s the personal companion of an older lady, Mrs Van Hopper (Florence Bates). If Fontaine’s character has a first name  it’s not clear — she’s only credited as Mrs de Winter. Yes, they get married, despite the fact Maxim is still grieving the death of his first wife, Rebecca. 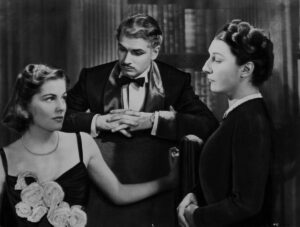 Off they go to his sprawling British estate, Manderley, where the new Mrs de Winter couldn’t feel more out of place, constantly comparing herself to the spirit of the first wife. It doesn’t help that the stern, scary head housekeeper, Mrs Danvers (Judith Anderson), adored Rebecca, and is more than a little unwelcoming. Then there’s the snaky Jack Favell (George Sanders) hanging around.

This first half of the feature feels even more anachronistic due to Fontaine’s character being such a total drip. With no personality of her own, her raison d’etre is making her much older husband happy. But, somewhere along the way, as dark secrets are revealed, she finds a little steel in her spine, and the film gets a lot more interesting with suggestions of malfeasance. 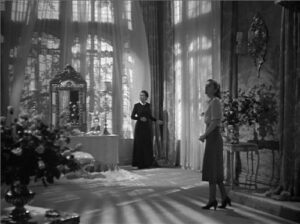 The master filmmaker’s skills with plot are unerring, and Rebecca remains an entertaining enough example of his storytelling gift, but the critics were also right — one of those other movies would’ve made a more timeless Best Picture, something that feels less like a relic. 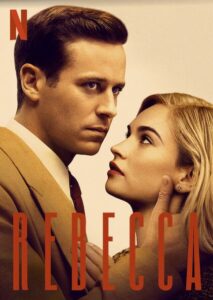 I wouldn’t call the new edition of this story anything like a relic, but it doesn’t seem entirely fresh, either. Lily James and Armie Hammer as the two leads generate more heat than did Hitch’s cast, with the age difference between them much less of a deal than the last film. James’ new Mrs de Winter is also not quite so drippy, much less of a victim. She at least reads, if she hasn’t much life experience, and demands better for herself in the long run. 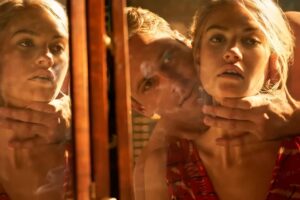 British indie maverick Wheatley (Free Fire, High-Rise) seems like an odd fit for material this mannered, a stately melodrama, but he gets his teeth into it well enough. The Monte Carlo sequence is all fancy cars, linen slacks, and sunshine, and Ann Dowd as Miss Van Hopper is great — a little nastier than her predecessor. Once the newly marrieds repair to Manderley, James’ misery in the big old house is palpable, and as Mrs Danvers, Kristin Scott Thomas is impressively brittle — though the presence of the dead wife is less a creepy haunting and more of a bad memory, sustained by the people left behind more than the manor’s bones. 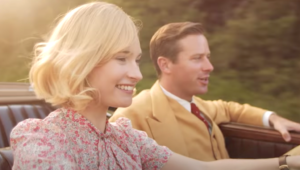 Hammer’s Maxim is less defined than Olivier, which makes his secrets and behaviour somehow less forgivable, and her unquestioning love of him harder to understand. A different ending doubles down on that confusion, but Wheatley’s commitment to his vision carries the day. He runs with a budget likely much larger than anything he’s had before, enjoying a lush, almost psychedelic palette of colour, which helps enliven things. Overall, his film is fine — maybe not essential, but pleasingly diverting none the less. 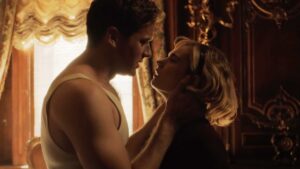 The only question I have is why (in this version) does Maxim keep a book of love poems from Rebecca in his car’s glove box?