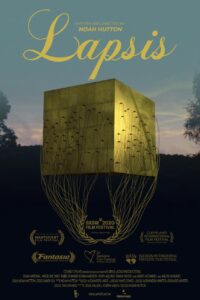 A deliciously grim tech comedy, Lapsis imagines a near future — which is today, let’s face it — where grunt workers who labour for a massive computer conglomerate compete against each other, and automatons,  by stringing cables through the woods between cube hubs. Think of it as an especially sharp episode of Black Mirror, with its nihilistic dread replaced with a streak of humanistic socialism. 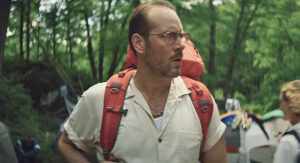 Ray (Dean Imperial) is a dude whose personal brand is described as “1970s gangster,” which is reasonably accurate. If you close your eyes you can hear Tony Soprano in his vowels. He’s  frequently on the skids, and not beyond doing a little favour for “friends” who need it, including Felix (James McDaniel), who sets Ray up with a medallion, basically a pre-existing ID with this cabling company — provided Ray cuts him in on 30% of the profits — and apparently there is money to be made.

Ray needs it. He’s the primary caregiver for his half-brother, Jamie (Babe Howard), who’s suffering from the mysterious Omnia, described as something like Chronic Fatigue. Jamie’s condition forces Ray to put him in the care of a clinic, run by a doctor played by Arliss Howard — so you know he’s not to be trusted. Ray figures he’ll do the cable work — which requires he hike through the woods all day — and use the cash to pay Jamie’s medical bills. 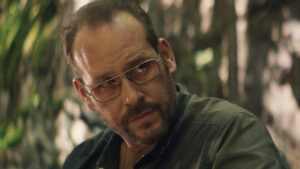 While this picture does have some things in common with the forthcoming Nomadland, and with the sci-fi satire, Sorry to Bother You, the stakes are definitely in the Breaking Bad range. This is an American story, where everyone’s trying to make a buck and big tech is there to suck whatever profit it can off the sweat of the workers. Those workers, Ray discovers, aren’t happy with their lot, especially as they’re asked to compete with robot drones (that look like deadly Runaway escapees) also stringing cable and undercutting their opportunities. Ray finds another cabler with a personal stake, Anne (Madeline Wise), who helps him tune in to the worker revolt. This while Ray’s hiding the fact his medallion used to belong to a disavowed cabler who went by the name “Lapsis Beeftech”.

Now, some of this plotting is a little confusing, and occasionally clumsy. Ray is a vivid character, but his arc isn’t especially well defined. Also, Anna’s connection to the larger conspiracy isn’t entirely spelled, either, and a hoped-for emotional payoff never arrives in a head-scratching conclusion. What is clear is the allegory,  the very “us against them” tone of it all. 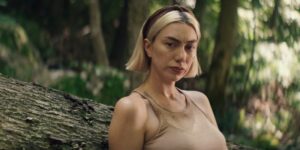 The point here is Lapsis is a clever, funny puzzle of a movie, with more than enough ideas to hold the interest throughout — taking well-aimed shots at late capitalism, big tech, and a money-grabbing medical establishment. Anyone in Canada without coverage managing a chronic illness that requires medication? Or working in the gig economy with no promise of a full-time job on the horizon? You’ll see yourself in Lapsis.