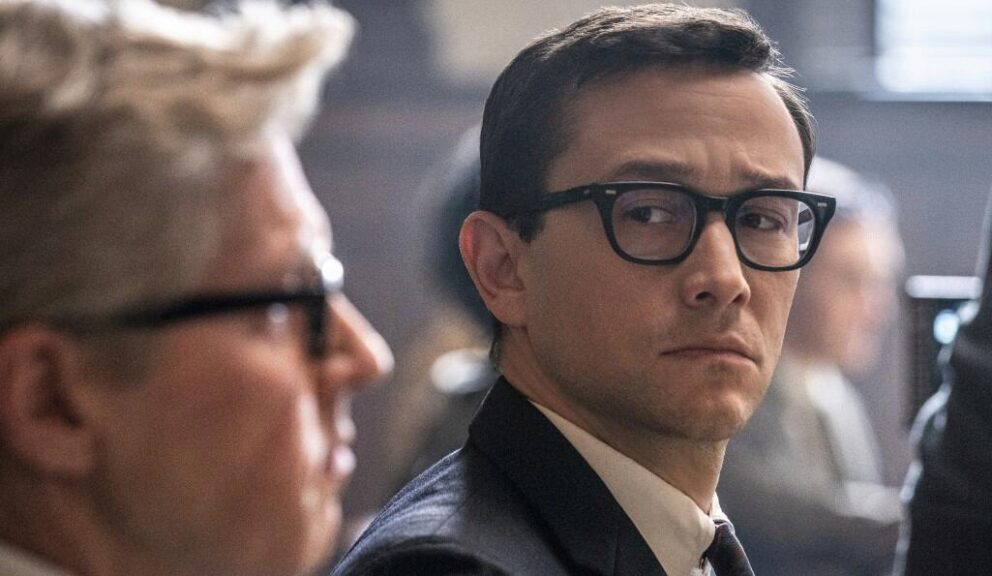 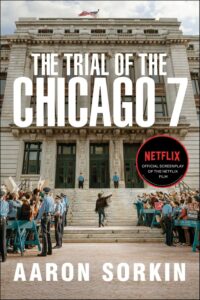 When your name is used to describe a certain speaking and writing style, you know you’ve made some kind of contribution to culture. Aaron Sorkin has done that with “Sorkinese,” that distinctive, witty, politicized and rapid dialogue, perfected years ago on his TV series, The West Wing. It was utilized with sparkling skill in the scripts for The Social Network and Moneyball, but a lot less so in that Steve Jobs biopic he wrote. As a director, I found things to like about his first feature, Molly’s Game, but a lot of that was soured by the daddy-issue subplot. 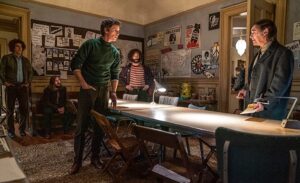 The Trial of the Chicago 7 is a wordy, largely static courtroom drama that ends up being a statement on the power of justice and shared causes. While perhaps not quite as sharp,  it echoes another one of Sorkin’s great scripts, the one he wrote for A Few Good Men. And, yes, it’s packed full of Sorkinese.

This tells the true story, with a lot of fictional flourish, of the young radicals who crossed state lines to protest in Chicago at the 1968 Democratic National Convention, were arrested and subjected to a lengthy trial on trumped up charges suggesting they incited a riot. This while the evidence didn’t support it, nor that the seven in question even knew each other before the riot began. 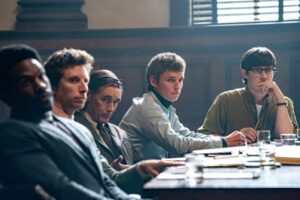 Sacha Baron Cohen delivers the flashiest performance as Abbie Hoffman, the attention seeker who rubs Eddie Redmayne’s future California senator Tom Hayden the wrong way. Redmayne is fine, solid in his American accent, and recent Emmy-winner Jeremy Strong (for Succession) is especially convincing as Jerry Rubin. Around them Sorkin arrays a terrific collection of characters and not a weak link in their company, with Alex Sharp, John Carroll Lynch, and Watchmen‘s Yahya Abdul-Mateen II amongst the accused. Mark Rylance is defence attorney, William Kunstler, Joseph Gordon-Levitt is the even-handed young prosecutor, Richard Schultz, and we get a monstrous turn from Frank Langella as the deeply set-in-his-ways judge presiding over the case, while the cherry on top of this acting sundae is a delicious cameo from Michael Keaton. 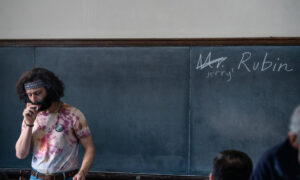 But, yes, it is a sausage party — even one prominent female role would’ve been welcome — and taken as a whole, it’s pretty conventionally structured. Anytime we leave the courtroom, Sorkin’s limitations as a filmmaker are present and accounted for. He’s got no imagination with crowd scenes, which all look staged, even while improved on by brief shards of black and white archival footage. Some of his music cues are painfully hokey, and he struggles a little with keeping his film locked down in anything authentically resembling the time and place — the lighting, hair, and wardrobe never quite sustains the illusion of the late ’60s.

But when Sorkin sticks his characters in a room and gets them talking, his film smokes and catches fire. His status as a world-class writer is nothing to sniff at, and his material mirroring America’s current day despite its 50+ year-old setting is nothing short of impressive. 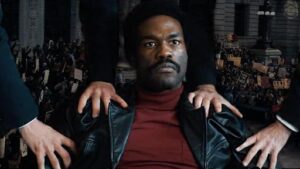 What the film does best is show how people from different backgrounds find a way to coalesce behind a cause they all believe in while coming at it from different angles. There’s a lesson here for anyone looking for allies in the fight for justice and equality.